Management of pest species via a native predator is a sustainable practice that promotes natural predator-prey relationships in agroecosystems. Previous studies have shown that raptors can reduce rodent and bird prey abundances. The American Kestrel is a widespread species of falcon that has shown long-term population declines due in part to loss of natural nesting cavities; however, kestrels readily use nest boxes, which allow for breeding in areas that may provide valuable hunting habitat, such as agricultural areas. Farmers can therefore easily install these low-cost nest boxes to attract breeding kestrels. However, the use of kestrels for agricultural pest management has received limited investigation.

New nest boxes installed in Michigan cherry orchards since 2012 have been used extensively by kestrels. In addition, my early dissertation research has shown that these kestrels kill known pest species. We have since installed nest boxes in additional orchards, and we installed artificial perches in some orchards with boxes. We have conducted surveys of fruit-eating birds and rodents in orchards. We have also used video recording systems to document the prey delivered to kestrel nests during the 2013 – 2016 breeding seasons. Finally, we have tracked the movements of female kestrels using GPS data loggers. We are in the process of analyzing this data in order to quantify the effects of kestrel nest boxes and perches on prey.

My 2014 telemetry study of orchard use suggests that kestrel activity in orchards is based on activities at the nest box rather than consistent hunting in the orchard. I hypothesize that a lack of suitable perches, especially in young, open orchards with small trees, limits orchard use by kestrels. Furthermore, I hypothesize that increased kestrel presence will increase predation pressure on prey bird species.

Small mammal trapping that I conducted in 2014 indicates that Microtus voles are not present in high numbers in orchards during the summer; however, I hypothesize that snow cover provides adequate cover for voles in will result in higher abundances in the winter, when damage to trees is most likely. I will use small mammal camera traps to determine the effect of summer kestrel presence in nest boxes and the continued winter presence of perches on winter small mammal abundance in orchards.

I aim to estimate the prey removal efforts of kestrels using orchard nest boxes and develop models that can predict the number and types of prey that breeding kestrels will capture, as well as the size of the area from which prey will be captured.

We conducted 10 minute surveys along 200 m-long fixed-width transects. We conducted a total of 268 surveys over both years. We built models of fruit-eating bird counts and found that counts were significantly lower at sites with an active kestrel box. We did not find a significant effect of perches.

We have also analyzed video recordings of artificial perches in order to assess kestrel perch use. We randomly chose five orchards with active kestrel nest boxes in 2015 in which to install artificial perches. We built the perches from 6.4 m of steel pipe mounted on 1.2 m of rebar buried 0.9 m underground, resulting in a 5.5 m perch height. The perches themselves were 45 cm lengths of 2.54 cm-wide pine dowel attached to the pipe with a floor flange. We installed three perches per orchard; we placed perches within the orchard rows, usually in an open spot where a tree was missing. In 2015, we recorded each perch during daylight hours (06:00 – 21:00 EST) once per week. Kestrel use of the perches was significantly greater in orchard blocks with shorter trees. Kestrels mostly used the perches installed in the youngest orchard blocks; meanwhile, we conducted the fruit-eating bird surveys in mature orchard blocks where kestrels rarely used the perches. So although the perches in mature orchard blocks did not further reduce fruit-eating bird abundances, perches in young blocks could still provide benefits to the kestrels, particularly for fledglings as they leave the nest box (Figure 1). 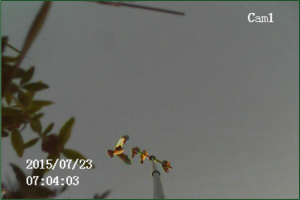 We detected no voles during the winter 2015 – 2016 surveys; all detections were of Peromyscus spp. (Figure 2). 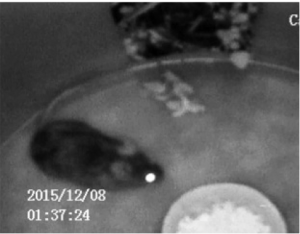 We built an occupancy model and found no effect of date, trap location (orchard edge vs. interior), or the summer presence of an active kestrel nest box on whether or not Peromyscus spp. were present at a trapping site. Lack of sustained snow cover during the winter of 2015 – 2016 prevented us from assessing the effect of snow cover on rodent presence.

We detected rodents during only 19 of 135 trapping opportunities, which suggests that either rodent presence in orchards was low (due perhaps to rodenticide use or lack of snow cover), or detections were low due to the camera trap setup.

We had planned to conduct more camera trap surveys during the winter of 2016 – 2017 in order to determine if rodent presence increased with snow cover, but the repeated lack of sustained snow cover led us to reconsider the usefulness of repeated surveys.

We are currently considering explanations for our results and recommendations for future research.

We have used video recording systems to document prey deliveries to kestrel nest boxes during the 2013 – 2016 breeding seasons. Proportions of prey types delivered to nests varied with year and nest box (Figure 3). We are currently finalizing models to explain the number of 1) total prey and 2) rodent prey delivered to a nest in a day. In addition to year and nest box ID, factors of interest in these models include: age of nestlings, growing degree days, precipitation, and the proportion of open habitat (non-forest, non-mature orchard landcover) in the potential kestrel pair’s home range surrounding the nest box. 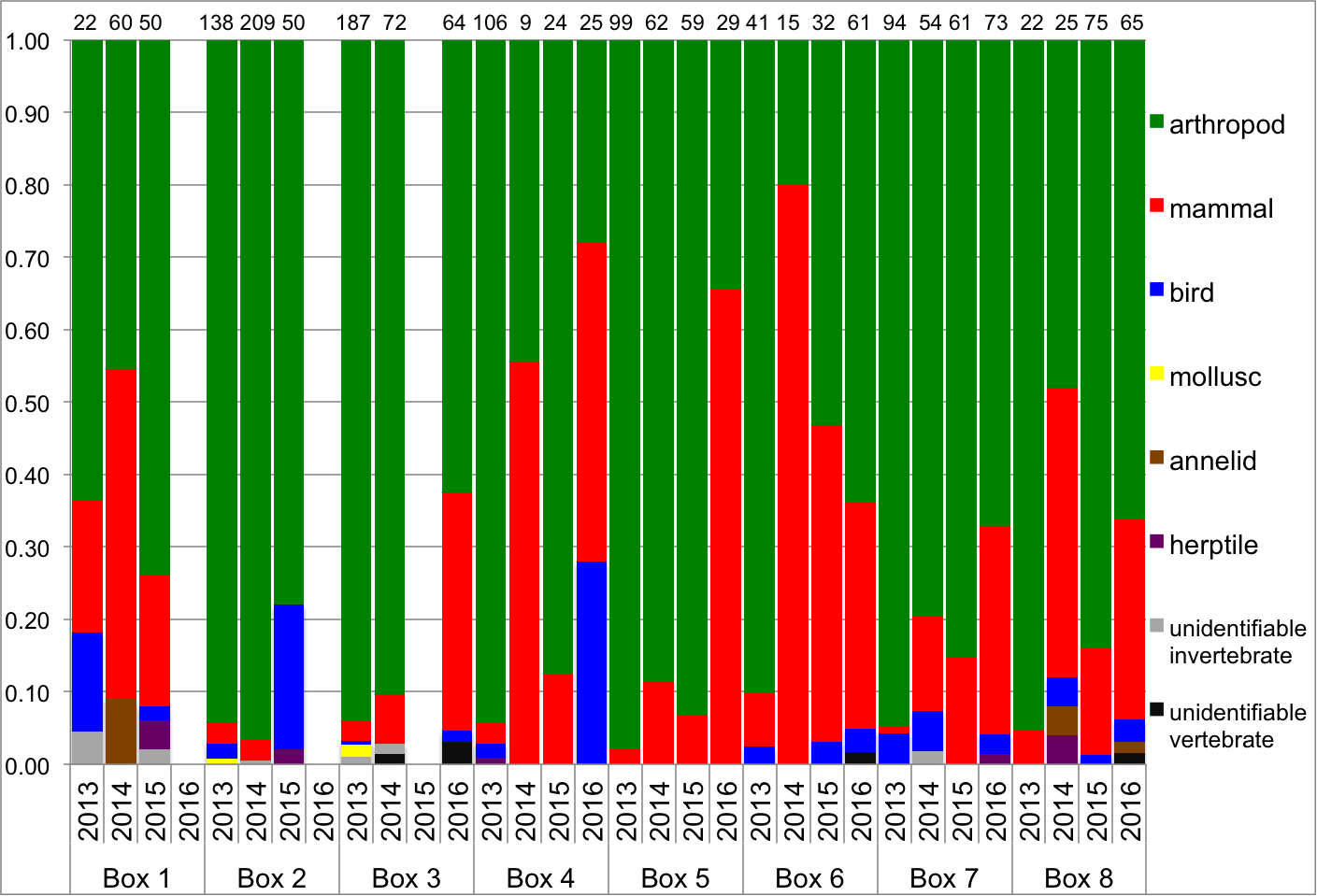 We also tracked 17 female kestrels using GPS data loggers during the 2015 and 2016 breeding seasons. We were unable to track males because we could not capture them in their nest boxes. We are currently analyzing the GPS data in conjunction with the prey delivery data in order to determine the distances a female kestrel travels from the nest box to hunt and to potentially identify habitat features associated with prey capture (e.g. sources of perches).

We have given presentations to grower and citizen scientist audiences:

At these presentations, we distributed a fact sheet on installing and monitoring kestrel nest boxes in orchards.

We have also distributed letters summarizing project results to growers involved in the project.

Finally, we are preparing manuscripts to be submitted in March and May 2017 for publication in peer-reviewed journals.