The use of plastic mulch is common in warm-season vegetable production in the North Central Region. Excellent in-bed weed control provided by plastic films make it particularly attractive in organic production, though weeds between plastic mulch beds (referred to as “inter-bed” hereafter) remain a challenge. Many organic growers manage inter-bed weeds through cultivation. However, with roughly 50-75% of a field covered with impermeable plastic, sediment loss and associated agrochemical runoff in the inter-bed area can be greatly intensified during rain events (Arnold et al., 2004; Rice et al., 2004; Wan and El-Swaify, 1999; Zhang et al., 2013). Erosion can be mitigated by keeping the inter-bed soil covered with dead plant residues or cover crop living mulches and benefit soil health through organic matter inputs. However, additional management challenges associated with these practices may offset the advantages (Table 1.1). Since the best inter-bed weed management strategy will depend on a grower’s specific management goals, identifying production and soil health tradeoffs associated with various inter-bed weed and soil management practices will aid growers in making management decisions best suited to their agronomic and environmental goals. This research seeks to identify these important tradeoffs of inter-bed weed management practices and equip organic vegetable growers in the North Central Region with the information necessary to optimize inter-bed management strategies for improved crop production and soil health. 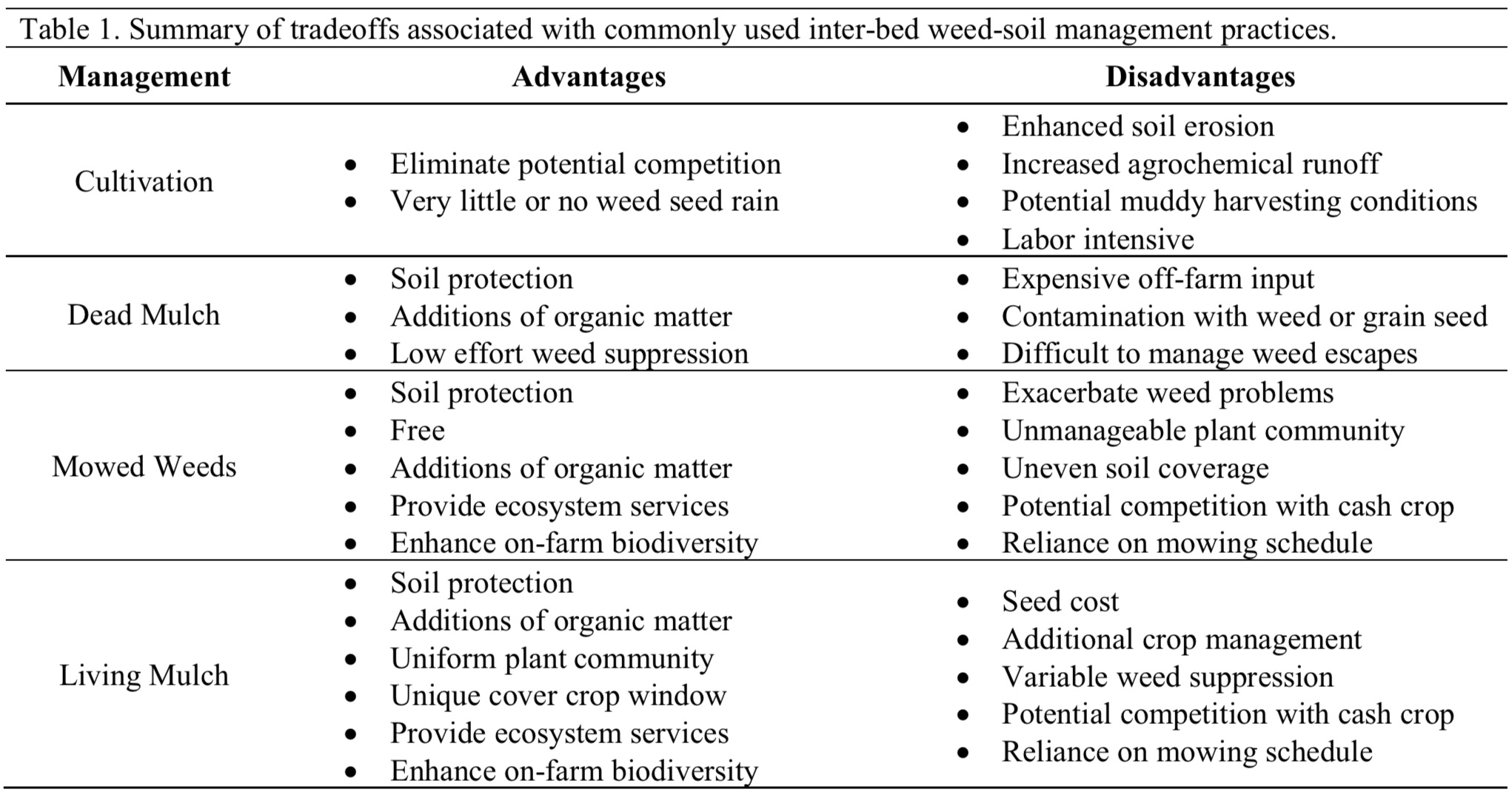 This research was inspired by organic growers’ frustrations with inter-bed weed management in plasticulture production, with specific interest in integrating a cover crop living mulch. In addition to the main trial outlined above a separate cover crop screen was conducted (funded by other sources) to evaluate ease of establishment, weed suppression, and biomass accumulation of various cover crop species. Seed of promising species (namely teff) from this screen were distributed to two growers in 2017 and six growers in 2018. Providing growers with the opportunity to try new practices on their farms helped us evaluate management constraints which can be difficult to identify in a research field. Through our work with grower collaborators we found that the adoption of integrated plasticulture-living mulch systems was primarily limited by labor demands. Poor living mulch establishment was also a constraint in some cases.

Teff seed was distributed to Matt Martin of The Martin Family Farm (Capac, MI) and Mike Yancho of Forgotten Harvest Farm (Fenton, MI) to plant as a living mulch between plastic mulch beds on their farms in 2017 and 2018. Both Matt and Mike were interested in planting cover crops in the inter-bed to manage weeds, reduce soil erosion, and improve harvesting conditions.

Mike was pleased with the weed suppression and soil coverage achieved with teff in 2017. However, these results were not replicated in 2018, likely due to delayed planting of living mulch in that year resulting in weed escapes and poor establishment. Even though Mike experienced mixed results, he has commented that the potential benefits are worth the risks, and plans to continue the practice in the future.

Matt had limited success with teff, primarily because it needed to be mowed multiple times during the season, and labor shortages did not allow for timely management. Matt also experimented with buckwheat between plastic mulch beds and found it was easier to manage than teff because it did not regrow after mowing. Matt was also pleased with the level of weed suppression he was able to achieve with buckwheat. Matt continues to plant buckwheat between plastic mulch beds on his farm.

Teff seed was distributed to an additional four growers in 2018 with limited success. Having to manage the teff throughout the growing season was a major constraint for most of the collaborating growers.

The goal of this project is to evaluate the systems-level effects of different between-bed management strategies for vegetables grown on PM. The results from this study will provide detailed information regarding the functioning of individual parts and the system as a whole which will help farmers make informed inter-bed management decisions in PM systems to improve crop production, soil health, and environmental sustainability.

We anticipate the current study will result in the following outcomes: