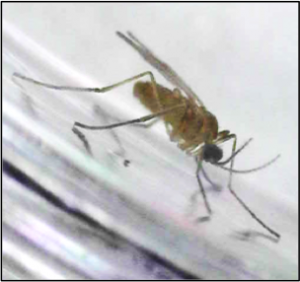 Swede midge (Contarinia nasturtii; Diptera: Cecidomyiidae), a small galling fly, is an invasive insect pest of Brassica vegetable crops that is threatening the livelihood of organic vegetable growers in the Northeast (Fig. 1). Adult flies lay their eggs into the growing points of their host crops, including broccoli, kale, and cabbage, and larval feeding causes distorted growth of the plant (Fig. 2). 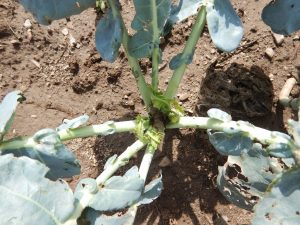 There are currently no effective organic management strategies to defend against crop damage from swede midge. Growers in effected areas in the Northeastern U.S. are experiencing devastating crop loss, to the point that some are considering abandonment of Brassica vegetable production entirely, and others are turning toward calendar sprays of neonicotinoid insecticides to protect conventionally grown crops. Pheromone mating disruption (PMD) is a promising tactic that has been very successful for pests of other horticultural crops and involves the release of large quantities of insect sex pheromones to confuse males so that they cannot locate their mates. The natural, attractive pheromone blend for swede midge is too costly to be commercially feasible for PMD. Cheaper, chemically similar, repellent pheromone variants are available for swede midge, but their efficacy for PMD is unknown. This project will challenge the assumption that the most attractive pheromone blend for an insect is the most effective for mating disruption, and will compare the behavioral effects of the natural blend with lower cost, repellent blends. Evaluation of pheromone blend efficacy to prevent yield loss in the field and an understanding of their mechanisms of disruption are necessary to develop recommendations for a commercially-viable PMD system for swede midge.

Objective 1. Test the ability of pheromone blends to elicit non-competitive mechanisms of disruption.

We aim to test the effects of natural, racemic, and reduced-component pheromone blends on both male and female behavior using laboratory and field trials to inform us of the mechanisms responsible for mating disruption. Pheromone blends that both impair male ability to locate mates and reduce female receptivity to males will be the best candidates for PMD.

Objective 1.1. Compare the abilities of pheromone blends to desensitize males and to impair their ability to locate females.

We will pre-expose males to field-relevant, high doses of pheromones, and then observe their ability to find females in a pheromone-free laboratory environment. We will create dose-response curves that include percentage response rates to females following varying pheromone doses. We will test if significantly fewer males are able to find females after being exposed to different pheromone blends. The most promising pheromone blend candidates for cost effective PMD will impair the males’ ability to locate females at both low and high doses. 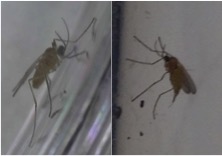 Objective 1.2. Test the effect of large doses of pheromones on the reproductive behavior of female midges.

To test whether large doses of pheromones influence female reproductive behavior, we will observe female pheromone-releasing behavior, or “calling,” and their propensity to mate during and following pheromone pre- exposure in fields treated with the different pheromone blend treatments (Fig. 3). Pheromone blends that delay or reduce calling and render females unreceptive to males will enhance the efficacy of a PMD system. 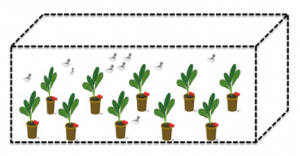 Objective 2. Test the effect of swede midge population density on the efficacy of pheromone blends for mating disruption in enclosures.

We will compare the abilities of natural, racemic and one-component pheromone blends to disrupt mating and reduce crop damage in enclosures set up in the field containing varying numbers of midges (Fig. 4). A key outcome of this objective will be the selection of the pheromone blend that is effective in reducing crop damage when swede midge population densities are both low and high. 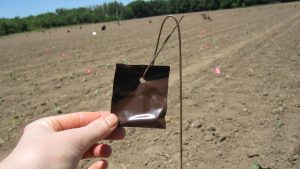 Figure 5. Pheromone dispenser in the field

The proposed projects were primarily in the planning phase in 2016. We have not yet received funds to purchase supplies for experiments.