In this exploratory research project, we will test the applicability of the STAR accelerated lambing system to a total dairy situation for meat sheep. We will milk 36 participating Finnsheep and Dorset crossbred ewes managed in 3 groups for 9 consecutive short lactations (73 to 103 days) throughout the 2-year period of this experiment. Each of the 3 groups will lactate 3 times in the study period. We propose that this system can achieve equal or higher milk yields than possible with one annual dairy sheep lactation. Given the high expectations on the productivity of these ewes, namely high milk yields, the ability to breed out of season, and a high number of offspring, optimal nutrient availability is crucial. A cornerstone of this study is to benchmark ideal dietary fermentable fiber levels to enable the participating ewes to maintain their ideal body condition while being highly productive. The goal of this research is threefold: 1) Provide sheep dairy farmers with a management blueprint for an alternative year-round management system that allows for a more stable income, 2) to offer possibilities to add a second value to existing sheep farms (dairy or meat) to be able to sell more product, and 3) to provide accurate and ideal dietary guidelines for sheep managed under an intense, accelerated system. 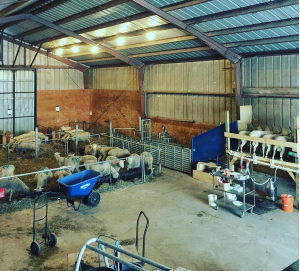 The objectives, performance targets, and their progress to this date are as follows:

We started to milk the first group of 14 ewes on 24 October, 2016. The sheep were randomly assigned to three dietary groups, differing in the levels of potentially fermentable fiber in the ration: 30, 35, and 40% respectively. The diet consists of a concentrate mixed out of soy hulls, corn meal, soybean meal, salt, and minerals, and gets offered free choice. They also receive a restricted amount of hay. We collect milk weights of every individual ewe at each milking, twice a day at 7am and 5pm. In addition, we collect 8 observations per dietary group twice daily before milking, namely amount fed for concentrate and hay as well as amounts refused for concentrate and hay. This data will allow for exact conclusions about ideal fermentable fiber levels when statistically analyzed at the end of the two-year period.

This first lactation of the first of the 3 STAR groups this fall is considered a trial run in which we had the chance to refine the experimental design and assure the proper set-up of facilities and data collection tools. We have not yet collected behavioral data but will start doing so with beginning of the lactation of the 2nd group of ewes in January 2017.

We are consistently recording any health issues and the animal’s response to treatment. This data gets entered into the Cewe database, and will be complementary to the final statistical analysis.

We are recording lambing data, as well as average daily gains of the born lambs. This data gets entered into the Cewe database and will be complementary to the final statistical analysis.

Objectives 5 through 7 will be part of, and result, of the final data analysis at the end of the two-year research project. Since we only started the project in late October we are not able yet to make any statements about these objectives.

The milking equipment, including a milking platform with a 6-stanchion head gate, the vacuum compressor and vacuum line, as well as the separate dietary group pens were set up in the Cornell teaching barn in September. The first group of gestating ewes moved to that facility in October and started lambing on October 23, 2016. The data collection (ewe and lamb weights, lambing data, milk weights) started on this day, the amount fed and feed refusal observations were recorded starting two weeks into the lactation period. The milking and feeding chores take about 2 hours for each shift, mornings and afternoons.

During November, 7 undergraduate students were trained to milk and feed the 14 ewes in the first group, and by the end of the semester were able to perform the required tasks in teams of 2 without supervision. These students will continue to work on this project next semester.

In November we started collaborating with Dr. Dave Barbano from the Cornell Food Science Department. We now collect milk samples from every individual ewe once a week on both daily milkings, Dr. Barbano analyzes these for protein, fat, somatic cells, and fatty acid composition. This will allow for detailed insight into the effect of the dietary fermentable fiber levels on milk composition.

We initially expected to take away the lambs from the ewes right after birth, bottle feed colostrum, and dry them off by hand. However, we discovered that milk let down is far easier to achieve for the ewes when the lambs are allowed to stay on their dams for 12 hours, get licked dry, and receive their colostrum directly from their mothers. This is now standard protocol. We also started injecting oxytocin at the first two machine milkings, since this seems to further support subsequent milk let down, and high milk yields in the parlor.

Training the ewes to walk up the platform for milking at eases and on their own took with close to 3 weeks longer than expected, surely due to the fact that including the undergraduate students 10 people were involved in the daily chores. This might have added additional stress for the meat ewes resulting in reluctant behavior. Other than that we did not experience surprises or changes in the initial set up. With this trial run we set a good foundation for effective ways of data collection over the next two years.

With the data collected over the next two years we will be able to update the SheepFlock management tool for dairy and meat sheep production. This will allow sheep farmers to make exact predictions when planning new business ventures or a change in production. This tool will be accessible as open source software on the Cornell Sheep Program website. Surely this can have a high impact for farmers wanting to produce sheep products year round, and help with achieving a steadier income. Subsequently this will allow for more production, meat and milk, and by that generate new markets, and marketing possibilities.

At the 22nd Annual Dairy Sheep Association of North America Symposium held at Cornell University, 2-4 December 2016, the graduate student researcher gave a presentation about this project and its cornerstones and outlook. This presentation entailed a publication in the conference proceedings, 12 Fermentable Fiber for Milking Sheep on the STAR System. The attendees of the conference were able to observe milking, and tour the teaching barn facilities. Overall this can be evaluated as solid groundwork for potential future impact on farm practices, since this research attracted the interest of many attendees.

Cornell undergraduate students were able to directly participate in research and data collection. Not only were they able to acquire livestock handling experience, they learned how to milk sheep, and handle a feeding trial. According to the received feedback this had a high impact on the learning experience of the participating students.