Peach (Prunus persica) production in the United States was valued at $629.1 million in 2014. Sesiid borers, the peachtree borer (Synanthedon exitisoa) (PTB) and the lesser peachtree borer (Synanthedon pictipes), account for more damage to North American peach production than all other species combined.  While male-oriented monitoring and control strategies (mating disruption, mass trapping, etc.) are common thanks to the development of pheromone lures, the efficacy of such strategies is questionable.  However, female-oriented strategies overcome problems with multiple matings and more directly reduce the damaging larval population.  It is likely that female PTBs rely heavily on olfactory stimuli in selecting suitable oviposition sites.  This study applies metabolomics, behavioral, and physiological assays to examine the role of Prunus volatile emissions in the host finding behaviors of the PTB, with the expectation that pest management strategies in organic and conventional orchards will be improved as a result.

This project examines the interaction of adult female PTBs and the complex mixture of volatile organic compounds emitted from optimal and suboptimal oviposition sites, with the expectation that such information will inform the development of female-oriented PTB lures.  Accomplishing this goal requires the integration of analyses from the realms of metabolomics, animal behavior, and electrophysiology in the laboratory to develop attractive lures, and a subsequent field test of lure efficacy.

With this in mind our primary objectives are:

Over the past year we have: 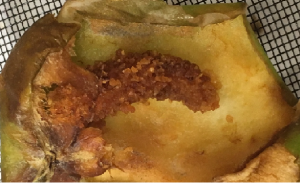 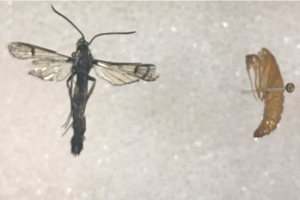 This project is expected to improve the timing of pesticide regimes in peach orchards by allowing growers to ascertain when egg-laying is actually occurring.  It will also facilitate the deployment of female-oriented mass trapping/attract-kill strategies.  Thereby reducing overall pesticide use.

Despite early difficulties, we have established a sizable colony and expect to collect behavioral and electrophysiological data shortly.  In the meantime we have optimized our metabolomic parameters and noted a plethora of previously undocumented terpenoids, including phellandrene, pinene, cymene, and humulene as major constituents of peach bark volatile emissions.  Additionally, major species (such as dimethyl-nonatriene) are not present in bark.  Since PTBs oviposit on the lower trunk (from which our samples were collected), rather than newer shoots (as were sampled in previous studies), we expect that some of these differences will prove to be behaviorally relevant.