Managing a robust pasture ecosystem and optimizing available forage in sub-arctic conditions in interior Alaska is a challenge.  The region is characterized by a short growing season, slow decomposition rates and undeveloped soils that are sensitive to compaction and erosion. In addition to the extreme climactic conditions, agricultural production has remained largely undeveloped due to limiting factors such as transportation challenges, high cost inputs and competition from the high yields and low prices from the continental United States. Livestock producers in Alaska use mainly unmanaged, continuous grazing practices. This has resulted in a heterogeneous pattern of pasture use; with animal feeding preferences creating patches of both over- and under-utilization, and degradation. At USDA and SARE-sponsored conferences and workshops, livestock producers have emphasized the need to develop sustainable grazing strategies that are appropriate for high latitudes and make the most of their resources.

The goal of this research was to examine the relative role of grazing mechanisms: herbivory, trampling, and dung/urine deposition on subarctic pasture productivity and ecosystem services under a simulated, intensively managed rotational grazing (IMRG) regimen. To evaluate the impacts of IMRG, a full factorial experiment of simulated trampling, muskox dung/urine deposition (muskoxen are an indigenous agricultural species), and forage clipping, mimicking IMRG timing and intensity, was conducted at the Robert G. White Large Animal Research Station, University of Alaska, Fairbanks. The treatments were applied to 96-1 m2 plots in two established pastures with different soil types over the 2014 and 2015 grazing seasons. Changes in soil biota communities and abundance 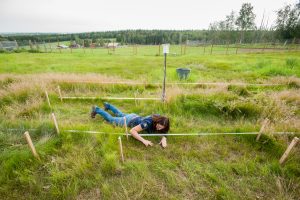 , physical and chemical soil characteristics, plant biomass, and plant community composition were measured from one and two years of treatment applications to evaluate the potential suitability of IMRG for livestock farms in interior Alaska. Results of plant biomass showed that herbivory and manure, and the herbivory, manure, and trampling treatments have a marked impact on biomass productivity (p<0.05). In addition to increased biomass production, we observed soil responses in increased nitrogen cycling and improvement in the Haney calculation of soil health (p<0.05) after two years of manure and trampling, and herbivory, manure, and trampling treatments. This research served two purposes; to evaluate the relative roles of grazing disturbance mechanisms on sub-arctic soil and plant health and to gain insight to the plant and soil responses of IMRG regime.

Healthy, productive pasture ecosystems are the key to providing high quality forage for raising livestock and minimizing dependence on purchased feed. Grazing is the main biotic disturbance regime on pasture ecosystems (Wang, 2006). This biotic disturbance affects plant composition, nutrient cycling, hydrological pathways, soil structure and soil biota communities of pasture ecosystems (Teague et al., 2011). Grazing pressure is heterogeneous due, in large part, to livestock preference for certain plant species, preference for new growth due to their high ratio of soluble to structural cell plant tissue, ease of access, and proximity to water (Briske et al., 2008). When livestock have unlimited access to the pasture area over the course of the growing season, as is common in continuous grazing regimes, patches of the landscape exhibit both over and under-utilization (Barnes et al., 2008).

Over-utilization and pasture degradation can result from higher than recommended grazing pressure, even if the stocking rate is conservative for the area of land available. Visible signs of these effects in the plant community are monocultures, invasive plant infestations, and/or bare ground. Soil compaction, puddling, water runoff, and erosion are indicators of pasture degradation. As plant communities, litter cover, and the soil structure change due to variable grazing disturbance, soil biota communities experience changes in available nutrients, water availability and physical habitat structure (Wang et al., 2006). Changes are ultimately feedback to impact plant production (Wang et al., 2006).  The pattern of pasture over and under-utilization by livestock (or heterogeneous grazing pressure) can lead to a positive feedback loop of over grazing and degradation of pastures, even under light grazing pressure (Barnes, Malechek, Maeno, & Norton, 2008; Teague et al., 2011).

Grazing management regimes manipulate herd size, grazing area, length of grazing period, and timing of the area rotation to balance maximum forage removal and maintain ecosystem health. These practices vary from allowing unfettered access to large pasture areas over the course of years to the daily rotation of a herd in different paddocks. The grazing management regime known as intensive managed rotational grazing systems (IMRG), holistic management, or the Savory Method, proposes to mimic the short but intense grazing of wild, migratory ungulates. Wild ungulates historically grazed in vast herds across grasslands, utilizing any available forage but constantly moving due to pressures such as predation and water availability (Savory, 1983). This method is purported to increase the carrying capacity of the pasture land compared to traditionally recommended continuous grazing levels, while enhancing healthy ecosystem function (Teague et al., 2011). Intensive short duration rotational grazing models the grazing patterns of wild ungulates by stocking sections of the land at a high density and moving the herd from section to section (or paddock) at varying rates throughout the growing season, based on forage utilization and plant growth rates rather than following rigid schedules (Savory, 1983; Teague et al., 2011; Barnes et al., 2008).

Some studies such as Teague et al (2011) found that stocking rate could be maintained at the equivalent of a heavy continuous stocking rate using IRG, while maintaining ecosystem function. Other studies have reported inconclusive results (Teague et al., 2011; Barnes et al., 2008) that varied from maintaining a slightly higher stocking rate but a net financial loss due to increased labor and fencing costs, no difference between IRG and other grazing regimes, to a decrease in livestock and plant production when compared to continuous grazing (Briske et al. 2008; Barnes et al. 2008).

Grazing disturbance can be divided into three mechanisms that interact with the layer of soil associated with plant roots and soil organisms, or rhizosphere: herbivory, dung and urine deposition, and trampling. The significant spatial and temporal variability in geographic regions represent a limitation to predicting pasture ecosystem responses to grazing disturbance. Neither the relative effects nor the interaction between herbivory, dung and urine deposition, and trampling are frequently examined (Kohler, 2005; Sorensen, 2009). The ability to understand and anticipate the impact of grazing components on soil structure and soil biota communities is an important first step to understanding the role of grazing on pasture productivity and ecosystem function.

While the subarctic and arctic regions are well suited to grazing and support some of the largest herds of wild ungulates in North America, livestock production has remained largely undeveloped in Alaska (Meter, 2014). Available pasture lands are small in size compared to other states (Agriculture, 2009). This constraint of space, coupled with the extreme climate, a short growing season, and economic limitations makes efficient grazing management a matter of critical importance in the circumpolar north.

The goal of this study was to evaluate the effects and interaction of simulated herbivory, manure/urine deposition, and trampling (following IMRG methodology) on subarctic pasture responses, both above and below ground. We have documented regionally specific baseline information and begun to address some crucial knowledge gaps through the following objectives:

Determine how an intense but brief simulated grazing disturbance affects the physical and chemical components of pasture soils and plant biomass production.

The project is in the final stage of analysis and manuscript preparation. Initially, the proposed research was comprised of 48 plots that were to be treated for two years. After the first year of implementation the study was expanded and 48 additional plots were added to evaluate the treatment effect after one year of implementation. This allowed us to replicate the study temporally as well as spatially.  All other aspects of the study were carried out according to the methods and materials section of the research proposal. Soil samples were analyzed by Ward Laboratories using PLFA and Haney tests in the spring and fall of each year. Biomass data were collected throughout the study. Plant species composition changes and soil compaction measurements were taken in May 2014 and September 2015.