Identification of peony diseases in the Pacific Northwest and Alaska

Early-season collections of foliage were made in Washington, Oregon, and Alaska to identify the diseases most prevalent prior to and immediately after flowering.  These disease surveys indicated a wide range of fungal and fungal-like plant pathogens present in the fields surveyed, with different diseases being more/less prevalent in different fields.  One of the newly-discovered pathogens of peony, Mycocentrospora acerina, whose finding in the United States by the graduate student provided justification of this grant, was prevalent this year in both Oregon and Washington farms.  The Facebook page, a part of the outreach initiative of this grant, has been successful at reaching peony farmers in the Pacific Northwest and outside of the study region as well.  The page currently has 163 followers who actively comment on postings from the graduate student and who also post photos of disease issues they are observing.  Examples of Facebook posts are attached for inclusion in this report.  Additional surveys are still being conducted, including 10-day trip that has been planned for the end of July to visit peony farms throughout Alaska.  Furthermore, the graduate student and PI have been invited to present at the Alaska Peony Grower’s Association conference in January in Fairbanks, AK.

Objective 1. During the spring and summer of 2016 we will conduct surveys to obtain diseased foliage and solicit additional foliage to be collected by peony growers. Collections will focus on at least 30 growers in Alaska, Oregon, and Washington; however, they will extend to other Western states as identified during the course of the study.

Objective 2. We will attempt to isolate causal organism of disease using traditional fungal and bacterial isolation methods. The isolated organisms will be maintained in-vitro in petri plates containing the appropriate growth media.

Objective 3. We will use a combination of morphological and molecular methods (PCR and sequencing) to positively identify the suspected causal organisms of disease. If suspected pathogen is viral, samples will be submitted to a commercial virus screening laboratory for identification.

Objective 4. We will perform Koch’s postulates on live plants and detached peony tissues to determine pathogenicity of the organisms.

Objective 5. We will prepare and disseminate information regarding the peony pathogens. Such educational material will include an extension bulletin published through Washington State University and/or the University of Alaska Fairbanks, a workshop conducted in Alaska, and first reports published in peer-reviewed journals.

Objective 1—Samples were collected from 5 farms in Washington, 2 farms in Oregon, and 2 farms in Alaska. Two one-day trips have been taken to collect the samples in Washington and Oregon, whereas the samples from Alaska have been mailed to us at our research station in Washington.  We have also conducted regular surveys on the plant material at our research station.  In addition, the Facebook page (part of the outreach component of this grant) allowed us to make contact with growers throughout the United States, and we received and isolated from samples (supported by another grant) from 4 additional states.

Objective 3—A combination of morphological and molecular techniques were used by the graduate student to identify 5 different fungal and fungal-like organism that were isolated from peony tissues collected at the 9 Pacific Northwest peony farms.  The organisms included: Botrytis spp., cause of Botrytis gray mold; Graphiopsis chlorocephala, cause of peony leaf blotch; Colletotrichum spp., cause of peony anthracnose; Mycocentrospora acerina, cause of peony red spot; and Phytophthora cactorum, cause of Phytophthora root rot.  One of the most prevalent early-season species causing disease was M. acerina, a pathogen that has not yet been officially reported in the United States.  The most prevalent diseases at our research station was peony leaf blotch.

We have accomplished early-season surveys of peony plantings in Washington and Oregon and have been sent additional samples from Alaska.  We have isolated from 82 samples and identified at least 5 peony pathogens infecting peonies so far in the 2016 growing season.  The outreach initiative of the Facebook page has been successfully developed and has yielded responses from growers, including posting of their disease problems.  Growers are actively engaging by asking questions about symptoms, disease development, and disease management.  The page currently has 163 followers, many of which live in Alaska.  This number is up from 111 when our interim report was submitted.  The URL for the Facebook page is www.facebook.com/WSUpeonies.

Many of the pathogens we have collected and identified represent first reports in the region, including M. acerina in Alaska and Washington, P. cactorum in Oregon, and G. chlorocephala in Washington and Oregon.  DNA sequence data has been collected for these pathogens for future deposition in the GenBank databases and isolates have been stored for future use in pathogenicity trials.  Growers have been able to obtain useful information from the graduate student regarding peony diseases through the photographs that she has posted as well as through answering questions posed to her on the Facebook page.  Examples of Facebook posts have been attached. 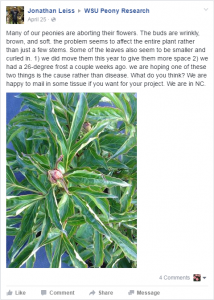 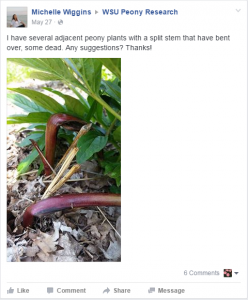