Our preliminary year of 2012 and our first full year of 2013 proved to be challenging with great successes and incredible challenges for this cover crop project. We had to completely rethink the direction of our work with radish, but we were also able to intermate eight accessions identified as especially noteworthy to form a new composite radish population.

Progress with cowpea as a cover crop was rapid, and we found about a dozen accessions for regional evaluation in 2014 after farmers and agronomists chose what they saw as the most promising. There were crop failures with cowpeas at two sites, but we continued to learn a great deal about this crop. Wet, cold weather also made our work with radish very difficult, but our second season of mating did return us enough seeds for continued seed increases with a new population. In 2015 we continued radish work via an organic, on-farm seed increase in North Dakota, radish demonstration plots at three university centers, and an initial evaluation of our intended method for rapid radish breeding in the upper Midwest.

Cowpea evaluations were planted at five locations in 2015, and in 2016 at three more, although hail destroyed one of them. Initial seed increases for commercial production of cowpea began in 2016, and we also carried out an initial evaluation of our radish population with several that are currently available commercially. We found several very promising cowpea accessions that are moving towards commercialization and further breeding opportunities thanks to regional trials and input from farmers, researchers and seed producers. Our radish work is further behind, but the new composite population is available for increase for initial cover crop seed sales in a couple years, and we have begun mass selection for the cover crop type we need in the North for eventual release of an improved version.

The use of cover crops continues to increase as farmers seek to improve soil quality, reduce chemical inputs, and maintain profitability. Research and grower experiences in the North Central Region have demonstrated that cover crops can help to achieve these benefits, and the Environmental Quality Incentives Program (EQIP) program has payments for cover crop practices. The National Organic Program’s (NOP) regulations on annual seeds (including cover crop seeds) state that organically grown seeds must be used, when commercially available. Organic, low-input farmers frequently lack seed varieties that are adapted to their cropping systems, and demand for certified organic cover crop seed is greater than supply. Therefore, organic, cover crop seed is often expensive or unavailable for organic farmers seeking to employ them for sustainability benefits. A change is needed.

Most cover crop research has focused on documenting benefits and management, emphasizing proper choices of cover crop species and management to maximize benefits and reduce problems. However, little attention has been paid to varietal selection within species and to seed availability. Most cover crop seed is sold by species, not variety, marked VNS (Variety Not Specified). This can result in unknown traits and performance from the seed, and there have been failures of cover crop seed in the North Central Region due to poor adaptation of unidentified cover crop varieties.

The Northern Plains Sustainable Agriculture Society (NPSAS) Farm Breeding Club (FBC) was formed with the purpose of fostering farmer collaboration with public breeders and research agronomists in the evaluation and development of crop varieties suitable to organic and low-input farming systems.

The FBC chose to work on radish and cowpea as cover crops after Burleigh County farmers identified them as priorities in their no-till systems. Forage radish, a cool season cover crop, and cowpea, a warm season cover crop, not only enhance soil quality but can serve multi-purpose roles as cover and fall grazing crops. In addition, both species winter-kill, presenting no carry-over issues in the following year’s crops and providing no-till and organic farmers with an ideal seedbed. To meet these needs and potential opportunities in the northern parts of the North Central Region, we need to find appropriate and productive varieties of these two crops.

Cowpea, an annual legume originally from Africa, has been demonstrated to be a useful forage and cover crop in the upper Midwest, and it was being bred for the seed production in the region at the University of Minnesota in the 1980s. A couple of those lines from Minnesota appear to have been maintained among the Seed Savers Exchange, and other early accessions of cowpea exist in the world collection at the USDA National Plant Germplasm System. If varieties can be found that both produce vigorous, sizable plants and dry seed within our short, northern growing seasons, then cowpea could be a popular cover and forage crop that is also a viable option for seed producers in the North Central Region, including organic seed producers. 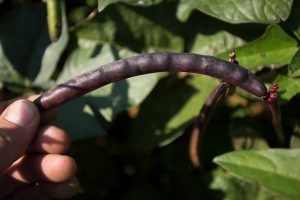 Cowpeas vary in color, maturity, plant form, and other traits like other pulse crops. Some look adaptable to the upper Midwest. Daikon or big-rooted radish is a biennial, and somewhat more complicated to work with than cowpea. It is well adapted to the western Cascades region where it can be planted, over-wintered in place, and then produce seeds. These large roots do not survive the winters of the North Central Region. However, radish is grown for seed on the northern plains when it is planted very early in the season to achieve the necessary level of vernalization so it will flower. Farmers would like radish cover crops that do not bolt and go to seed, so selection for improvement on the northern plains is a challenge. To best meet the needs, radish should be planted in August like farmers normally do, selection of rapidly growing roots of the sort most likely to benefit soil conditions should be carried out, these somewhat undersized roots need to be stored safely through the winter, and then these should be planted out the following spring to flower and form an improved generation of this population. Recurrent mass selection of this sort is expected to rapidly improve the population for cover crop purposes in the upper Midwest (selection and recombination in two summers).