Starting in 2011, the Merrimack County Conservation District(MCCD)has worked with state-wide entities and Dr. Bianca Moebius-Clune in developing innovative conservation plans for soil health. Several producers received soil health plans to improve soil health. Many of these plans suggested the use of mechanical aeration to reduce soil compaction, but access to a mechanical aerator to rent was limited to one in the Seacoast area and many agricultural producers did not have the necessary farm insurance to rent the equipment. Many of these producers also spread manure in the spring. The idea of using a mechanical aerator while spreading liquid or semi-solid manure is an idea that many producers would be interested in trying and possibly adopting for the future pending results. As part of a USDA Natural Resources Conservation Service Conservation Innovation Grant, MCCD will be purchasing a mechanical aerator to alleviate soil compaction and to improve injection of semi-solid and liquid manure. But, many farmers need assistance in properly using the equipment, education in soil health, soil compaction, and manure injection, and access to equipment that will allow for the equipment to use. This grant will assist in the labor portion of this project for on-the-field training on how to improve soil health, soil testing to compare pre- and post- aeration results, and education to interested farmers. Outreach will include workshops and one-on-one assistance with the equipment for best implementation.

In 2016, MCCD purchased a mechanical aerator, engaged with equipment dealer/ independent contractor L.A. Glines to teach farmers how to use the equipment on-the-field, conducted numerous soil tests on test fields, and conducted three trainings for people interested in using the equipment.  The four partner farms were aerated in 2016 along with four additional farms.  MCCD has a waiting list for the use of this equipment.  Additional outreach and aeration is planned for 2017. 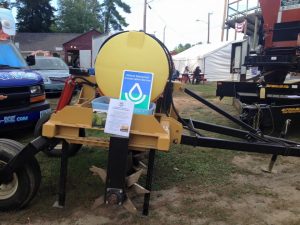 Below is a summary of our progress towards meeting our Objectives/ Performance Targets:

i. Purchase of mechanical aerator with the ability for manure injection.

ii. In order to get farmers interested in the project, outreach in the form of letters, press releases, and newsletter articles to NH agricultural producers with hay and pasture land.

iii. Identification of four agricultural producers to demonstrate manure injection using the mechanical aerator along with an assessment of their soil health pre- and post- treatment. This assessment will involve: 1. Cornell Soil Health Assessments and Penetrometer readings each year of the project that will assess the soil health conditions in pre and post treatment for each plot at each demonstration farm. 2. Assessments of the quantity and quality of forage from each plot for each year of the project.

iv. New Technology & Innovative Approach Fact Sheet with applicable NRCS practice standards that will be used for outreach events and available on the MCCD website.

vi. Program evaluation through surveys, interviews, and a review of the results with the team: initial farmers, NRCS, UNH Cooperative Extension, and MCCD.

The first impact that has been seen is an unexpected interest in the equipment.  MCCD has a waiting list of four farmers for the spring of 2017.  These farmers wanted to aerate in 2016, but MCCD chose to discontinue aeration during the drought as aeration did not appear to be effective during the height of the drought.  One of the farms that was aerated during the drought (Steve Cochrane) will be re-worked in 2017 as Mr. Glines stated the tines did not penetrate.  The four farms on our waiting list and the Cochrane farm will be the priorities of 2017.