There has been a marked increase in the use of cover crops in recent years. Farmers with a wide variety of cropping systems, and at a range of scales, are increasingly using cover crops in ways that enable them to achieve soil conservation goals while maintaining or improving crop yields. According to the 2012 Census of Agriculture, 5025 acres were planted to cover crops; according to NH NRCS, farmers took advantage of aerial cover crop seeding programs to sow cover crops on some 3500 acres of cropland in 2015, more than triple the acreage of the previous year. However, this is still only a fraction of the more than 15,000 acres devoted to the production of field crops and vegetables statewide. There are still many opportunities for farmers to make better use of cover crops to reduce soil erosion and conserve nutrients.

There can be significant hurdles to integrating cover crops into rotations. For example, some benefits of cover crops only become apparent after several seasons, when improved soil structure, reduced erosion, and conserved nutrients and organic matter results in better crop yields. Some producers perceive the cost of seed and labor for establishing cover crops to exceed the benefits, or that their use comes at the expense of crop yields. Even producers who are more motivated to experiment with and make greater use of cover crops face challenges. Farms select species from dozens of options and employ new or unfamiliar planting practices, and they may need equipment that isn’t easily available to them. Making the wrong choice with anything from selecting the wrong species to improperly terminating a stand may yield poor results and discourage further experimentation.

The overall goal for the New Hampshire Cover Crop Team’s activities is to encourage adoption through peer-to-peer interaction and support. We hope to continue the conversation that has begun about cover crops by highlighting examples where they have been used successfully. We will achieve this by providing opportunities for farmers to make direct observations in the field and to exchange dialogue with others who have found ways to make cover cropping work in this state.

We intend to recruit farms to partner with us for educational activities and on-farm demonstrations. While we are primarily looking to highlight farms that use innovative cover crop species or planting practices, we also want to include a variety of production systems, including both field crops and horticultural crops; both conventional and organic management systems.

Proposed project activities include the following:

The team has identified seven farms to host field days, forums, and/or videos, and is working to identify 2-3 additional farms.

We held a meeting in June at Adrien Lavoie’s farm in Hollis focusing on his use of cover crops and no-till in vegetable production.There were 40 people attending, including eight people from NRCS and Extension. 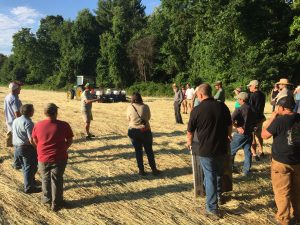 In November, we held a field meeting at Bohanan Farm, a dairy operation in Contoocook, to see results of plot demonstrating the use of a Penn State interseeder on field corn and to learn about the other ways the farm has been using cover crops. There were 26 participants, including six from NRCS and Conservation Districts. Participants saw the challenges involved with mid-season establishment of cover crops, and learned about methods for establishing them post-harvest 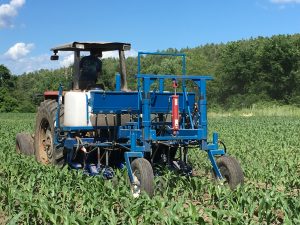 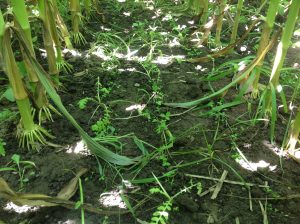 We held a cover crop tour of three dairy operations in Orford and N. Haverhill NH and Fairlee, VT that have experimented with cover crops, including use of a Penn State interseeder, living mulches, and a trial at the Grafton County Farm comparing mid-season and post-harvest establishment and different cover crop mixes. The event was a collaboration between members of the team with the Grafton County Conservation District, UVM Extension, and NH-NRCS. There were 34 participants, including 5 from NRCS 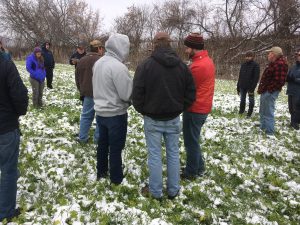