We hosted a field day at Mack Glass location in Marianna in October 2015 and had 45 participants. We also presented our results in the Perennial Peanut Field Day at the NFREC in Marianna in June 2015 and at the Beef and Forage Field Day at NFREC in April 2016. In addition, we strip-planted perennial peanut at the Silver Spurs Ranch, Kenansville, FL, owned by the Florida Cattlemen Association. Our results indicated that Ecoturf planted on prepared seedbed established faster and presented better results than Florigraze. Strip-planting perennial peanut allows reduction of N fertilization because of biological N2-fixation. Several extension publications were released in outlets such as Florida Cattlemen Magazine, Panhandle Ag e-news, Hay and Forage Growers, and SE Cattle Advisor, demonstrating the benefits of strip-planting perennial peanut. Recently our group was granted a USDA award and we are assessing the strip-planted perennial peanut on a grazing trial in Marianna, FL. The SARE grant allowed our group to demonstrate the technique for producers. Although the grant finished, we are still planning to have a field day at the southernmost location in Wauchula, FL. 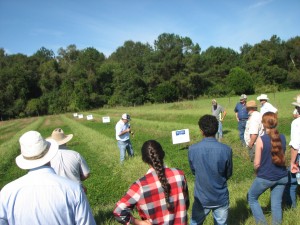 Nitrogen (N) is one of the most important inputs in agricultural production systems. It is an essential element required for plant and animal growth and it is usually limiting due to low soil organic matter, particularly in sandy soils like those found throughout Florida and the Gulf Coast Region. Nitrogen is abundant in the atmosphere, but it must be reduced to be plant available. The process of industrial N reduction to produce fertilizer requires fossil fuel energy. In addition, N fertilizer application increases emissions of N2O and NO, two important greenhouse gases (Bouwman et al., 2002). As a result, N fertilizers have one of the largest carbon footprints of all farm inputs. Lal (2004) indicated that carbon emissions due to production, transportation, storage, and distribution of N fertilizer range from 3.3-6.6 kg CO2 equivalent per kg N. Current N fertilizer use in Florida forage production ranges from 60 to 150 kg N per ha annually depending on the intensification of the system. This accounts for the emission of 198-990 kg CO2 equivalent per ha from the N fertilizer alone. In addition, if not adequately managed, N fertilizers may contaminate the ground water when applied to soils prone to leaching, like those present in Florida. Lastly, prices of N fertilizer have increased dramatically in recent years, and this trend is expected to continue.

Within this context of growing challenges and problems associated with the use of N fertilizer, warm-season perennial grass pastures receiving N fertilizer remain the foundation of the cow-calf system in the Southeast USA. As N costs rise, producers face an increasingly grim outlook in which economic realities limit or preclude use of N fertilizer. Because grass pastures are nearly always N limited, this results in lower forage production and in some cases degradation of the grassland resource. Degraded grasslands provide inadequate feed for livestock and reduced economic return and ecosystem services. With 32% of regional land area in pasture and a 12.8 million beef cow census, achieving sustainable grassland agroecosystems is of great significance for the Southeast USA.

Rhizoma peanut (Arachis glabrata Benth.) is a long-lived perennial legume that has potential to associate with warm-season perennial grasses in SE USA. Rhizoma peanut establishment, however, is expensive. This has limited its use for grazing by the large beef cattle herd in the region. Because it can spread in bahiagrass and bermudagrass pastures and has been shown to live for more than 30 years, overcoming the barrier of establishment cost is critical to development of sustainable pasture systems that do not require N fertilizer. Thus, there is a current need to evaluate technologies that: i) reduce the cost of rhizoma peanut establishment; ii) minimize the period of time during establishment that land is taken out of the grazing program, and iii) result in low-input and sustainable grazing systems for beef cattle in the region. Developing on-farm technology that addresses these aspects will facilitate rhizoma peanut establishment by producers, accelerate technology transfer, and increase sustainability of grazing systems in SE USA.

Nitrogen fertilizer use may be reduced if it can be replaced by N-fixing legumes. These plants are able to fix N2 from the atmosphere through a symbiosis with microorganisms. This biological N fixation (BNF) may increase sustainability of grazing systems by reducing production costs, reducing carbon footprint from farming operations, and reducing the risk of ground water contamination. Among different legume options, rhizoma peanut is one of the best for the southern Gulf Coast region. It is a perennial legume that persists well under grazing and it is also well suited for use as a hay crop. Establishment of rhizoma peanut, however, is slow and expensive, and as a result the crop has been used almost exclusively as high value hay for equine or dairy systems. Greater use in grazed pastures for beef cattle is needed in order to address the N limitations of these systems without relying on fertilizer N. Recent research findings of our team (Castillo et al., 2013a and 2013b) suggest that strip-planting rhizoma peanut in existing perennial warm-season grass pasture is a viable option to reduce establishment cost. These studies also identified the importance of weed control and defoliation management in order to enhance establishment. It was determined that producers would be able to utilize the area for hay harvest during the establishment year, with grazing occurring in subsequent years. These results have been demonstrated and discussed at producer field days in 2012 and 2013. Interaction with producers in these settings and on their farms has revealed that they are interested in adopting this approach to rhizoma peanut establishment and fine-tuning it on their farms.

Our general objective was to find fast and cost-effective ways to establish rhizoma peanut onto existing bahiagrass pastures, reducing the use of synthetic N fertilizer and improving overall forage quality. We tried different approaches. The strip-planting reduces establishment cost because of reduced planted area. Prepared seedbed was the best establishment and Ecoturf the best variety, in all locations. Our target audience are beef producers who have their livestock operation based on pastures, which are the majority of Florida livestock producers. We had one on-farm field day, two field days at the Research Station (NFREC in Marianna), and we also strip-planted perennial peanut at the Silver Spurs Ranch, owned by the Florida Cattlemen Association, where we also hosted a field day in Nov. 2015. Educational materials were prepared and released in different outlets, helping us to get to our target audience.