Rangeland Restoration on the Channel Scablands of Eastern Washington

The invasion of Medusahead rye into the Channeled Scablands of eastern Washington has significantly reduced forage options for livestock producers over the last 25 years resulting in a decline of forage quality, reduced cattle numbers and increased risk from grazing poisonous plants such as lupine, fiddleneck and hairy vetch.  Research over the last 3 years, funded primarily by this grant (Project OW 13-005) has resulted in the identification of improved grasses (selected perennial species) and forbs (forage kochia species) that established and have persisted over the short-term in this harsh arid ecosystem.  Furthermore, we determined that where these improved grasses and forbs established, medusahead has not reinvaded.  The most successful grass species to establish included Hycrest II, Vavilov II, Sherman Big Bluegrass and to a lesser extent Western wheatgrass and Thickspike wheatgrass.  We have also had excellent success establishing 2 varieties of forage kochia within the grass species mix (i.e., a low growing variety called Immigrant and a taller variety called Snowstorm).  The replicated plots that were established the first year followed by demonstration plots established the 2nd and 3rd years have provided a working model to demonstrate the potential to “push back” the rapid and aggressive invasion of medusahead into this region.  Stake holders are enthusiastic and very receptive to the work that has been done.  Subsequently, working with private ranchers, we have now established nearly 500 acres using the grass and forb mix we have identified from the first and second years of research.   Also, with the help and suggestions of local ranchers we have now developed a method which is practical and economical to expand this research to a ranch scale by utilizing the cattle to clear the land of the medusahead and it’s thatch through targeted grazing.  This targeted grazing provides a sustainable seed bed preparation that requires only minimal disturbance to allow planting the improved grasses and forbs.  Furthermore, this method allows the producer to fully utilize forage from the range land the year of the seeding. Following one year of rest, for seedling establishment, producers can subsequently utilize the newly seeded pasture the fall of the second year.  This research has clearly demonstrated the success of improved grass species and forbs to compete with medusahead invasion.  This is the 3rd annual report of this 3 year project and much more research is needed to further understand the ecology of these invasive species, develop additional tools to combat their aggressive nature, and ultimately improve the overall health of the ecosystem.

Objectives for Year three were completed.

The results from years 1, 2 and 3 have been evaluated and published, and the data clearly demonstrated that improved perennial grasses and forage kochia varieties can be established on the harsh rangelands of the Channel Scablands of eastern Washington.  This research also suggests that  establishment of improved grasses mixed with forage kochia  reduces medusahead reinvasion over the shorterm (Figure 1). 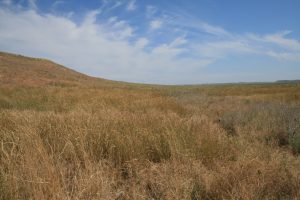 Figure 1.  Replicated plots on the Spencer Ranch.  The photo at the left shows the successful establishment of the perennial grasses with a clear view of the hairy vetch in the back ground.  The photo on the right shows the same plot later in the season and clearly demonstrates a good stand of perennial grasses with the weeds at the border of the plots (upper right quadrant of the photo).

Table 1 was included in the 2015 annual report and has subsequently been published.  This table demonstrates the germination success and establishment of the grasses during years 1-3 of the study.  Based on the first two years of data collection, the best performing grasses were Hycrest II, Vavilov II and Sherman Big Bluegrass (Figures 2, 3).  Over 90% of the native mix germination the first 2 years was represented by Sherman Big Bluegrass (Figure 2).  The germination rates of the other species in the native mix and Bozoisky were poor. The lack of establishment of Bozoisky allowed medusahead to quickly re-established dominance in those plots.    Because of herbicide residue the forage kochia failed to germinate and establish in the replicated plots, however there was excellent germination and establishment in the larger demonstration plots.  That data will be evaluated and published in the next year.  Based on Table 1 and Figures 3 and 4, one can see that the lack of re-invasion of the weeds is strongly correlated with the positive response in the grass plots. 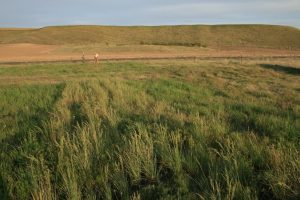 Figure 3:  Frequency of seeded grasses the first three years after seeding.  Note the failure of the Bozoisky II plots and rapid re-invasion of annual grasses (weeds) represented in this figure, table 2 and figure 4.

Figure 4:  Frequency of weeds within plots for year 1 and Year 3.  Bars not labeled with the same letter differ (P < 0.05).  Notice the weeds in year 3 of the failed Bozoisky II plot compared with the other grasses and control plot.

Table 1. Percent frequency of establishment and persistence of plant materials, seeded grass entries and weeds (± SE), throughout the study with contrast (P-value) of grass entries.

Table 2 demonstrates the biomass production of each of the replicated plots.  Hycrest II, Vavilov II and the native mix clearly out-performed the Bosoisky II plots. Vavilov II was the best performing improved perennial variety.  In the native mix, Sherman Big Bluegrass was the only native variety that successfully established and the positive response is clearly demonstrated.

As discussed in annual report #2, the forage Kochia response was negative in the replicated plots.  We believe this poor response was from residual herbicide in the soils incident to the preparation phase of the project, therefore evaluation of forage kochia in replicated plots was not done.   The forage kochia response has been excellent in the larger demonstration plots where no herbicides were used and will be included in data analysis in subsequent years (Figure  5).

All milestones and objectives for the first three years have been accomplished except preparing information for social media and information bulletins and newsletter (these are in progress).  Germination and establishment data shown in Table 1 and Figure 3 followed by the biomass data in Table 2 clearly demonstrates, for the short term, the potential to improve rangeland conditions and reduce medusahead reinvasion in this harsh ecosystem known as the Channel Scablands.  However, much more research and long term evaluation will be required to determine the long term success of these improved grasses to persist under grazing pressure in this environment and at the same time prevent re-invasion of the annual grasses.   Grazing of the replicated plots and large demonstration plots was allowed last fall and further evaluation will continue in the summer of 2017.

Medusahead invasion on the Channel Scablands over the last 25 years has reached a critical point.  During the first half of the last 50 years cheatgrass was the predominant invasive weed.  With grazing pressure on the cheatgrass and frequent fires, medusahead has rapidly replaced cheatgrass as the predominant invasive weed with an explosive increase over the last 25 years.  Rangeland production and quality have now declined and is rapidly reaching a tipping point for profitable and sustainable cattle production.  As was mentioned in the 2015 report, one rancher provided us with data that showed his stocking rate throughout his ranch had dropped by more than 50% since 1990 and he attributes that totally to the invasion of medusahead.   With the rapid degradation of rangelands in this region and as medusahead continues to spread, other negative impacts such as reduced habitat for wildlife, small mammals and birds, loss of important pollinators and increased wildfire cycles have been exacerbated.

While it is difficult to make any prediction or determine the long term impact of these seeding trials after only three years of information, the early data is very promising.  The reduction in the re-invasion of medusahead into the successful plots (Figure 1) demonstrates the potential to turn back this invading annual grass and utilize new and improved perennial grasses and forage kochia to improve rangeland conditions.  Furthermore, the biomass data (Table 2) and feed value of the forage kochia (10-12% protein) has the potential to provide a winter forage source and also to provide an alternative protein source when grasses have matured and lost relative feed value.  The strong stakeholder support in this region (Figure 6) is indicative of the scope of the problem and the level of interest created by this research.  The demonstration plots (Figures 5 and 6) are of particular interest to the stakeholders and were established with this purpose in mind.  This allows producers and land managers to observe on a larger scale the economic feasibility and potential for rangeland improvement.  These larger plots are also intended to provide the research information and technology transfer to transition from the published research provided by the replicated plots to the ranch scale applications and improvements.  Also, with the help and suggestions of local ranchers we have now developed a method which is practical and economical to expand this research to a ranch scale by utilizing cattle to clear the land of medusahead and it’s thatch through targeted grazing.  This targeted grazing provides  reasonable seed bed preparation that requires only minimal disturbance to allow planting the improved grasses and forbs (Figure 7).  Furthermore, this method allows the producer to fully utilize the range land the year of the seeding and following one year of rest for seedling establishment then subsequently utilize the newly seeded pasture the fall of the second year. 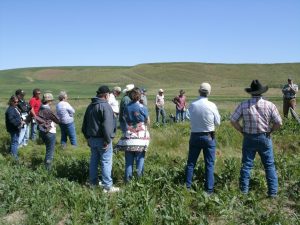 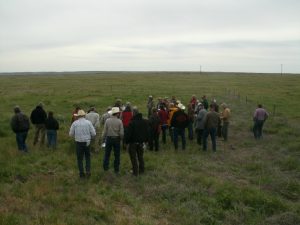 Figure 6.  Field day held May of 2015 for stakeholders .  Left Photo:  Dr. Kevin Jensen discusses the design of the plots and explains how the plots were prepared and seeded.  Right Photo:  Ranchers and producers look at the plots and interact with  scientists. 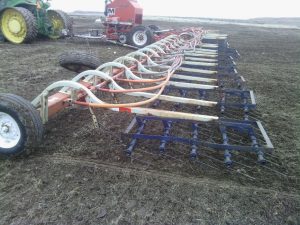