We are developing new metrics for describing terrain use of cattle grazing mountainous rangeland.  The terrain use indices we developed and used in our previous study (SARE SW09-54) may not be effective metrics for calculating breeding values to use in genetic selection, because they are trait ratios. Genetic progress from selection based on trait ratios is unreliable due to unequal selection pressure on the numerator versus denominator of the ratio.  Using recommendations and data from the literature, we developed new indices that are based on the extent of terrain use that cattle are expected to utilize.  The new expected terrain use metrics were moderately to highly correlated to previous ratio-based indices using tracking data from three ranches. These newly developed indices can provide direct numeric estimates of terrain use and appear effective in identifying animals that prefer rugged terrain (hill climbers) or gentle terrain near water (bottom dwellers).  The expected terrain use indices appeared to be superior metrics relative to ratios for development of breeding values to select beef cows for grazing distribution in mountainous rangelands.  The potential of thee expected terrain use indices were discussed at the Society for Range Management meeting in February 2016 and will be discussed again at the International Rangeland Congress in July 2016.

A1. Track at least 200 cows with GPS collars for at least 2 months at 7 or more mountainous ranches in New Mexico, Arizona, Colorado, and Nevada.

B1. Analyze genetic markers used in a small prototype (180 SNP) panel with cows tracked in this project and compare associations to previously studied cattle herds.

B2. Add or replace genetic markers in the prototype SNP panel so that the most predictive SNP are used in final DNA test.

C3. Develop web-based software so producers can easily obtain the MBV for grazing distribution for each animal.

D.  Provide training to ranchers and seedstock producers specifically designed to increase their knowledge and ability to utilize MBV to select cattle for improved grazing distribution.

D1. Show ranchers how to collect DNA samples from cattle and how to submit the samples for analysis.

D2. Teach ranchers how to obtain MBV from web-based systems for their cattle and utilize this information to select for improved grazing distribution.

D3. Show how ranchers can incorporate grazing distribution goals and objectives into their ranch-specific breeding program.

E.  Estimate the potential for improvement of grazing distribution through MBV and genetic selection.

E1. Estimate the potential for improvement in grazing distribution through genetic selection under varying scenarios.

E2. Deliver this information to ranchers and land managers via multiple kinds of extension programs so they will know the potential for improving on-the-ground grazing use.

We have completed cattle tracking and DNA sample collection at the Wilbanks Ranch in Mayhill, NM.  We successfully tracked 20 cows for at least 3 months (late June through September 2015).  We also tracked 20 cows at the Heartstone Angus Ranch (Dick and Erin Evans) in Silver City, NM during the fall of 2015.  Unfortunately there was a problem with the GPS collars, and positions were not collected frequently enough to be used in this study.  We will track at least 20 cows again at Heartstone Angus Ranch during the fall of 2016.  From March 2016 to July 2016, 21 cows are being tracked at the Gund Ranch in central Nevada.  During June to October 2016, 27 cows are being tracked at the Ensz Ranch in southcentral Colorado.  We are on schedule for collecting tracking data and cattle DNA samples. 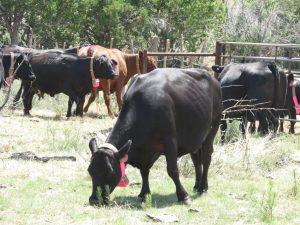 Cows being tracked at the Willbanks Ranch near Mayhill, NM.

Although the associations of genetic markers and terrain use indices identified from our previous study (SARE SW09-54) are exciting, the terrain use indices we developed and used may not be effective metrics for calculating breeding values to use for genetic selection because they are trait ratios. Expected progeny differences (EPD) are a common tool used to compare bulls during selection.  Genetic progress from selection for EPD computed from trait ratios is unreliable due to unequal selection pressure on the numerator versus denominator of the ratio. Using tracking data from three ranches in ourprevious study (SARE SW09-54), we are developing new terrain use indices to use for developing molecular breeding values for grazing distribution.  We calculated equations predicting the time cattle would spend at varying horizontal distances from water and on variable slopes based on commonly recommendations from the literature (Holechek 1988). We used a 9800 acre pasture containing rolling terrain at the College Ranch (Las Cruces, NM), an 830 acre mountain pasture at the Thackeray Ranch (Havre, MT) and a 22,400 acre pasture containing both gentle and mountainous terrain at the Todd Ranch (Willcox, AZ).  Sixteen to 19 cows were tracked at each ranch. Relationships of the rolling and rough terrain use indices developed in the SARE SW09-64 study were compared to the new expected terrain use metrics using Pearson correlation coefficients and tracking data from the three ranches. The rolling index was based on slope use and horizontal and vertical distance to water, while the rough index was based on slope and vertical distance to water.

The terrain use indices showed that some cows spent less than 5% of their time in areas they were not expected to use (bottom dweller cows) while others spent as much as 50% of their time in areas they were not expected to use (hill climbers cows). Differences among cows were more pronounced at ranches with more mountainous terrain (Thackeray and Todd Ranches). The rolling and rough terrain indices used in our previous study (SARE SW09-054) assumed that the effects of slope and horizontal and vertical distance to water were roughly equivalent, but the new expected use indices do not account for horizontal distance to water in smaller pastures where cattle cannot travel more than 1600 m from water or in situations where water is more abundant. The horizontal distance to water adjustment was developed for extensive arid and semi-arid pastures with relatively gentle terrain and require additional research to refine for mountainous pastures.

These developed indices can provide direct numeric estimates of terrain use and appear effective in identifying animals that prefer rugged terrain (hill climbers) or gentle terrain near water (bottom dwellers).  The expected terrain use indices appeared to be superior metrics relative to ratios for development of breeding values to select beef cows for grazing distribution in mountainous rangelands.

We presented a paper at the 2016 Society for Range Management Annual Meeting in Corpus Christi, TX in February 2016 describing the development of the expected terrain use equations discussed above.  We also submitted a proceeding paper to the 2016 International Rangeland Congress (IRC) describing further developments and evaluations of the expected terrain use indices.  The paper will be presented 2016 IRC meeting in Saskatoon, Saskatchewan, Canada in July 2016.

We are currently in the data collection portion of the study.  So it is too early to determine if we will be able to validate the effectiveness of the previously identified genetic marker as selection criteria for grazing distribution.  Our development of metrics based on expected terrain use may be an integral part of future molecular breeding values for cattle grazing distribution.  We have presented our new terrain use metric to scientists, land managers and ranchers at the Society for Range Management annual meeting in February 2016.  Approximately 40 people attended the presentation.  There was significant interest in our approach and overall goals of this study.  Updated analyses of the terrain metrics will be presented at the International Rangeland Congress in July 2016.