Building Community and Growing Food with the Next Generation

Douglas Park Community Garden.  In the Fall of 2014, Traci Barkley of Sola Gratia Farm started working with the students in the Champaign Park District afterschool program at the Douglas Park Community Center towards developing a community vegetable garden. Between 20-25 students aged K-5 participated in discussions, lessons and activities regarding basic vegetable identification, how vegetables grow, what parts of the plant we eat, the importance of bees and pollination, basic of healthy eating, vegetable preparation and cooking, basics of soil health and how to amend, tools needed in vegetable gardening, cultivation techniques and more.  By late Winter of 2015, vegetables to grow in the garden were chosen, seeds were secured, an interactive felt map of the proposed garden was developed, the beds were measured, and sod was removed.  The beds were tilled in early April and Douglas Park Community Garden was born!  Two field trips out to Sola Gratia Farm allowed kids to mix soil, plant seeds, see their “parent” farm and see the tractor that tilled their own garden.  Seeds planted at Sola Gratia’s greenhouse were cared for by farm staff until ready for transplanting while seeds planted directly in the garden bed were watered and weeded by the kids.  By the time school let out in early June, the following vegetables were growing in the garden: red potatoes, yukon potatoes, sweet potatoes, red and yellow onions, carrots, three kinds of kale, red and green cabbage, chinese cabbage, broccoli, two kinds of kohlrabi, swiss chard, four kinds of peppers, six kinds of tomatoes, two kinds of eggplant, summer squash, zucchini, cucumbers, two kinds of head lettuce, and sweet corn.

Over the summer, 10-12 girls aged 8-12 and enrolled in a summer day camp program for girls in science took over as caretakers for the garden.  The camp ran for several weeks and part of every day was spent in the garden. The girls weeded, watered, planted additional vegetable successions, kept journals, ran various experiments, harvested veggies and coordinated donations of vegetables to the local men’s homeless shelter.

When school started this past September, several students from Year 1 of the garden remained in the afterschool program, though several new students are now part of the effort.  We finished this year’s harvest, including bushels and bushels of carrots, potatoes and sweet potatoes and have now covered the beds with straw to rest for the winter.  Vegetables harvested throughout the season were either prepared and eaten by kids onsite, sent home for their families to enjoy or donated to our local men’s homeless shelter.

Indoor programming for the late Fall/Winter/early Spring started with using our harvested sweet potatoes to make sweet potato pies!  We have also been talking about why we covered the garden with mulch, basic soil biology, and what happens underground in the wintertime.  Early in 2016, we will make garden journals, start selecting our seed, and start the whole process over again.

Plenty has been learned from this past year’s efforts on this project including optimal timing and content of weekly programming and how best to engage kids in various activities.  This group of kids largely went from disinterest, fear of getting dirty and general squirreliness to taking ownership in the garden, asking deeper and deeper questions about growing food and great enthusiasm for every task from planting, weeding, harvesting, mulching, trellising and especially watering.  What we feel most proud of was that their concern for having their very public garden “messed with” or “stolen from” turned to a desire to give the produce away to those that need it most or to take home to their families with a genuine sense of pride.

After being nominated by the Champaign Park District, Sola Gratia Farm was recently awarded “Best of the Best” Small Business by the Illinois Association of Park Districts for its partnership in this program.

“Beginning Farmers” Day Camp.  In early July and in partnership with the Champaign County Farm Bureau, we hosted 140 students from the Champaign Park District-Leonard Center on one day and the next week, we hosted another 60 kids from the CPD-Douglas Community Center. Two of the three groups (6 to 11 years old) went through our day camp stations at the farm where they were introduced to the basics of growing and harvesting good veggies, the value of bees and healthy eating. Farmer Clay took the kids on a field tour and introduced them to the concept of “roots, fruits and shoots” and helped them identify which part we are eating and how the complete plant looks when growing. Traci Barkley got their blood pumping with food group relays after talking about food as fuel and what kids need to eat to keep up with their summer joys of swimming, biking, basketball, etc. We also talked about “superfoods” and the benefits of carrots, broccoli, tomatoes, spinach, etc. and created our own “superfood superheroes” (ala Popeye) with modeling clay and markers. At the bee station, the kids learned about bees and their unique community roles and their importance to fruit and vegetable production. Another two leaders had the kids running relays, picking up “pollen” from flowers and delivering to the hive. Our resident beekeeper, Maggie, taught the kids about hive recognition and worked with the kids to paint bee boxes. Both weeks, the kids decorated our parking lot with chalk drawings of bees and flowers.  Finally, the kids took a cooking class with Chef Colleen where they learned about setting your “mise en place”, food preparation and the basics of cooking! They made tasty squash and zucchini tacos with produce from the farm. One group of kids, the 10-13 year olds, didn’t get a chance to have their camp session with us at the farm due to the storms that rolled in last week. Instead, we brought them inside for a cooking class with Chef Colleen and to view the documentary “A Place at the Table”. We weren’t sure how this group would receive the very difficult content of the film, but the room was silent…and they were not sleeping. The film is an examination of the issue of hunger in America and chronicles the struggle of three individuals from different parts of the US in finding adequate nutrition. We had a very full discussion after the film about what hunger looks like and how people find themselves in need, how to ask for help and who can help, and what each of us can do to be part of the solution. Camp always takes a lot out of our staff and volunteers as we are doing this in the busiest part of the season with already over-full days (and this year, extreme weather!) But working with the kids during these camp sessions serves to ground us and remind us why we are doing what we are doing in the first place. Here’s hoping a few will plant a garden, start experimenting in the kitchen, ask their parents to buy a few more healthy foods at the store and stop swatting at bees and instead take a moment to watch and wonder.

The membership of Sola Gratia Farm follows our farming and outreach activities through our newsletter produced weekly during the CSA season and monthly through the off-season. Progress on the Douglas Community Garden project, summer camp and other youth-oriented outreach and education activities were written up in the newsletter and reproduced on our website in blog form. Both of these activities were highlighted in numerous social media posts and were covered in an article in our local newspaper. We spoke to the Champaign Park District Board at public meetings several times and were publicly honored at Illinois Association of Park District’s Annual Dinner with the “Best of the Best” Small Business Award for partnership in this program.  Public presentations about our farm, including our youth education and outreach have been shared with several local service organizations and clubs including Rotary, University Extension, Faith in Place, Champaign County Farm Bureau, Altrusa and The Executive Club as well as at the annual Illinois Specialty Crops Conference. We also participated in the Grand Re-Opening of Douglas Park (post-major renovation) with a special public spotlight on the start of the Douglas Park Community Garden.

In Year 2 of this grant cycle, we intend to: 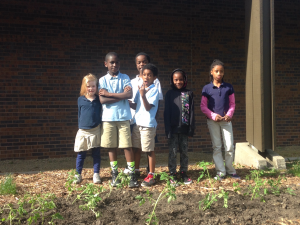 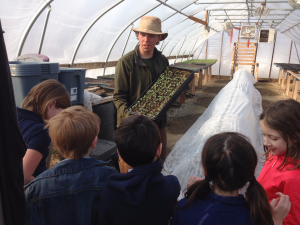 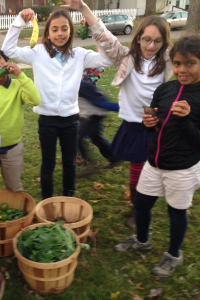 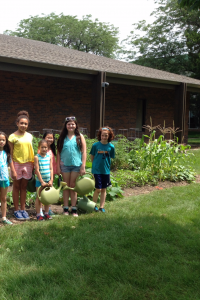 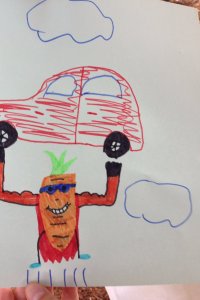 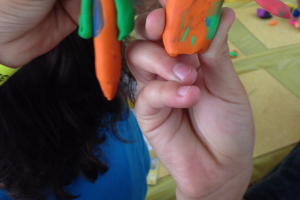