“Bochasi” or fermented compost is a valuable soil amendment according to a review of literature and social media, as well as small scale production we conducted in 2013.  However, we need to finalize a “recipe” using raw materials-leaves, digester solids, and/or kitchen scraps, and test the impact on vegetable yields.

It appears the leaf compost offered the best potential for effect at the lowest rate with the most volume of material locally available.  Leaf compost recipe was chose for year 2016 trial.

A slight yield advantage was found with bochasi on radish total yield, but more testing needs to be done.  Especially given that test plots had very high fertility as noted in results section.  A poorer soil may show yield benefit more significantly.

Currently, we use leaves that have been cold composted for 4 years as our main soil improvement amendment.  However, this requires a long wait time, heavy equipment and significant land to produce enough material.  We are machine and land limited on our farm.  Bochasi, may offer a more time efficient and scale appropriate way to boost soil health and crop yield, especially in our hoophouse production which is highly valuable and intensively cropped.

To determine the effect of BC on the yields of vegetable production, a randomized complete block design will be used as advised by Dr. Hoagland.  Treatment and control.  BC will be applied to 15 bed feet for the summer and fall plantings in block design.  Annual soil testing is done already and that information will be used as part of this project.

A basic compost analysis (C6 – OM,Carbon, C:N, pH, Salts,S,Ca,Mg,Na,Fe, Al, Mn,Cu,Zn, NH4) will be run on all three batches to compare and a (C10w/o) will be run from A and L Labs on the final chosen BC recipe and product.  Dr. Lori Hoagland at Purdue University will provide consulting and additional analysis of the three batches of BC product including  nitrogen, total C and N, labile soil organic matter pools, microbial activity, pathogen bioassays, and culture and culture independent analyses of microbes.  In year two, of the first three batches, we will produce the one highest quality BC and test impact on yield on vegetable crop that would benefit most based on BC analysis, soil test results, and yield goals.

To determine the effect of BC on the yields of vegetable production, a randomized complete block design will be used as advised by Dr. Hoagland.  Treatment and control.  BC will be applied to 15 bed feet for the summer and fall plantings in block design.  Annual soil testing is done already and that information will be used as part of this project.

Feb-March: Joan and Dan Perkins, along with Dr. Hoagland and students will review literature for known BC recipes:

April-May: gather materials to make BC according to budget.

BC was applied in the Fall of 2015 to two 25 bed foot sections.   Pink Beauty Radish was then seeded in three rows to determine effect on total yield.  A slight increase in total wt and marketable wt was noted over controls, but was not statistically significant. 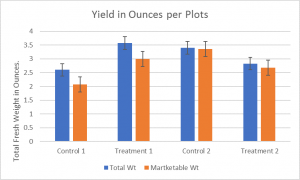 It should be noted that the soil on which this trial was conducted was in excellent health.  8.4 organic matter, CEC of 14 and balance minerals/nutrients.   We expected that on a lesser soil better results maybe achieved.   More testing needed.  It could also vary by crop used.

Presented results to one on farm tour.

PDF Results will be shared once final report is approved SARE via Perkins' Good Earth Farm Website and on Facebook groups- Four Season Farming and Winter Production and among a regional growers group in NW Indiana.

Attached is pdf of picture summary and results that will be utilized.

We will be running another batch in 2017 to test additional crops and in poorer soils on the farm.

It appears too much of bochasi may have a negative effect.  How much is too much and why?