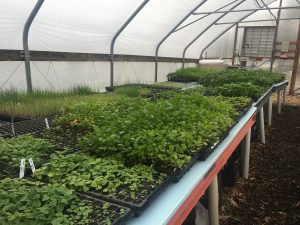 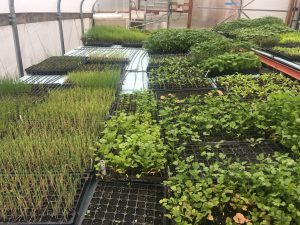 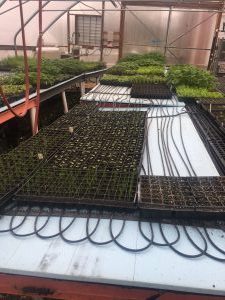 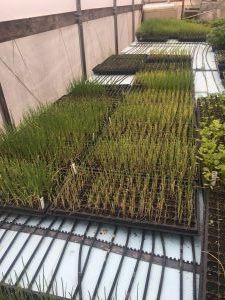 Since 2009, EarthDance has operated a (now certified) organic farm and educational programs on the site of Missouri’s oldest organic farm, in Ferguson, a suburb of St. Louis.  We currently grow 156 different varieties of crops on 2.3 acres of a 14-acre farm.

EarthDance’s founder, Molly Rockamann, is a graduate of the UC-Santa Cruz Agroecology Program, where she studied practices of organic crop production, soil stewardship, and pest/ disease management.  In 2008, Rockamann partnered with a local land trust, The Open Space Council, to found EarthDance.  EarthDance is a nonprofit organization dedicated to preserving farmland and educating community members about organic agriculture.   The organization’s flagship program, a part-time farming apprenticeship, was created to train more growers for the St. Louis region.  Since 2009, over 230 individuals have participated in the training program; according to a 2014 alumni survey, 75% of graduates go on to work or volunteer in sustainable agriculture.

In 2012, EarthDance purchased the 14 acre peri-urban farm where our programming takes place.  EarthDance has expanded its programming to include workshops, classes, free farm tours, volunteer opportunities, and youth programs.  EarthDance’s produce is enjoyed by 60 CSA members, shoppers at farmers markets, patrons at several local restaurants, and recipients of food donations

EarthDance operates on a farm that has been in organic production since 1883. Since its inception in 2009, EarthDance’s organic practices have included cover cropping, crop rotation, IPM, and fertility management through manure and fish emulsion. Recently, EarthDance has begun to explore “beyond organic” practices such as integrating pastured poultry onto our production fields for fertility and pest control; using earth works (berms and swales) to hold water on our landscape; and planting native flowers to attract pollinators and beneficial insects.

EarthDance proposed to install benchtop heating to reduce our greenhouse’s carbon footprint, and the cost of heating it. A benchtop heating system works by circulating hot water on benches under seedling trays, keeping the seedlings’ growing medium at an ideal soil temperature for germination. Low tunnels over the seedlings keep the ambient temperature immediately surrounding the seedlings temperate, while the air above the seedlings may drop to near freezing. It is more efficient to heat soil than to heat an entire greenhouse structure. We anticipated that using the system would result in energy and cost savings.

EarthDance's benchtop heating system works by pumping water through a condensing boiler, out through transport tubes to the two zones.  Each zone has a manifold, in which the hot water is distributed into many microtubes, which are evenly spaced across the depth of the bench.  The microtubes run over the surface of the bench and back into a return manifold.  The return water is pumped back into the boiler to be reheated.  The heat in each zone can be controlled through separate thermostats, allowing us to set different soil temperatures for different crop needs or to only turn on the zone that we need at the beginning or end of the season.

We planned to establish a baseline of energy usage and costs during our first winter by heating the greenhouse with propane and install the benchtop heating system in summer of 2015 to reduce our dependence on non-renewable energy. However, installation of electricity in the greenhouse was delayed and did not occur during winter of 2015. EarthDance's seedlings were grown in another location, La Vista Farm's greenhouse. La Vista's greenhouse was a similar structure to EarthDance's, a high tunnel measuring 30x96. The farmers at La Vista said that they utilized 320 gallons of propane in the winter/spring of 2015 while keeping their temperature set at 55F at night, with no bench-top heating system.

The staff at Gateway Greening, a community gardening organization, contacted EarthDance, offering to sell us their benchtop heating system that they had discontinued the use of after they decided to outsource their seedling production. They helped EarthDance dismantle the system so that EarthDance farmers would understand how to reassemble it. Cary Aye, an EarthDance volunteer, who has since joined our staff, installed the water heater that runs the system.

EarthDance's propane usage in 2016 did not indicate savings over the baseline established by La Vista in 2015. EarthDance recorded usage of 340 gallons in January-April of 2016. We believe that this was higher than needed due to farm manager error when programming the heating system, and that night-time temperatures were kept higher than needed (60 degrees instead of 45) resulting in greater than necessary fuel usage.

In 2017 our propane usage (214 gallons thus far) has been down thus far from 2016 levels, but it has been an unusually mild winter. During the day, the propane was rarely used since ambient temperatures were often above 45 degrees. Thus, the benchtop heating system wasn’t a significant factor in lowering energy consumption. In January of 2017, EarthDance's Farm Managers assessed the system for problems and potential solutions to increase its effectiveness. The water pressure had dropped and the system had some leaks that needed to be patched. During the course of this work, Farm Manager Matt Lebon decided to add a layer of insulation (repurposed, flat 1-inch thick styrofoam boards) under the heating tubes. We anticipate that inclusion of the insulation could increase the effectiveness of the system.

We have observed increased seed germination or increased seedling vigor since making this change; a seedling tray that was half on the coils and half off had noticeable differences in the robustness of the seedlings receiving the additional heat from below.

At this date, EarthDance's Farm Manager, Matt Lebon, is less enthusiastic about recommending the benchtop system than we anticipated at the commencement of the project. His assessment is that for its potential benefits, the cost to small-scale organic farmers to install a similar system at full price would not be worth the expense. He sees the system as too "gadgety:" too susceptible to malfunctions. He is interested in the potential of earth-sheltered greenhouses to enable farmers to create climate-controlled growing spaces for winter and vastly reduce dependence on fossil fuel.

I have completed the Benefits and Impacts form. EarthDance has not yet collected enough data to be confident about the economic or environmental value of the benchtop heating system. As discussed above our project implementation included an imperfect benchmark measurement, and multiple factors including user error and a mild winter have influenced our propane usage during the project period. We would like the opportunity to provide an update to this report after another two years of propane usage monitoring, which we could compare to systems that do not utilize benchtop heating.

In 2016, EarthDance’s 28 apprentices were trained in greenhouse management practices, including use and set-up of the benchtop heating system.

In April of 2016, EarthDance published this blog entry about the project and shared the story in our e-newsletter. http://earthdancefarms.org/2016/04/greening-the-greenhouse-update/

In February 2017, EarthDance hosted a field day to share information about the benchtop heating project and other systems.  The field day was marketed to other programs that target beginning farmers: Food Works of Southern Illinois' Farm Beginnings program, and the Grow Your Farm program out of University of Missouri. Both groups agreed to participate in the field day.  However, the  Grow Your Farm group opted instead to visit another farm closer to their meeting site in Hillsboro, MO.  Ten farmers from the Farm Beginnings program RSVPd to attend the tour, and six actually did.

Five of these attendees completed a tour evaluation form.  The results included the following takeaways:

General Assessment: 5 out of 5 found the tour to be excellent

Aspects of the tour people found most interesting:

EarthDance proposes to install benchtop heating to reduce our greenhouse’s carbon footprint, and the cost of heating it.  We will establish a baseline of energy usage and costs during our first winter by heating the greenhouse with propane. During the spring and summer of 2015, EarthDance will install a benchtop heating system, in order to greatly reduce our dependence on non-renewable energy.  A benchtop heating system works by circulating hot water on benches under seedling trays, keeping the seedlings’ growing medium at an ideal soil temperature for germination.  Low tunnels over the seedlings keep the ambient temperature immediately surrounding the seedlings temperate, while the air above the seedlings may drop to near freezing.  It is far more efficient to heat soil than to heat an entire greenhouse structure, resulting in a huge cost and energy savings.

Materials and methods:
Participation Summary
Return to Project Overview
Any opinions, findings, conclusions, or recommendations expressed in this publication are those of the author(s) and do not necessarily reflect the view of the U.S. Department of Agriculture or SARE.