To ascertain the viability and cost savings of using a low- consumption-energy device compared to a commercial device to aerate aquaculture (freshwater prawns) ponds.

Think of an aquaculture pond as a giant fish tank. In fish tanks there is usually a stone at the bottom of the tank that emits little micro bubbles of air produced from an external air pump. The ponds must also have enough oxygen in order for the prawns to survive. As fish increase in size (in this case freshwater prawns) the quantity of oxygen in the water decreases. The larger they grow the more oxygen they use. External measures such as aerators are used to increase oxygen levels. 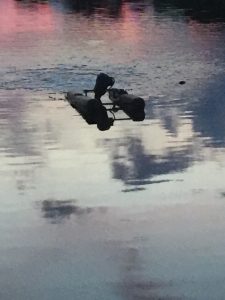 A 2 HP at 220 volts motor powers them. This device is designed to increase oxygen levels, also known as dissolved oxygen (DO), but in turn increases the electric usage considerably. During the summer months our electric bill goes from $90.00 a month to $400.00 a month.

Our proposal will determine if a low cost unit which consumes considerably less electricity, can handle the oxygen needs of one of our ponds throughout the entire season.

We can build an aeration system that uses off-the-shelf components. Based on input information from the air pump manufacturer, our energy cost should be $120.00 a month or a 70% savings from the current operation.

We believe the Aero-Tube aeration hose we will use has significantly higher oxygen transfer rates, which increases higher dissolved oxygen (DO) levels over the standard air stones. 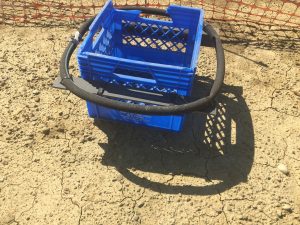 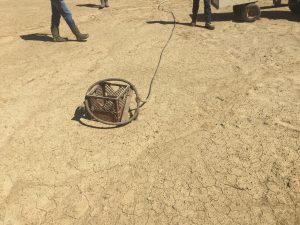 But more importantly, it will consume LESS electricity. Therefore saving us money and putting less of a burden on the generating plant.

Dissolved Oxygen (DO) was routinely monitored in all of our ponds. Readings were done in the mornings between the hours of 6:30AM -7:30AM, when DO levels are at their lowest.

When sunlight hits algae in the water, it produces oxygen. When the sun goes down, the same algae now consumes the oxygen it just produced. With the addition of freshwater prawns also consuming oxygen and most active at night, the oxygen level can decrease very quickly. As the prawns grow bigger, even more oxygen is consumed.

If the DO decreases in the pond with the low-consumption- energy device and air stones, we will switch to the commercial duty aerator.

90% of all shrimp/prawns sold in the US are imported! Most imported shrimp comes from Southeast Asia (Thailand, Vietnam, China and India). These and other countries are not known for following best practices in production especially with the use of “not for human consumption antibiotic drugs”.

A freshwater prawn is a product that is sustainable and would alleviate pressure on the natural environment. According to the Monterey Bay Aquarium Sea Food Watch List, growing freshwater prawns fulfills both of those requirements.  “U.S. farmed freshwater prawns are a "Best Choice" and, with a green ranking in each of the criterion considered by Seafood Watch, one of the most sustainable seafood choices available”.

Producing more of a sustainable product (prawns) and utilizing the same amount of precious resources of water, land and less electricity.  This would lessen the environmental impact of over fishing the oceans by producing an aquaculture product which is locally grown.

The economic benefits are the potential for greater profit using fewer resources. Less electricity used, and also smaller startup costs for the aerators would increase profits. Don’s Prawns are locally grown and in return, we support other local farmers and local businesses. FFA students earn extra income and then spend it, which brings more cash into the community.

A freshwater prawn is nocturnal. You will not see a fresh water prawn during the day, unless there is some environmental issue such as not enough oxygen in the water.

The morning of August 7, the DO levels on the test pond were 0.02 PPM.

The photo below was taken the morning of August 7 showing prawns coming to the edge of the pond trying to get the little bit of oxygen left in the shallow water. A number of prawns did not survive. Once again you should never see any prawns during daylight hours. 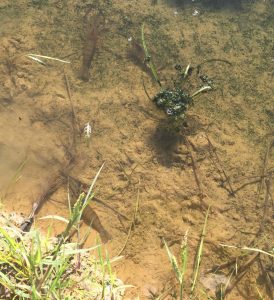 On August 7 we turned on the commercial aerator so as not to lose any more prawns from the test pond.

Preparations for the delivery of the post larvae prawns took place between May 15 and the beginning of June. A group of FFA students prepared the ponds, which included placement of the aerators, posts and substrate. 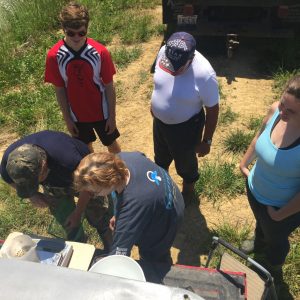 September, 2016, as the owner of Don’s Prawns, I received the Conservation Partner Award from the Fairfield Soil and Water Conservation District.

Before utilizing local FFA students from Fairfield Union High School to help with the harvest; we gave a PowerPoint presentation to the FFA classes. The FFA teachers were kind enough to grant us access for the entire day. The presentation was given to all the classes, approximately 300 students. It was about aquaculture and raising and harvesting freshwater prawns. We were also generating an interest in working the harvest.

On July 19, our aquaculture farm, Don’s Prawns, hosted a tour for the supervisors of the Soil and Water Conservation Districts of Ohio. There were 33 different counties represented (a total of 89 people plus 4 local staff). 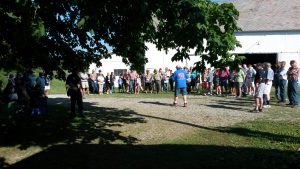 We have been asked to give a presentation about our operation (successes and failures) at the Ohio Aquaculture Association (OAA) annual meeting to be held in January, 2017 in Columbus, Ohio.

First and foremost the contribution of this grant was the education and first time experience most of our FFA students had with the aquaculture industry.

Our student participants showed interest in the process and our operation. They also asked lots of questions about the harvest. After working one day, a couple of students asked if they could bring another student to also help, and this year we were able to use the additional students. Many asked if it would be possible to return next year to work.

Based on the research from this grant, the recommendations for larger ponds (¾ acres or more) would be not to deviate from the use of the commercial aerators. Based on our results, the output from the lower-energy- consumption-air pump could not produce enough oxygen for the prawns to survive.

I believe smaller ponds half acre or less, and stocking rate of five to seven thousand prawns could be feasible for the low-energy-consumption pumps. 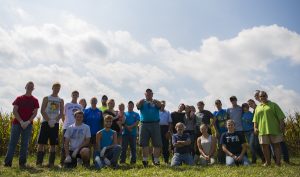 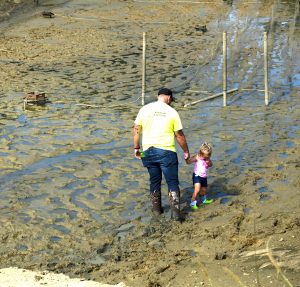