This small farm is on less than 1/2 acre. There are currently 15 egg-laying chickens, 2 hogs, and multiple types of produce grown. It is a small family operation.

According to the U.S. Department of Agriculture, the average age of a farmer in the United States is 58.3 and the number of beginning farmers is declining. We need to get more young people excited about farming! I am 13 years old and love growing crops, raising animals, and learning about farming! I do all of it on less than an acre of land!

This project will show young people that to create a sustainable farm you don’t need a huge budget or multiple acres of land. By growing your own crops, raising livestock, composting manure and scraps, you can have a sustainable farm that will provide food for your family, be profitable, and can help your community with fresh vegetables and meat.

One of the things I spent the most time researching was the shelter for the hogs. I originally was going to build a three sided structure for the hog shelter. After speaking with multiple hog farmers and conducting research online, I decided to purchase a pre-made Quonset Hut which is a steel dome structure with a door. The farmers in the surrounding area encouraged me to get something with a closeable door because of the number of coyotes that are often in the area. This structure would provide the best shelter and keep the pigs safe from predators when they were small. I am happy with the structure I chose because it has held up good to the harsh winds and provided ample amount of protection for the hogs on my farm. 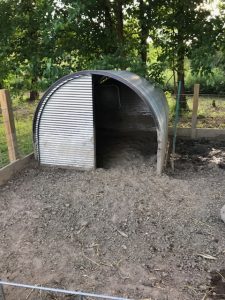 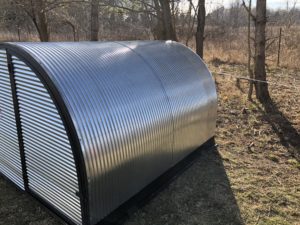 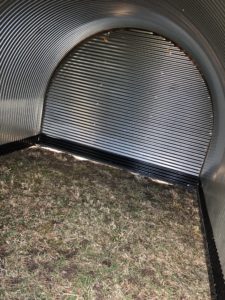 I purchased a composted barrel to use for aerobic composting. This allowed me an easy way to use the leftover garden scraps for composting without spending a lot of time on the work of composting. With a composting barrel you just turn a few times every couple of days and it adds air to the compost so it will breakdown faster.  This worked very well.

However, I found that the barrell did get full very quickly so rather than have to purchase multiple barrels, I also started a composting pile behind one of my garden areas. This I had to turn over and work the soil and compost multiple times a week which was much more difficult and much more time consuming than the barrel. I did need to add grass clipping each week to keep the green material added and the amount of water to keep it moist was shocking.

The compost pile dried out quicker than the barrel but both had to be sprayed with a water hose through the summer especially when it was extremely hot outside. In the future, I will invest in more composting barrels because they are easier to use and I hope to keep them on a rotation so that the compost humus will be ready at various times. This is the barrel I purchased which was easy to turn, held up well, and I would recommend. I will be purchasing more of the same in the future. 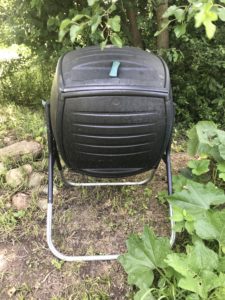 To sustain water for the crops that were planted in the various garden plots and raised beds, I used two rain barrels. The barrels were 50 gallon barrels with a screened top which protected debris from entering the water. I cut the guttering on two sides of my house in order to put the barrel underneath which then caught the rain that flowed from the roof into each barrel. Each barrel was equipped with a easy turn spigot valve at the bottom. I attached a hose to the valve at the bottom of the barrel which then allowed the water to free flow into the garden as needed.  Because the ground was not at a steep enough slope, I had to elevate each barrel using a platform underneath so that the water flowed downhill. 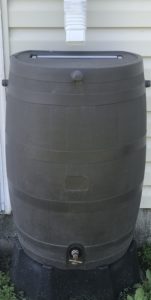 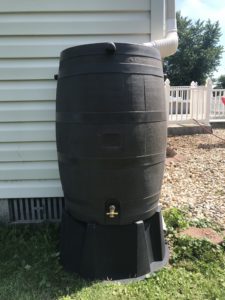 I built an area for the hogs that was 32 feet x 16 feet which housed two hogs per season. This was double the space recommended for two hogs. I used treated 4x4 posts with 2 x 10 boards along the bottom to help keep the hogs from rooting under the fence. Along the gate area, I also buried cinder blocks under the dirt so they could not root under the gate as well. I then attached galvanized hog panels along all sides and attached with u-nails to the wood posts and the wood boards along the bottom. This worked well to keep the hogs from rooting or creating holes to get under the fence. In hindsight , I would have used an electric fence that could have been moved to different areas. The biggest problem with having the fencing as a fixed structure was the dirt became compacted and was extremely difficult to till and work the ground after the hogs were sent to butcher. If I would have used electric fencing, I could have moved the hogs before the ground became too compacted. In the future, I will use electric fencing so that it can be moved and I can work the soil more easily. I will continue to use the fenced area now, but I am also adding on with electric fencing to make the area bigger because I am adding an additional two hogs this year. 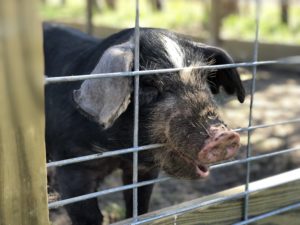 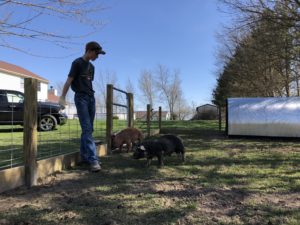 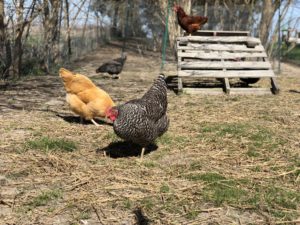 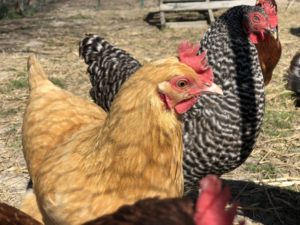 The amount of vegetables that were grown on my small farm provided an ample supply to feed my family and to sell to local community members with the profits gained to help sustain the farm. During the month of July, I was able to harvest over 160 pounds of vegetables from my garden. I kept around 40 pounds for my immediate family, sold around 60 pounds to community members, and donated the rest. I donated fresh vegetables to the local shelter which I discovered was something they were very much in need of. I hadn't thought about it before, but shelters rely on donations, but almost all donations are canned goods and boxed pantry items. So when I took fresh vegetables from the garden, they were very excited to receive them. We were also able to can and freeze extra harvest so they could be used during the winter. 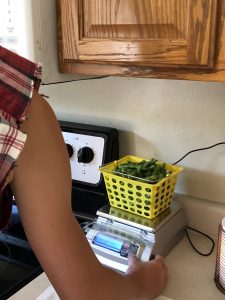 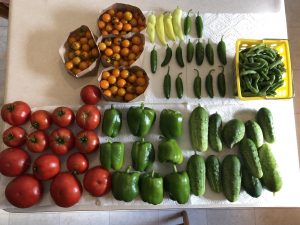 The biggest constraint and difficulty was time. Just having the time to do everything I wanted was difficult. Because I am a student, my days are spent in school and I also have activities and homework after school, so the majority of the work on the farm had to be done on the weekends. The hog area and putting in the fencing took a lot longer than expected. I had my family's help, but it still took two full weekends to complete which I did not anticipate. This is yet another reason to use electric fencing instead. I also had high ambitions to create a YouTube channel to inspire young people to farm. While I started it, it didn't take long to learn that there simply wasn't enough time to work the farm, make improvements, harvest, and document all of it via video. While I still think the YouTube channel would be very valuable to other people, I think in order to make it happen, I would need another person to document the work and video while it is being done and spend the time editing and uploading the videos as well. I wanted to keep detailed records and weigh all of the harvest from my garden, but that was difficult as well. By the time it is picked, washed, and ready to use sell or donate, there simply wasn't enough time to document it all. I kept up with documenting for about a month and a half and then there wasn't enough time to continue doing that.

Overall, I was happy that I was able to produce very little waste on my micro-farm. By using all of the space, planning carefully, and finding ways to use everything available I was able to create a sustainable micro-farm. By using the water collected in the rain barrels to water the garden, it saved energy and water that otherwise would have been used.  By add the food scraps and waste into the composter and then using that in the garden it added nutrients to the soil in the garden. By using every bit of food that came from the garden harvest either for humans, animals, or composting none of that was wasted either.

I definitely plan to continue farming and expanding the farm as best I can. I have a solid base of repeat customers in the community for my pork, eggs, and vegetable produce as well as providing all for my family as well. I have also inspired at least 3 young people (that I know of) to start small gardens in their own backyards. I plan to continue to helping other young people who are interested in farming as well. I was the President of the FFA organization in my high school the last two years and will continue to learn and help others as much as I can.

We conducted a field day on the farm in the summer. We invited local farmers and community members from the area to visit the farm. We especially focused on youth in the area. We advertised the field day mainly using social media, but also hung signs in the local businesses within our small town. We used a lot of word-of-mouth invitations and advertising as well. Being in a small town area, people are easy to reach and word travels quickly through the community. 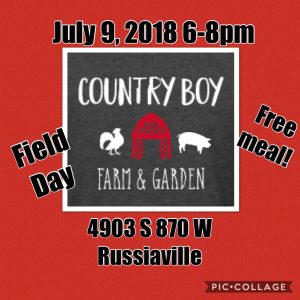 We created posters and informational media especially designed for youth.  Community members were able to tour the farm and children and teens planted seeds while learning about the various components of the farms such as the rain barrels and compost barrels. During this time, results from the project were shared with community members.

For those who couldn't attend the public field day, we scheduled private tours at various times and consulted with many youth members who wanted to start their own gardens or were interested in raising livestock or poultry. 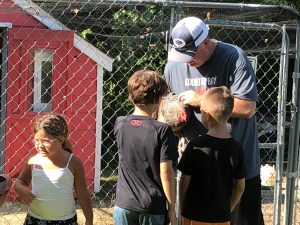 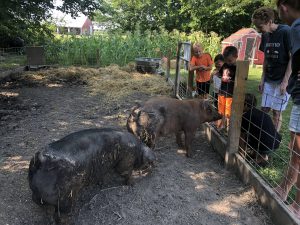 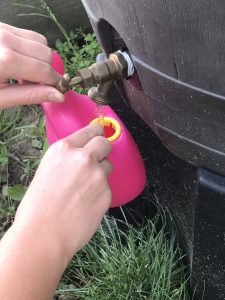 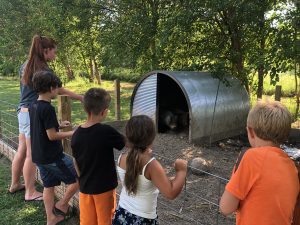 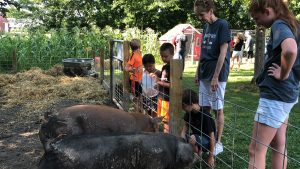 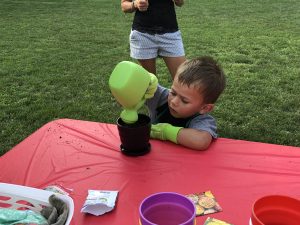 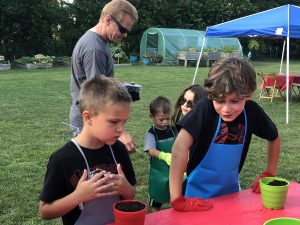 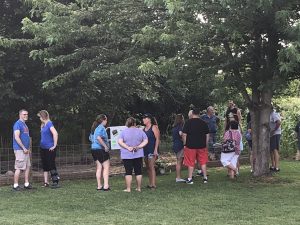 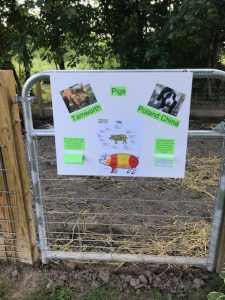 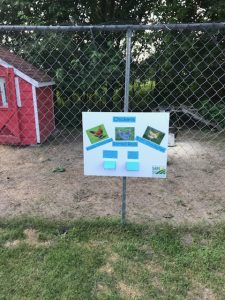 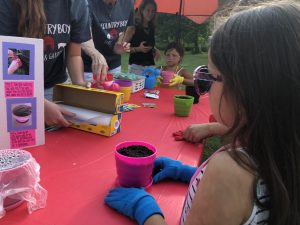 8 Farmers reported changes in knowledge, attitudes, skills and/or awareness as a result of their participation
Lessons Learned:

This grant has allowed me to grow my small farm and share my love of farming with others. My biggest barrier was time. Finding enough time to start new projects and keep up with my crops and livestock was difficult while being a full time student. The advantage of having a micro-farm is that one person can accomplish a lot in a very small area. One of the largest issues I faced was the amount of time that composting takes in order to really be usable on the farm. I did find that a lot of people are very interested in using sustainable resources such as composters and rain barrels, but they were really unaware of how they work and how to get started with them. Also, people were unaware how much they could do in small areas that they have. You can create a usable, sustainable, micro farm that really produces a lot of resources in a very small area.

2 Farmers changed or adopted a practice
2 New working collaborations
Return to Project Overview
Any opinions, findings, conclusions, or recommendations expressed in this publication are those of the author(s) and do not necessarily reflect the view of the U.S. Department of Agriculture or SARE.