We farm 1200 acres certified organic. This is a family operation with daughter-in-law Melany Thomas farming her first year. She took on growing buckwheat, growing barley and peas, and also selling direct to end user.

Developing a regional grain alliance opens markets for farmers, giving more financial control back to local producers while offering other options beyond the dominant corn and soy system. The expanded options helps develop business plans that are more ecologically diverse and economically resilient (as grains can be sold year-round). The grantees are specifically interested in more cover crops and using less costly, more eco-friendly inputs to preserve water and soil. Grains typically travel the farmer-cleaner-middleman-buyer-packer-market route. We plan to shorten the chain and provide stability by offering direct sales while developing long-term business relationships.

Community members will have an option to use regional grains and are able to trace the origins of their loaf of bread all the way back to the ground. Currently, there's not a centralized direct source of food-grade grains in our area. A local grain collaborative could promote healthful varieties like pumpernickel and buckwheat (part of  many New American diets). Grain and mixtures/flour could help CSAs too by creating the possibility of incorporating grains/mixes into their usual assortment of produce. CSA/owners could receive some profit and form important partnerships with grain farmers, while also benefiting from grain sales when produce availability wanes.

Develop packaging/labels/logos of both retail and wholesale sales.

Encourage farmers to take classes and gain knowledge about soil health and importance of crop-rotation.

For the scope of this grant, we plan to use several platforms to track our sales, profits, number of businesses and retail stores, as well as total sales. We can compare that to the traditional practice of simply selling grain to the buyer. We can determine which products are top sellers and pinpoint the best seasons for buying (example: wintertime baking, etc.). We also can compare sales at different venues, for instance, a farmers market, selling through food hubs like Sprout vs. sales at retail stores. We can also track effectiveness of promotions, for instance, comparing the reach and engagement of an ad or boosted post on Facebook vs. in-store promotions. These assessments will give a clear and quantifiable picture of what works and how that translates into our bottom line. We can also track income by crop/farmer. (See above for example of charts we would use.) We also can track where customers are from and whether they become repeat customers to figure the conversion factor.

We can get a good overview of community engagement and challenges by tracking social media comments and analytics and monitoring web traffic. Social media and the web also would help us identify competition and popular price points. We can also use social media to track demographics, age, and other data that indicates a high interest in buying small grains.

We published the soil health day in NPSA as well as the local newspaper. We also connected with NRCS staff as well as Sustainable Farming Association. 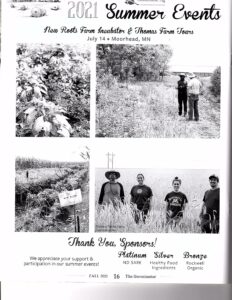 "We opened a new door through this grant. Everything from small cottage pet food makers, to bakers in larger cities. I have never thought about selling direct before and learned a lot." said a beginning farmer.

We were able to sell our cleaned grains but very importantly were ale to sell our scratch grains to hobby chicken farmers, turkey farmers, hog  and cricket growers. We are at zero waste. was one comment from another farmer.

This already has bubbled up to include more grain farmers in our area. Mostly women the resources such as seed, tools and knowledge is quickly being shared and things are moving fast. We have formed a Women in Conservation group staying best practices and sponsored a soil health day for all.