Our family operation consists of 280 acres on which we raise corn, oats, barley, and alfalfa in a rotation. We also maintain a herd of 55 stock cows, 15 sows farrow to finish, and raise 800 fryers.

We purchased our farm in 1977 and farmed with chemicals until 1980. At this time we began a program to eliminate all chemicals and insecticides. In 1983 we used chemicals on one field and that was the last chemicals we have used on the farm. We also eliminated the use of insecticides at the same time. By using crop rotation, ecological fertilizers, and natural products we replaced the chemical insecticides.

The following people provided assistance with the grant program for 1993: William Lansing, soil consultant, provided fertilizer recommendations including calcium and trace elements. Don Irwin, district manager for Dairyland Seed provided the clover seed to use as a cover crop. At the beginning of the project I invited the following people to a meeting at our farm: Denise Chevalier, ISU Organic Project Associate, Greg Welsh, ISU Organic Ag Specialist, and Brad Parkell, New Perspective Video. At this meeting we outlined a plan of action to make the cover crop video.

* Goal
- Use available equipment and the grant money to finance research to measure the effect of the cover crops on the soil and the corn yields.

2) Project Description
* The project began in July 1992. There were three plots. The first plot was an old stand of alfalfa which was plowed down in the spring of 1993. The second plot was of straight clover which was seeded with barley in 1992. The last plot was interseeded with clover between the rows of corn in July of 1992 during the second cultivation. I took soil samples of each plot and also tissue tested the corn plant during the growing season.
* I learned that the clover cover crop can supply much of the nitrogen needed to grow a crop of corn. The clover also causes the soil to stay mellow and to break apart easily when it is tilled. The clover also suppressed the grassy weeds in the spring before it is tilled into the soil.

3) My objective was to determine how much purchased nitrogen I could replace with home grown nitrogen by using green manure cover crops. With the experience I have gained this year I believe a farmer can grow most of the nitrogen you need to raise a crop of corn.

4) The fields were soil tested at the beginning and at the end of the growing season. Plant tissue tests where taken in July and we also yield checked the different plots. When I use the green manure crops again there are three things I would try. When interseeding I would mix in one or two additional types of seed such as rye grass, hairy vetch or nitro alfalfa. I would also no-till interseed winter rye into old stand of alfalfa or clover which would increase the amount of plow down the next year. I also need to till the clover sooner in the spring before it stands 6-8” tall.

Throughout the growing season we video taped each step we took to include green manure cover crops into the raising of a crop of corn. All the video taping was edited in 15-20 minutes. The finished video will be made available to interested people through direct mailing and advertising in the New Farm Magazine. A farm tour was held on September 16, 1993. About 50 people attended the farm tour. Written results and overhead transparencies are made and will also be used at meetings to share the results with other people. 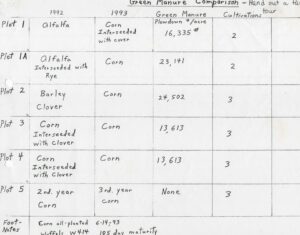 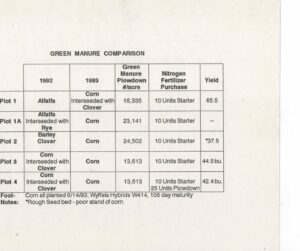 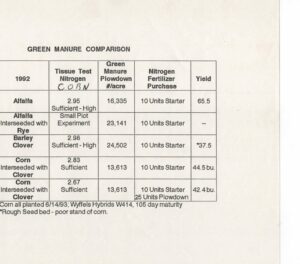 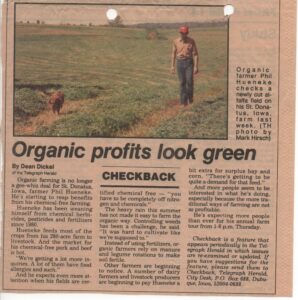 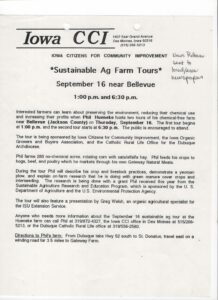