This project set out to provide a low cost, easy to use method for tracking livestock anywhere and accessing the data about livestock movement from a PC web or hand held device. The final product from this project tracks specific animals in a single pasture including 1) normal movement, 2) non-movement which could indicate sickness, entrapment or death, 3) loss of animal via theft or escape 4) excessive movements indicating stress or predator presence. Using existing technology livestock are tracked remotely without visiting the pasture. Pasture grazing patterns are captured to help improve pasture management.

Miles Smith Farm has a successful track record producing and selling beef products since 2002. MSF owners Carole Soule and Bruce Dawson have actively developed their brand and supported New Hampshire beef production with retail sales of over $400,000 so far in 2013.  We currently have 60 head of beef cattle, which we feed baleage from October to May.

With over approximately 250 acres of off-farm leased fields in 6 different locations. Expected cost savings will be about a 26% time savings in tracking and counting animals in our rotational grazing program.

Bruce Dawson, a computer professional as well as a farmer has worked for over 30 years in the high tech industry. He has worked as a systems engineer for Digital Equipment Corporation, Compaq Computers and was hired by Nokia to create test processes for new multi-media cellular phone systems. Bruce has also worked with HP (Hewlett-Packard) to design tools to systematically verify correct operation of new hardware and software. He has designed, implemented and supports several end users websites including LNF http://www.learningnet.org/, Cole Gardens Winter Farmers Market http://www.concordwintermarket.com/ and The Attorney General's Website in the USVI http://doj.vi.gov/ and Miles Smith Farm http://www.milessmithfarm.com/

Bruce has researched this project for two years and has created a prototype which is ready for implementation and field testing. Our technical adviser will assist in setting up appropriate testing conditions to track 1) ease of use 2) data captured is accurate 3) data collected is easy to read and useful to the farmer.

Carole Soule is an experienced manager who has also worked in the High Tech at HP for over 16 years. She has managed a grazing SARE grant awarded in 2011 and has managed grants awarded to the farm from the NH Dept of Agriculture, USDA (EQIP, Rural Development, FMPP).

This system is using the XBee's internal serial number to identify each animal (the XBee is a miniature radio modem on the ear tag – see attached diagrams). The system will use radio wave time-of-flight and statistical averaging with tri-laterization (see http://en.wikipedia.org/wiki/Trilateration) between the tag and base station(s) to determine each signal's origination.

Issues this system addresses include:

1) Measuring the time of flight for a radio signal, which is crucial because:

Our system resolves these problem by:

This proposed system uses IEEE 802.15.4 wireless modems on the ear tags. Depending on the orientation of the animal, the tags can be read from up to 1 mile (5000 feet). away. The ability to quickly and effectively read the cattle's tags from this distance enables a couple of things. Farmers can do faster, easier, and more frequent head counts of the herd by looking at a website or smartphone to get an accurate head count. If an animal is missing, the rancher can take immediate steps: fix a fence, locate a cow that has wandered off or be alert for rustlers.

Because wireless modems are employed, two-way data communications with the animal is possible, but this project does not address those possibilities; the objective of this project is to simply get the basic system operational and track animal location.

This project remotely monitors the location of large livestock and potentially, equipment. (“Large” is typically greater than 75 lbs.)

Objective 1: With 98% accuracy, count the number of livestock in two separate fields using a computer or smart phone application.

Method: Five ear tags were built.  It turns out that only four were working.  One never worked correctly.  Because development of the system took almost two years testing was restricted to the home farm in Loudon.  Extensive beta testing was done prior to putting tags on cattle.  Beta testing indicated that “line of sight” to the three base stations was necessary.  Also “line of sight” from the base stations to the WiFi receiver was also required.

We set up a test condition in a flat field that where the tags on the cattle had a direct line of contact to the three base stations.  There were no trees, brush or hilly terrain between the tags and the base stations.

Objective 2: With 98% accuracy determine the movements of livestock within two separate fields using a computer or smart phone application.

Method: Monitoring was one in one field using four test cattle wearing ear tags with battery powered radio signal electronics.  Because the life of the batteries was restricted by the cold weather only an hour was used for testing.  All four animals were successfully tracked as they moved around the field.

Tracking was successful in these conditions:

Tracking was not successful in these conditions

The testers reviewed the data collected during testing. They evaluated:

Objective 3: Demonstrate an application for counting and tracking livestock that is less than $300/base station and less than $35/tag.

Method: The actual parts costs were:

Of the above total, about $680 was originally planned for (Beaglebone Blacks,  XBee adapters, power converters, GPS, and XBees). “Consumables” were the weatherproof enclosures, connectors, batteries and holders, and unusable WiFi antennas which totalled $331.56. Unplanned, but necessary for real-time data collection in pastures (due to the distances involved) were the Ubiquiti AirMax WiFi and Enterprise WiFi equipment, totalling $1212.85.

Another purchased item was a power inverter to expedite testing and “in field radio surveying” for $50.00. This was used to power a personal laptop and antenna to find places of radio interference in the fields we were testing in because there was no A/C power in the field. Although it is not absolutely necessary to this project, it was a big help in establishing radio communications with the WiFi Router.

Note that a number of items were used that are not listed above, such as wire, solder, batteries, tractors/trucks, … that are available on most farms.

The base station costs were more than double the anticipated cost of $300/base station this was due to unexpected development costs.  Base station cost can and will be reduced if  and when volume units are produced.

Each ear tag cost about $41 which is very close to the projected cost of  $35 per tag. 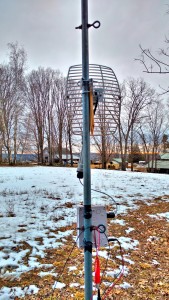 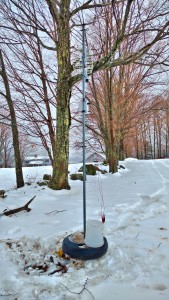 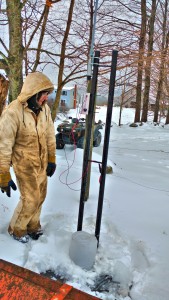 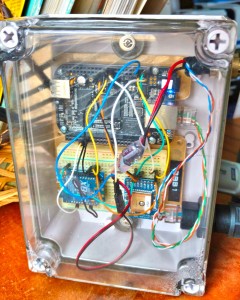 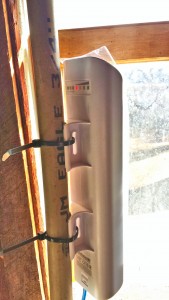 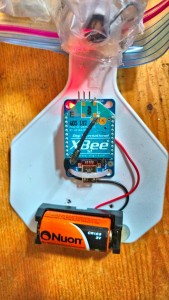 The Base Stations collect data using radio waves from the livestock ear tags. Using XBee technology each ear tag used radio signals to communicate with the base stations. 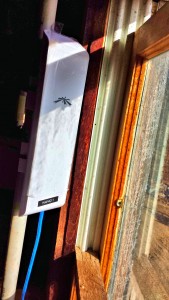 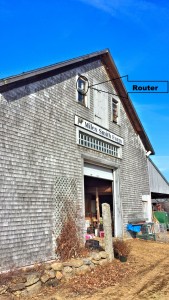 The testers reviewed the data collected during testing. They evaluated the following:

In it’s raw form data was clear but too detailed.  A program needs to be written to convert the raw data to be displayed on a graphical interface.  Cattle locations should be displayed so they can be watched in real time on a screen.

There is great potential for the data to be useful but in its raw form it is not easy to determine where the livestock are in the field.  It is obvious that the program is tracking where each cow is.  This data needs to be converted so that it is easy for anyone to evaluate.

The raw data was correctly displayed on both a laptop and smart phone but again it was too detailed.  The data should be displayed as a graphical display so that livestock locations can be tracked.  Also an historical interface should also be made available.  The raw data is stored so an interface that allows a user to request data from a specific time can be made available. 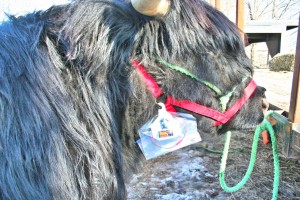 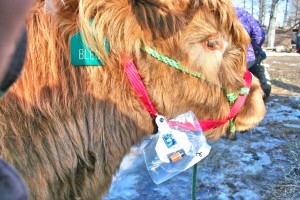 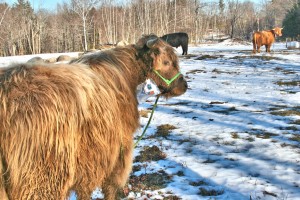 This project has accomplished the following:

libxbee - An open source Application Program Interface that permits software to communicate with XBee radios at the API level instead of the less powerful terminal command line level. This was developed by Attie Grande http://www.attie.co.uk, and is included in the kit without change.

The results of this project were presented at the 10th Annual Granite State Graziers New Hampshire Grazing Conference called, "The Dollars and Cents of Grazing,"   on Saturday, February 20, 2016.  The presentation for this conference is attached.  At the conference we demonstrated how the systems works using two of the base stations and the WiFi Router.  We also put a tag on a small pig pretending that the room was a field and the pig a cow to demonstrate how the tagging system works.

The project is currently listed on the Farm Hack website at http://farmhack.net/tools/farm-item-locator The kits can be downloaded from:

The above two files contain a full kit including source code and build instructions (see the README file in the kit). Each kit is for a different architecture; the “armv7” is the kit for the base stations; and the “x86_64” is the kit for development on a desktop workstation.

The “official” site is farmhack.net, but it is not currently able to handle software distribution. 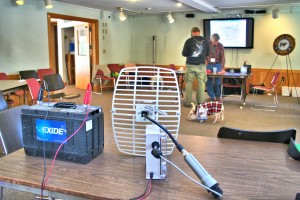 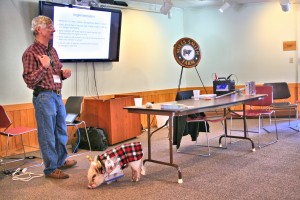 To demo the project two antennas and base stations were setup to track an ear tag attached to a pig (dressed up like a cow)
An ear tag was attached to a small pig (disguised as a cow) at the Granite State Graziers Conferenece to demo the system.

Bruce Dawson reached out to several other organizations during the project. However, with the notable exception of BovControl (http://www.bovcontrol.com), no others have expressed a desire to continue a relationship.

BovControl made available their development lab in Boston, MA so that we can develop a better “ear tag”. We were able to come up with a small box that would house both the XBee and two coin batteries. And it was during the on-site testing that we discovered battery power was a real problem for the ear tags.

The following learnings occurred during this project: