Sunset Berry Farm conducted this SARE study to determine the optimal date for planting strawberries in Southern West Virginia. The first planting was done on the date which is currently recommended, which is August 15, followed by three additional plantings. Each crop was planted two weeks apart for a total of four planting dates. We discovered delaying planting the Chandler variety by two weeks provides the same desired yield (1 pound/plant) as the recommended planting date but has significant benefits. Benefits include decreased weed pressure, decreased deer damage, less runner development and gives producers additional time to harvest late summer crops and get cover crops planted. We also discovered that the variety Sweet Charlie, when planted on September 20, produced a full early crop the next spring.

As a result of this study, we have changed the annual strawberry planting time period to the first week of September. Outreach was provided to producers at the West Virginia Small Farms Conference. An on site field walk was organized and co-hosted by Brian Wickline, WVU Extension Agent, and Dr. Lewis Jett, WVU Extension Service, Horticulture Extension Specialist. The field walk was well attended by producers, middle and high school students and staff from NRCS (Natural Resources Conservation Service). Outreach was also posted to the farm website sunsetberryfarm.net.

Sunset Berry Farm and Produce plans to aid in the determination of optimum planting dates using different cultural practices that will allow producers to push back the planting season from summer to fall, after summer crops have been harvested. Fall planting will decrease field time, resulting in less weed growth and minimize exposure to pests and deer. By eliminating or drastically reducing current threats that interfere with successful production, strawberries can become a significant agricultural product with excellent monetary return for West Virginia farmers.

Proposed study:
* Four successive plantings will be made on August 23, September 5, September 20, and October 4.
Plantings will be made in the field settings using plasticulture.
* Floating row covers and black plastic will be used in an attempt to achieve the required 600 hours at 50
degree temperatures. A control group will also be established using no row covers and no black plastic mulch.

Strawberries are in high demand but there is low supply in West Virginia so this is an excellent crop for farmers to consider adding to production and worthy of study. Planting recommendations are limited to a narrow window in August, which is quite early and overlaps with demands of late summer crops, such as sweet corn. Pushing back planting dates for strawberries in West Virginia would be optimal to decrease weed and deer pressure. Our desire is to determine a later viable planting window for West Virginia to increase success for existing strawberry producers and encourage new start up strawberry farms.

With small farms having limited space, time, labor and resources, strawberry production presents a unique challenge. The fragile strawberry is susceptible to severe weather conditions, pests and constant threat from deer intrusion. The consumer demand for local strawberries is outstanding and never satisfied, making this an attractive agricultural product with unlimited possibilities worthy of study. 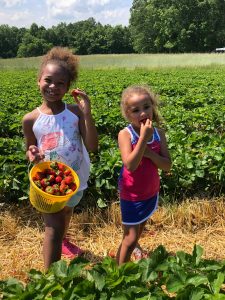 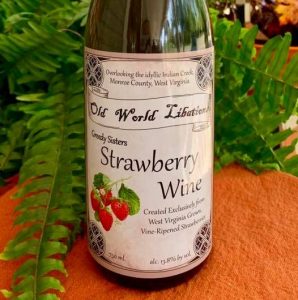 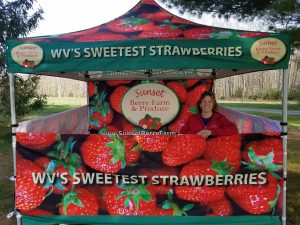 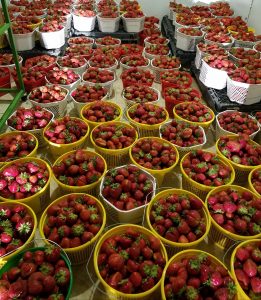 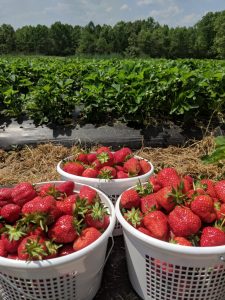 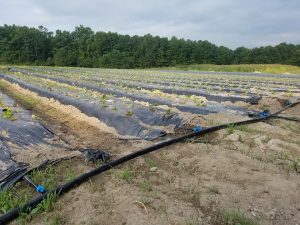 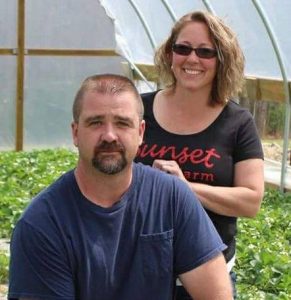 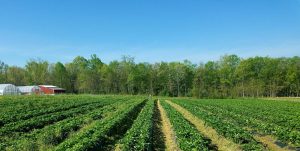 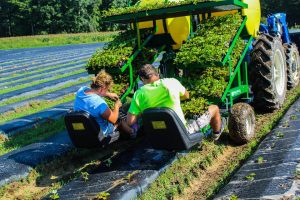 Sunset Berry Farm is a small, family owned & operated farm located in Alderson, a small community in southeastern West Virginia. Kent is a 3rd generation strawberry grower and has been growing strawberries since age 9. We are mostly a two person family operation with additional seasonal contract labor. We expect to hire one full time farm position in the spring of 2020. Field production includes just under 2 acres of strawberries, 4 acres of sweet corn, 1 acre of watermelon, 1/4 acre of cucumbers and a small orchard with apples, peaches & pears. We have 3 high tunnels (purchased through NRCS cost share) for rotation of strawberries, tomatoes, peppers, lettuce and mustard greens. Farm wide irrigation is delivered via drip tape from a 12,000 gallon tank fed by a dedicated well. Markets include four county school systems, one local grocery store, "Cakes & Cones" bakery, "Sweet Frogs" national frozen yogurt chain, 4 farmer's markets, educational field trips, "U Pick" and a "friends of the farm" CSA type membership program.

The control group was planted mid August per current recommendation to acquire 600 growing hours of 50 degree temperatures. The test plots planted September 5th, September 20th and October 4th would be covered with 1.2 ounce frost blankets when temperatures drop below 50 degrees.

What we have learned thus far:

The September 20, 2017 test plot appears to be on track to produce a great crop of strawberries and required less physical labor for runner and weed removal and at this stage appears to be the ideal planting date.

Day length hours, and not just temperature, is theorized to play a significant role in branch crown development.

Chandlar strawberry varieties are known for the ability to add an additional branch crown when temperatures begin to warm in early spring so there still remains hope to achieve fair to good production for the later planting date.

All plants are sown in beds of plastic mulch for this project.

This year (2018) for the first time, we were able to get all of our sweet corn harvested and our cover crop planted before we had to stop to begin planting strawberries. This was particularly helpful given the amount of rain we received shortly after planting which would have made it difficult to get into the fields.

In retrospect we learned many things over the course of the project. The first two plantings of 8/23/17 and 9/5/17 gave very similar and favorable results with regards to branch crown production but the 9/5/17 group required minimal runner removal. These two planting dates produced a full crop of 1 pounds of fruit average per plant May 15-June 5,2018. The next planting on 9/20/17 had less runner development with only acceptable production at 3/4 pound per plant average fruit production May 15-June 5, 2018, but this is not reaching full potential. The last planting on 10/4/17, while having to spend minimum time on runner removal in the fall, did not produce acceptable production yields May 15-June 5, 2018, at only 1/3 pound per plant.

The later plantings began blooming earlier in the spring which results in earlier production which can demand higher prices. Although production is earlier, the total yield on the last (10/4) planting only averaged near 1/3 lbs per plant. The plants seem to send most of their energy into producing a massive amount of runners. Another down side of the earlier blooms is additional frost protection requirement. Frost blankets were applied and removed on the later plantings four additional times as compared to the earliest planting.

As a side note we planted 5000 Sweet Charlie plants on the 9/20/17 planting date and they flourished and produced a full crop of fruit in spring 2018. The berry size of this variety drops off quickly but the taste is very good. This was good information for us in case for some reason we have to plant that late in the future we will go with this variety. Sweet Charlie also requires less growing hours than Chandler variety and therefore a great choice for late planting.

We learned many things about planting dates during the course of this project. With the new knowledge we changed our planting dates to the first week of September which pushes back the date by two weeks from what is currently recommended. Even moving the dates back just two weeks allows us to get other work completed e.g. picking corn and watermelons that normally would have to be completed at the same time as strawberry planting.  We may even be able to push things further but with unpredictable weather this is where we feel safest to keep yield where we need it to be.

As a result of this study, I will use the first week of September planting date in the future as opposed to August 15, which was the recommendation prior to this study. It gives us much more flexibility in getting other farm chores completed and still produce a high yielding crop the next spring. I worry that planting the Chandler variety much later than the first week of September will not yield enough to be profitable.

The group toured lettuce and strawberry high tunnels, as well as the strawberry field production, including the research plots. The group observed the progress of the various strawberry plots and was briefed on the details of the research project. There were other strawberry growers in attendance and each of them expressed interest and a desire of being informed of the end results of the research.

Farmers reported that they learned not only that planting dates can have effect on berry production but also on the timing of bloom in the spring. The very latest planting showed the earliest blooming. Blooms were observed 7 to 10 days earlier with the last two plantings. Blooming commenced on the latest planted berries at the same time as sweet charlie that we had planted in a different plot. Sweet Charlie is know to be an early producer.

We learned many things about planting dates during the course of this project. With the new knowledge we changed our planting dates to the first week of September which pushes back the date by two weeks from what is currently recommended. Even moving the dates back just two weeks allows us to get other work completed e.g. picking corn and watermelons that normally would have to be completed at the same time as strawberry planting. Other significant benefits to planting two weeks later include a healthier crop due to less weed pressure, decreased deer damage, decreased runner development and a reduced demand for labor to pull weeds and remove runners.

We may even be able to push things further but with unpredictable weather this is where we feel safest to keep yield where we need it to be.

As a result of this study, I will use the first week of September planting date in the future as opposed to August 15, which was the recommendation prior to this study.

After completing this study I obtained a copy of the NC Strawberry growers association guide that actually states that row covers for fall growth is not recommended for Chandler variety because they will not harden off before winter and will experience cold damage. Their guide does state that row covers do seem to help other varieties such as Camerosa with no adverse effects. Due to the warm weather we did not have to use the row covers to obtain the 600 hour growing units and did not experience cold damage to the plants. Given this, it would be beneficial to repeat this study utilizing row covers with other varieties, such as Camerosa.

This study will benefit growers in southeastern West Virginia.