Our objective is to test treatments that can provide cost-effective cold protection for grape production, and enhance winter survival of cold-sensitive V. vinifera grapes in cold-climate states of the northeast. We will study the effectiveness of relatively low-cost physical tenting and low-hoop systems, using both greenhouse plastic and geotextile fabrics to protect vines in test, and compare the results to use of a standard small high tunnel system which has been previously tested for use with grape production in other parts of the US. We will also test the effectiveness of a food-safe coating that has been shown to be effective in inducing cold tolerance in apple and grapes in limited trials. We will compare these treatments to appropriate control vines, and to vines that we bury in the winter as is done in some vineyards in Canada (with mixed results). We will ventilate the protected systems through much of the year, but keep vines under cover during cold weather extremes and spring frosts. Temperature, humidity, soil moisture content, winter bud survival, ventilation frequency, vine death/necrosis, disease/pest ratings, spray treatments required, veraison, harvest yield and sugar (brix) will be assessed as a measure of treatment success. A cost analysis comparing treatment types to yield and harvest quality will be conducted. Our results will be shared with the agricultural community in cooperation with University Faculty/Extension personnel, and an Open House/Tours will be given to help disseminate both successes and failures of our study to other vineyard owners and managers.

This project seeks to increase the winter survival of cold-sensitive grape varieties in New England through the use of lower-cost cold protection systems that have not been tested in the northeast under extreme cold conditions. In addition to the testing of the physical tenting and modified low-hoop systems, we will combine some covered protection systems with treatments to induce cold-hardiness in the vines. Our covered systems will be compared to untreated vines, vines that are buried in the winter months, with vines protected by a small high hoop system as a reference treatment. Our objective is to provide data that will allow determination of the best systems to provide cost-effective cold protection for grape production in cold climate states.

Approximately 5-15% of vineyard production is lost in the US to cold damage annually, and these losses are greater in the northeastern US where vineyard owners struggle to produce a quality product from cold-sensitive Vitis vinifera, while battling extreme winter cold as well late-spring frosts. Preventing cold injury to vines is a key viticulture concern in many grape growing regions (Evans, 2000; Zabadal, Dami, & Goffinet, 2007). European grape varieties such as Cabernet Franc grown in California and most of the world, are desirable because of both quality and marketability of the wine produced. American grape stock, such as V. labrusca and V. riparia are cold-hardy but are less desirable from a marketability standpoint and wine produced particularly V. labrusca varieties, can have undesirable qualities such as a “foxy musk” flavor that reduces the quality of the wine.

Our goal in this research is to increase the winter survival of cold-sensitive grape varieties in New England.

We propose to test different types of protected agriculture systems combined with other treatments that can reduce cold injury.

The three protected systems that we propose to compare are: 1) a low-tent system using both geotextile fabric and greenhouse plastics which, in limited Canadian research trials have been useful for vine protection, 2) a modified low hoop system (“trellis-hoop”) system, and that we propose as a lower-cost, low maintenance design for cold protection, and 3) a conventional high tunnel system, which has proven cost-effective for high-value grapes. In combination with these physical protection systems, we would also run comparative tests with a novel cold hardiness-inducing treatment, ChillBanTM, under development at Oregon State University.

Our research will include a cost-benefit analysis to demonstrate whether the systems would be cost-effective, and to show where improvements could be made to further reduce costs while improving yield/quality. We would compare the tenting, modified trellis-hoop and high tunnel to Control/Reference treatments, which will include uncovered vines except for the graft union and complete vine burial during the winter months, which has been used with some success in Canada (although lower yields with more disease is reported to occur with vine burial systems). ChillBanTM will also be integrated in our tests. Ambient temperature, relative humidity and soil moisture content will be monitored for each treatment to determine when ventilation of covered systems is needed, and to assess the frequency of damaging cold and spring frost temperatures. We will assess nine treatments as outlined in the Methods and Materials section of this proposal.

Both positive and negative results may occur with the protected systems and these will be reported. Downy mildew and mite activity can increase depending on how humidity is regulated, whereas insect pests like Japanese Beetle have been reported to be greatly reduced (Chien, 2011). Vine damage due to overheating in winter months may occur if venting is not done judiciously. However, reduced cold injury should also decrease occurrence of crown gall (Agrobacterium) infection.

Many vineyard owners throughout New England have similar problems with winter damage that we experience in our vineyard, and we are proposing using our vineyard as a model cold-protection test system. We propose working in cooperation with UMass Researchers and Extension personnel as outlined in the Outreach section and the appended Support letters.

We will test Cabernet Franc vines, planted in 2016 at our vineyard using a VSP training system:

Ventilation of all systems (rolling up the side fabric) would occur much of the year to allow vines to harden off and acclimate. We anticipate the systems would be covered in the 3 coldest winter months and during spring frosts. Temperature monitoring will cue us to vent on sunny but cold days, when temperatures increase above 30F inside the tunnel/tents for extended periods.

Induction of cold-hardiness: Following the recommendations of developere Clive Kaiser from OSU, 2 applications of Chillban were made on two different dates.  These applications were made with a Solo, PackBlast sprayer.  Researchers at Oregon State University have developed a novel proprietary plant coating, ChillBanTM that induces cold tolerance in apple and grapes. Limited testing of cold-hardy induction treatments on grapes has occurred at the extreme temperatures that we have in the northeast. The treatment is a food-grade plant-based coating that, in addition to enhancing cold-hardiness, also increases fruit sugar content, firmness and speeds-up maturity by 7-10 days. Application will follow recommendations by cooperators Professors Clive Kaiser at OSU and Barry Goodell at UMass: A knapsack mist sprayer will be used to apply the material at a rate of 60 gal/acre (droplet size >150 µm, with travel speed <2 mph), with 3 treatments in August, September and early October.

Vine-Burial: Winter vine-burial treatment (vines detached from the wires and buried through the winter) will be compared to the protected covering treatments and to untreated Control vines. Prior studies with soil-burial in eastern Canada have shown that burial is effective for winter-shelter, but that yield is reduced and damage to the vines with increasing disease can occur. Burial will require coverage with 2-inches of soil after detachment of the vines from the wires, and will occur in late October after harvest and before soil freeze-up. Unburial will occur in April after soils have thawed.

will record at 15-minute intervals throughout the test plots, and soil moisture content will be assessed on a weekly basis. Irrigation will be initiated as required in summer months. Vines will be assessed for overall health and the development of disease/pest problems weekly. Frequency of spray treatments and disease assessment will be recorded in consultation with UMass cooperator Petit. Grape yield/quality will be assessed by weight and Brix measurement, and ultimately by the quality/volume of wine produced. A basic cost-benefit analysis will be conducted with support of University collaborators (see letters of support) and will include all recurring and non-recurring costs and projected benefits, and will be conducted over the 5-year anticipate lifespan of greenhouse/geotextile fabrics.

Our overall design uses 36 vines/treatment broken into 18 vines sections.  These sections were done to keep the treatment areas similar with regards to soil.  Our proposed treatments are:

Initial results, taken from only December during which we had a what I'd consider a 'cold-event', with temperatures reaching -20C, proved suprising. 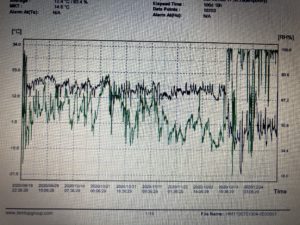 Note that the above graph only shows a low temperature of -14, more than a 6 degree difference!  Of course we are waiting for the real cold winter days to happen but this initial result is encouraging! 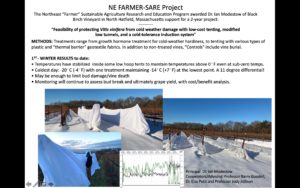 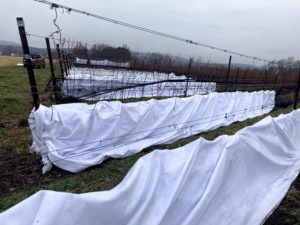 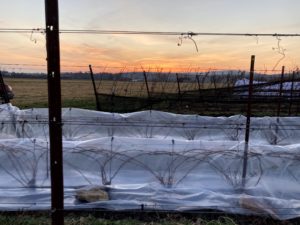 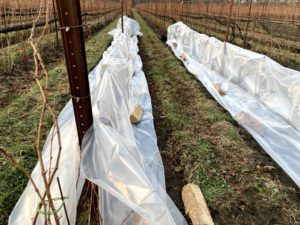 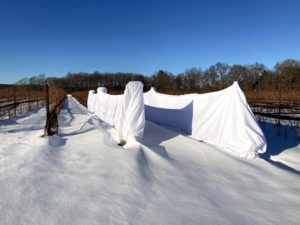 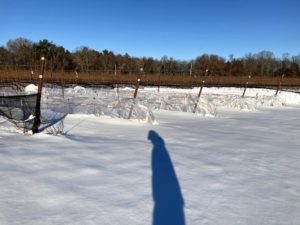