The proposal seeks to address if a physical barrier would intercept adult SLF migration from the surrounding landscape into our vineyard. Following are the key methods to assess efficacy of the treatment:

If successful, this method provides a practical, economical and perhaps the only sustainable agriculture solution currently to prevent SLF damage in vineyards of all sizes.

Spotted lanternfly (SLF), Lycoma delicatula is an invasive insect native to Asia, first discovered in PA in 2014 in Berks County and has now spread to 9 eastern states with additional detections in 5 additional states (attached photos, adult SLF and lifecycle ). SLF falls in Hemipteran insects, meaning it has a piercing-sucking mouthpart, allowing them to drill into phloem of plant to feed directly on sap. SLF has a broad host range feeding on 70+ plant species, including tree-of-heaven, grape, black walnut, red/silver maple, river birch  and sumac (4). Major damages are being noted in vineyards in the northeast region as captured by Paul Vigna (1, see attached, adult SLFs on a grape vine). Feeding damage caused by SLF includes reduced photosynthesis, sap flow, fruit quality, and winter hardiness of the grapevine (H. Leach, personal communication). As SLF feeds, it excretes honeydew, a sugary waste product which can build up on the leaves and cause the growth of sooty mold (attached photo of a grape leaf). This mold acts as a sunblock and can prevent photosynthesis, thereby reducing the energy available for the grapevine. SLF has the potential to greatly impact agriculture, if uncontrolled; this insect could cost the PA state alone $324 million annually and more than 2800 jobs. Many vineyards in eastern PA have incurred substantial vine death and there is no clear long term sustainable solution to curb this pest (1).  PA State Governor and USDA (SCRI CAPS Grant) have allocated $18 million in grants recently for research on SLF that affects the future vitality of the states agriculture industry. Key efforts included in this funding are: quantify impact on at-risk-specialty crops including grapes, conduct fundamental research on pest’s basic biology, ecology, and behavior, develop biological controls contributing to long-term sustainable solutions; deliver management solutions to specialty-crop stakeholders. While research progress has been made on SLF, grape growers are still left with few control techniques apart from the repeated use of insecticides to manage SLF on their farms.

M&M vineyards encountered a major population of SLF in 2020 and in spite of insecticidal sprays; the SLF’s were difficult to control as new populations continuously moved in from the surrounding landscape. In 2020, a small scale study was conducted at Penn State using a 13’ tall insect net wall on one side of a vineyard, covering in netting treated with insecticide (Heather Leach, personal communication, 4). This structure showed promise, reducing SLF populations on the nearby vines by 40.4% throughout the growing season. However, additional height and length was noted as ways to improve efficacy of this technique in the future.

We are proposing to erect a 40’ tall insect net fence around the vineyard on four sides. The top side of the net would be inverted to the outside to create an inverted V arm (2’ long) to create an upside down pocket at the top of the net for SLF to gather after walking up the net. Netting treated with insecticide (long lasting insecticide net, LLIN) will be added to this inverted V pocket at the top in select areas. A small number of vineyards rows (~10%) will be kept outside the nets as negative controls to determine the efficacy of the barrier. SLF studies have shown (personal communication-Heather Leach and Dr. Rajotte, Penn State) that SLF tends to walk upward to reach the top of any object to take the next flight (if it didn’t land on a desirable host tree). Once SLF reaches the top inside of the inverted V section of the net, it will come in contact with the insecticidal netting and die before reaching the vineyard. The number of dead SLF at the base of the wall will also be recorded regularly throughout the growing season.

Most state and federal grants funded are looking for a long-term solutions to the problem, an important goal for overall control of this invasive species. However, grape growers are left with only one effective solution at present: repeated insecticide applications. Frequent use of these broad-spectrum insecticides is not economically or environmentally sustainable and can cause other issues, including killing beneficial insects and flaring secondary pests. SLF is a serious pest of grapevines causing plant health and yield declines, and new management tactics are desperately needed in vineyards to effectively control this pest. This proposed measure could both decrease the use of insecticide applications in vineyards and the number of SLF in the vineyard and suggests a promising new tactic for SLF management in vineyards. 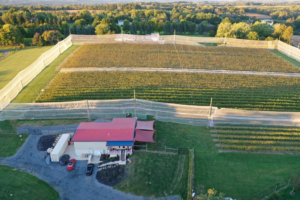 The plan includes erecting 40’ high insect net around the vineyard (2000’ total length). See attached photo of the treated or inside the netting  vine rows and untreated or outside the net vine rows. 52’ long utility poles will be buried 7’ deep in the ground at the periphery of the vineyard 100’ apart. Multiple high tensile strength, 12.5 gauge steel trellis wires will be installed on the poles to hang 17’ wide insect nets with overlapping ends tied to the trellis wires. Top end of the curtain will have an inverted V design to the outside. Two of the four sides will have insecticidal netting (30” wide) running across the length.

The project started in the spring of 2021 initiating baseline data collection reflecting the presence of spotted lanternfly (Blackening of leaves and trunks/cordons and presence of egg masses) in the vineyard during year 2020 (see Table 1 below) . Three attributes of the SLF presence included, Vine Trunk/Cordon blackening, Egg masses on vines and leaf blackening due to SLF presence and their sugary excretion consequently leading to sooty mold growth blackening vine parts. Data were also collected in the Fall of 2020 counting live SLF on select number of vines per row (Table 1). The installation of netting around the vineyard was completed early August -2021 (see photo under materials and methods). During the months of September and October, 2021, additional data were collected on the control vines which resided outside the nets (Vine Rows 44-48) as well as on the experimental vines which were inside the nets (Vine Rows, 1-43) (Table 1). Additional data collection is pending in the spring of 2022 (egg masses).

Limited data analyses clearly indicates reduced SLF presence inside the net area and reflects clearly the physical barrier preventing migration of SLF into the vineyard. Further inferences would be drawn and explained in the final report,