This project has two components:

2) An on-farm demonstration of using cover crops, management intensive grazing (MIG), and no-till to monitor whether yields are maintained for malt barley compared to a conventional system.

Spring 2017: Using a no-till drill, a multi-species cover crop blend will be seeded into the prior year’s barley stubble. This mix was planted on May 11, 2017, (30 lbs hayes forage barley, 14 lbs forage oats, 12 lbs forage peas, 4 lbs common vetch, and 1 lb purple-top turnip. The LESA irrigation system was installed on one-half of the existing pivot equipment, acting as the treatment, and the other half of the pivot will have no LESA, acting as our control. Soil moisture sensors were collected to monitor soil moisture in both sections of the pivot to allow us to compare the irrigation efficiency of LESA. Soil data was collected pre- and post the irrigation season. On June 22, 2017, 150 head of 600 lb heifers started grazing the cover crop mix through a MIG system. One June 28, 2017, 63 more head joined the pack. On July 1, 2017 the second cover crop mix was planted using the no-till drill. This second mix was planted incrementally as the cattle moved around the field. This mix included 12 forage wheat, 2.5 lbs sorghum sudan grass, 2.5 lbs millet, and 1 lb forage radish. The cattle started to do the second round of grazing on the MIG paddocks after July 1, 2017.

Producer no-tilled back into barley, with the hopes of reducing fertilizer inputs while maintaining yields. Team conducted a fertilzer reduction trail to monitor yields under replicated plots of 100% recommended fertilizer rate compared to reduced rates of 66%, 33%, and no commercial fertilizer.

The LESA span delivered 3.1 inches of additional water into the soil over the course of the season relative to the original equipment based on an average of data from three locations around the pivot. The 4th location was flooded for waterfowl before we took the final samples. Some water movement was detected as deep as 32 inches under the LESA and only to about 12 inches under the Control.

In a recent Western SARE project, a producer was looking at the use of cover crops as a forage source for stocker cattle from June – October. To accomplish this, a 148-acre pivot was seeded using a no-till drill to plant a cool-season mix of forage barley, forage oats, forage peas, common vetch and purple top turnip (Table 1) the second week of May. All the species in the mix grew successfully, however, not all had the same regrowth and forage potential. The oats and barley in the mix grew quickly and provided feed early. Once grazed both the oat and barley showed regrowth potential by producing additional tillers but oat was more productive in regrowth. As the longer days of summer came on the barley headed and more or less finished. The oats headed but continued to produce new tillers as well.   The peas and vetch responded well to grazing when grazed early.  The peas were available earlier on, while the vetch, a perennial legume, took time to germinate and grow. The turnips grew quickly providing greens and tubers which were excellent feed, especially as the cattle learned to eat them.

Following the first grazing of the cool-season mix the producer planted a warm-season mix to add additional late summer forage and to provide high-quality fall grazing. The mix was no-tilled into the grazed paddocks starting July 1 (Table 2). We determined that the warm season mix was not as effective because it was not able to compete with the residue and regrowth from the cool-season mix (Figure 1).  Also as the oats and barley headed out, seeds were dropped which sprouted and provided adequate fall forage.

Choosing your cattle and when to use them:

In the Western SARE project, 45 days after seeding, cattle were put into the first grazing paddock. Paddocks used in this management intensive setting were approximately one acre in size and contained 200 head of 600 lb. spayed heifers. The pasture manager realized after a few days that the forage was getting ahead of them and decided to increase paddock size to 6-8 acres/day to allow the heifers to graze off the top of the plants to keep the field in relatively the same growing phase. In a management intensive system like this one, or others, it is best to get onto the forage before you think it is ready. To effectively graze this system, it would have been more efficient to have upwards of 300 head of cattle. With these many cattle, you could graze larger paddocks and cover the field quicker. You could also split the herd into two grazing groups of 150 head to cover the field.  This allows you to get the most benefit out of the field, without letting the cereal varieties in the mix head out. One area of the field did not get grazed until late July and the cereals had gone to seed. Forage quality in this section of the field is compared with another section that was on its second grazing on the same day (July 13, 2017) as shown in (Table 3). As you can see the field that had not been grazed had lower CP and TDN than the field previously grazed.

Most importantly the class of cattle can play a major impact on the profitability of a grazing scenario like this. In the SARE project, the cattle used were spayed heifers. The cattle worked well as grazing units, however, it was noticed there was significant “riding” of heifers which takes away from their grazing activity and can cause injury such as broken shoulders. Using a stocker animal is preferable in this situation because they are in a growth period and can potentially get 2-3 lbs. of gain per day. Using steers may increase your gain/day conversion as well as eliminate the issue of riding and injuries. If you are going to graze cows it may be better to price the pasture on an AUM basis since daily gain will not be as high in the cows.

Cattle Management considerations. Pink eye was a management issue that we observed. Once we got into July-August, there was an increase in the number of cattle that were exhibiting symptoms of pink eye. We believe this was caused when they put their heads down to graze and got the pollen or awns from the headed out cereal grains into their eyes. We don’t have an answer of how to avoid this other than having a greater number of cattle so as to avoid the cereals from heading out. Most of these plants were 2-3 feet tall. If they were closer to the ground, cattle would have less distance to put their head into them before reaching the greener forage below. Also, this could have possibly been avoided by including an awn-less cereal variety with less potential for eye irritation.  One final thing to consider is how you will fence and water the cattle. In this situation, they had stock tanks and a water truck to fill those using floats so that water is constantly available. This is a real management consideration as 200, 600-700 lb. cattle can drink up to 2600 gallons of water per day and will need a constant source of water.

Using cover crops in a management intensive system is a novel idea but if executed well can give you good gains on growing cattle while benefiting your fields. Make sure to consider the mix you will use, especially cereal varieties that may cause a higher risk of pink eye. Also make plans for fencing and water ahead of time as this can be a substantial investment and management headache if water is not readily available in the area.  Carefully choose what class of cattle you will use in the system and consider their gain potential and how you will price the pasture.

Although, this first year resulted in a loss of $3,380, the producer is confident that this system can be profitable.

The producer attributes the economic loss to a lower number and class of cattle on the field, and implementing

the MIG a week late, resulting in significant forage loss. In addition, the $1,200 for the warmDseason cover crop

blend did not provide an economic benefit in total forage production. The cover crop blends did not exceed

$30/acre. However, the cattleman benefited from this system, with cattle grading above expectations (85% of

One of the goals of the producer was to reduce input costs for fertilizers. The growing season following the cover crop grazing trial, malt barley was planted back in the field. A nitrogen (N) fertility study was conducted using four treatments (100%, 66%, 33%, 0%) of the calculated N need based on soil tests. Each treatment was replicated four times and plots were 60’x225’ with the center 50’ harvested for yield. The yield result was linear, as expected for N trials, with yields in bushels/acre equaling 124, 113, 105, and 93 after moisture correction to 14.5% for each of the treatments listed above. The rest of the field averaged 123 bushels/acre at 14.5% moisture correction. When the initial grazing trail was established, the producer was not considering a fertility study to follow so the entire field was planted to cover crop and grazed. There was no “check” area in the field left unplanted with cover crop so it is not possible to conclude cover crops added fertility for the next crop. What we do know is cover crops and grazing will not replace N needs with only one year of application. If they would, the yields for each treatment should be closer to the 123 bushel field average.

One poster was presented at the 2018 Our Farms, Our Future conference.

One poster was presented at the University of Idaho Extension Annual Conference. cover crop grazing poster

One presentation was given at the 2019 NACAA AM/PIC. NACAA 2019 animal science abstract

One presentation was given by the producer and an Extension advisor at the 2019 Ontario (OR) Soil Health Symposium.

One popular press article was published in the Progressive Cattle magazine.

A journal article will be submitted spring of 2020 to either Journal of NACAA or Journal of Extension.

A factsheet was handed out the day of the field tour. Field day_Handout

22 Farmers reported changes in knowledge, attitudes, skills and/or awareness as a result of their participation
Key changes:

NOTE: This is a 2-year project.  Below is a summary of the early first-year results.

Below is the field layout with examples of daily paddocks. 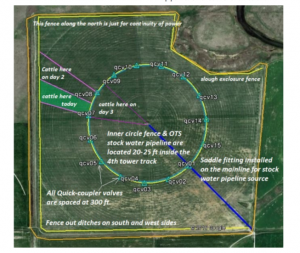 Soil moisture under LESA irrigation was much improved compared to under regular overhead pivot irrigation. 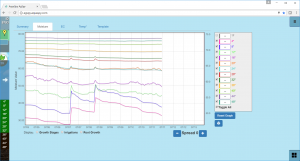 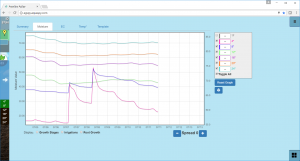 Below is a link to a handout that was used at the first field-day event.

All of the fencing and water system have been removed from the field.  In the spring of 2018 this field will be no-till planted into malt barley, and soil testing will be done and fertilizer strip trials will be conducted to determine the impact of the intensive grazing in 2017.

Because this is an innovative project, where we are using multiple sustainable practices in an Idaho farm, MIG, cover crops, and a multiple planting method of cover crops in one growing season, we have learned a ton. With that, what we have learned from this project, will be very valuable to growers who are also looking to do a similar system. Some specific observational data that will be shared with other producers is: