Washington State is the second-largest wine grape producing region in the United States, with nearly 60,000 acres of “self-rooted” Vitis vinifera in the Columbia Valley. Contrarily, wine grapes worldwide have been produced using vinifera grafted onto rootstocks tolerant of devastating soilborne pests, such as phylloxera (Daktulosphaira vitifoliae) and parasitic nematodes, as well as to mitigate abiotic stressors.

Washington vineyards were first established in land mostly absent of significant populations of phylloxera and nematodes. The next greatest production challenge defaulted to cold injury; vinifera are more cold-sensitive than rootstock varieties. If a self-rooted vine is injured, new growth from the trunk and root system is retrained back to the trellis. If the scion of a grafted vine is injured, the healthy rootstock either needs to be regrafted or replanted, incurring costs that historically outweigh the benefits.

Parasitic nematodes have since established, and in 2019 and 2020, significant pockets of phylloxera were discovered across Columbia Valley vineyards. The only management solution for phylloxera is rootstock use. However, limited knowledge of rootstock characteristics in the Columbia Valley has caused a risk barrier in selection and adoption among producers. This project aims to “take the plunge” by planting a grafted demonstration vineyard where stakeholders can see and learn about establishing, growing and thriving with rootstocks. Through our results, which will be presented at industry field days, meetings and media outlets, producers will be prepared with applicable knowledge on how to select rootstocks for sustainable future wine grape production in the Columbia Valley. 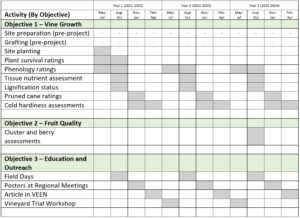 The timeline of activities for each project objective is indicated in the above quarterly Gantt Chart.

Trial Establishment. This research is being conducted at Inland Desert Nursery in Benton City, WA on a 1.1-acre demonstration vineyard that we chose because of known phylloxera pressure nearby, uniform topography and soil type (classified as a Starbuck silt loam with 0- to 5% slopes) and proximity to our farming headquarters for proper oversight and ease of customer touring. Before planting, we collected soil samples to quantify nematodes, chemistry/nutrients, and biology. Fertilizer was added before planting to correct any soil deficiencies, with formulations and amounts documented. One representative field soil test was taken to quantify nematode, nutrient/chemistry and biology levels of the whole field, for the purposes of assessing the effectiveness of inputs, comparing with leaf nutrient values, and monitoring nematode population progression over time. (See in Links 1 and 2)

Rows were oriented North to South. Cabernet Sauvignon was planted on the western edge of the vineyard due to having 1 extra row that could not contribute to the other 5 trial replications. Therefore, we chose another common Washington State planted variety for grower interest/education, using a “salad bar” method of various rootstocks down the same row so vigor and resistance differences could easily be spotted when looking down a single row. Another side benefit to choosing a red cultivar on the outer edge of the block is that it will act as an early indicator for the presence of leaf roll infection from neighboring vineyards. The majority of the trial block was planted to 5 replications of Chardonnay Clone 15. Chardonnay-15 was chosen as the primary scion for analysis because it was a high in-demand variety in Washington State at the time of planting, and this particular clone has been widely farmed with standardized canopy management and growth practices, allowing our farmer-customers the ability to relate to the self-rooted version while analyzing the differences influenced by the various rootstocks chosen. Our Chardonnay-15 was grafted to the following five rootstocks: 1103 Paulsen (1103P), 101-14 Millardet Et De Grasset (101-14), 3309 Couderc (3309), Schwarzman, and SO4/Oppenheim #4 (SO4), and a sixth self-rooted “control” was also used (to which all performance characteristics will be evaluated against). All the non-vinifera rootstocks have high tolerance to phylloxera and some degree of tolerance to parasitic nematodes (Table 1). The trial was planted out in a replicated (5 replicates) block design. Randomization of the rootstocks were not to be implemented within each of the block replicates for ease of long-term tracking and management of the rootstocks (e.g., for potential future trials). Figure 1 shows a visual layout of the vineyard planting design; total vines planted will amount to 1,252, with roughly 200 vines per self-rooted or rootstock/scion combination treatments. After planting, the vineyard was maintained with industry standard integrated pest management and horticultural practices. The vineyard was planted using green growing, potted vines finished at 12 inches in length. All propagative material came from hardwood cuttings from Washington State Department of Agriculture certified mother blocks. Scion and rootstock combinations were “bench-grafted” in close succession using an omega-shaped graft punch. Grafts and cuttings underwent callusing in a controlled environment to heal and protect pruning wounds and the graft union. Once vines were adequately callused, both grafts and self-rooted control treatments were grown in pots in a controlled climate greenhouse, and the most uniform resulting plants were selected for planting in the demonstration/research vineyard. The majority of the specified trial vines were planted in June 2021 utilizing protective vine shelters, resulting in a 99.5% success rate. 278 vines are left to complete the trial planting in the Spring of 2022 as a result of short nursery material on 101-14 rootstock. Planting records confirming the 2021 grapevines are shown below in Figure 2- l. The same vine format, farming process and procedures will be used to complete the block in the Spring of 2022.

Objective 1: Rootstock performance evaluations. After June 2021 planting, we began collecting data for Objective 1. To understand how rootstocks will contribute to establishment success, we documented a survival rate of 99.5% across all combinations in the Fall of 2021, just prior to dormancy (See Figure 2.). We were surprised to see such a high survival rate given the extreme temperatures during the time of planting (a peak of 116 degrees, and a full month of +100 degrees). We will conduct another survival count upon spring emergence. To understand how growth is influenced, the following phenology ratings and measurements will be taken annually: 1) phenological growth stage in May, July, and September; 2) tissue tests for nutrient status at véraison; and 3) weight, average diameter, length, and number of buds on pruned canes collected from November through February (dormant pruning). All measurements will be collected from a minimum of 10 plants in each treatment replication. Phenology will be rated on 6 buds/shoots per plant (a basal, proximal, and distal shoot relative to the vine trunk on each establishing cordon of the vine), for 10 vines per treatment replicate. To assess the impact of the rootstock/scion combinations on vine cold hardiness, we will measure the lignification progress of flag shoots every week from August through mid-October. As would be expected given the early age-stage of the vines 2021 phenology ratings and vine measurements were deferred to 2022, as vine growth was limited and not showing any material differences across the replications. However, we expect to complete the full scope of activities listed above for the 2022 planting year and beyond, as the grapevines will be waking up for a full cycle of growth and shut-down together. In addition to the completed survival ratings, Dr. Moyer’s laboratory conducted cold hardiness tests using differential thermal analysis (DTA) to establish temperatures that produce an LT50 (http://wine.wsu.edu/extension/weather/cold-hardiness/). These samples were collected during the transitional time periods of early November (2 sampling periods) and late February (2 sampling periods). You can see the data for the DTA Testing in Figure 3. Data for Objective 1 needs to be collected over a three-year time span to understand if characteristics imparted by the rootstocks to the scion are volatile or consistent over time. 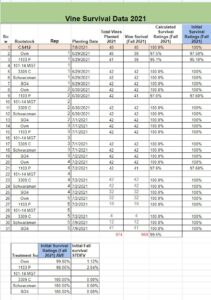 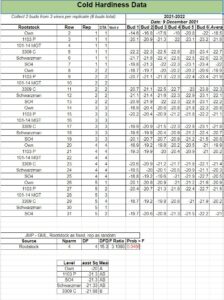 Objective 2: Impact of rootstock on scion fruit quality. Objective 2 will be achieved by measuring fruit before and at harvest in 2023. Fruit produced in prior years will be inconsistent and unlikely to produce significant results due to immaturity of the plants. At harvest in 2023, we will collect the following fruit measurements on a per-replicate basis: cluster weight (average of 20 clusters), cluster count (per vine on 15 vines per treatment replicate), and berry size (of 100 berries). Brix (sugar content), titratable acidity (TA), and pH will be measured on a whole-cluster press on 4 subsamples per treatment replicate (consisting of 5 clusters per subsample). We hypothesize that in a controlled vineyard setting, rootstock variety alone will not significantly change fruit quality for wine making purposes. The data collected for this research objective will be important to wine maker stakeholders, who work closely with wine grape producers for production goals, fruit quality and to contract purchases of fruit from future vineyard developments. The Washington wine industry is often in disagreement about how fruit quality is affected by rootstock, and this is one of the most important justifications for this research.

All data will be subjected to an Analysis of Variance and subsequent means separation using Tukey’s HSD.