Biochar is a high-value soil amendment that is sustainably made from agricultural and forest management byproducts. When properly charged with nutrients and beneficial soil microbes, biochar has been demonstrated to improve both crop yield and yield quality while also increasing soil nutrient cycling capacity, soil water holding capacity and soil organic matter. Increasing soil organic matter is critical to sequestering carbon dioxide to reduce atmospheric greenhouse gasses and mitigate the effects of climate change. Crop yield quality and mass is critical in the cultivation of Industrial Hemp (Cannabis sativa L.) for fiber. We have also begun to observe the effect of these soil treatments on cover crops grown in the crop rotation.

We are observing the effects of a biochar, compost, a biochar-compost blend, and a control treatment on a no-till hemp cropping system that grows a crop of hemp and a cool season cover crop in a calendar year. After pandemic-related delays and shifting life circumstances the project has entered its first year. We have begun to observe the immediate impacts of biochar and compost on soil quality and soon our first cover crop. Our hypothesis remains that biochar presents a net benefit on yield and soil quality. Furthermore, we are assessing if there is a plateau in soil benefits and/or diminishing marginal returns in yield increases.

Test the effects of biochar, compost and a biochar-compost blend on soil quality, cover crop yields, industrial hemp yields and plant quality (as measured by leaf tissue analysis) in a no-till production system.

Note: all gantt chart files are large, it may take a few seconds for the resolution to update when zooming in.

This experiment observes the effects of different treatments of a biochar-compost blend on soil quality, soil nutrient levels and industrial hemp and cover crop production over two years in a certified organic farming system. This experiment is being conducted in Lemoore, CA located in California's San Joaquin Valley.

This experiment is observing the effects of different treatments of biochar, compost, and a biochar-compost blend on soil quality, soil nutrient levels and industrial hemp and cover crop production over the course of two years in a certified organic no-till cropping system. The crops cultivated in this system rotate between a spring-planted Short-Day fiber Hemp and a Fall-Planted Cover Crop blend.

Test the effects of biochar, compost and a biochar-compost blend on soil quality, cover crop yields, industrial hemp yields and plant quality (as measured by leaf tissue analysis) in a no-till production system.

Our original plan for the experiment was to have four treatments with three replications on twelve 25’x225’ ⅛-acre strip plots. After we had defined the twelve test plots, we had an opportunity to add a second type of biochar, from Corigin. Because Corigin and Biochar Now use two very different methods to create biochar, we decided to add it to our experiment. After this planning, we had six treatments:

Due to the late addition of the second biochar type to the experiment, we had to split some of the biochar and biochar + compost plots into 12’ wide plots to accommodate the new biochar types. Our original plan was to have three replications. However some of our biochar got mixed at the wrong rates so we had to eliminate some of our reps. Ultimately, we ended up with the following plots 15 strip plots (A and B indicate plots that were subdivided from 25’ to 12’ wide strips):

Each year, three crops will be grown on the treatment blocks:

The two crops grown on the treatment blocks are as follows:

The soil data collected by Pierce College students tested the soil pre-treatment and the Ward Labs data tested post-treatment. Eventually, the Pierce College student data will include post-treatment; however, this data is not expected to be made available until late April/early May of this year. The plan is for soil tests to continue prior to the application of the biochar/compost blend treatments and after each crop; in order to measure the effects caused by the treatment and any interactions between the treatment and the subsequent sequence of hemp and cover crops cultivated on the plot.

Data collection and observations on crop productivity are conducted throughout each cropping cycle.

Data collection and observations on crop productivity and yields will be conducted throughout each cropping cycle.

On June 28, 2021 Tony de Veyra released a promotional video for a field day to be held at the project site in Lemoore, CA the following month.

On July 31, 2021, Tony de Veyra organized a hemp field day on the farm in Lemoore, CA to showcase the first ever hemp fiber crop in California since 1994. With over one hundred attendees the field day was a success attracting farmers, industrial hemp processors, academics, and those just curious about industrial hemp. The day's educational programming included biochar as a soil amendment where Tony spoke about its benefit to soil health and plant vigor.

Attendees were asked to take a brief survey that sought to measure the impacts of the day's educational content. Of the roughly one hundred attendees, thirty-five completed the survey. 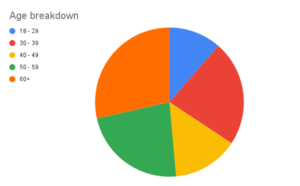 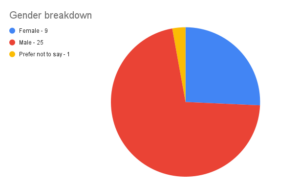 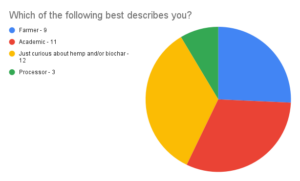 Summarized in these three charts the sample demographic was overwhelmingly male and skewed older. In this group, nine self-identified as farmers. Furthermore, taking into consideration farmers plus those who responded as processors and academics twenty three respondents total were considered ag professionals.  Ag professionals are defined as a combination of respondents who self-identified as a farmer, academic, or processor.

The survey instrument asked attendees to rate their knowledge of the two key project elements, industrial hemp and biochar, on a scale from one to five. One being the lowest “low knowledge” and five being the highest “high knowledge”. 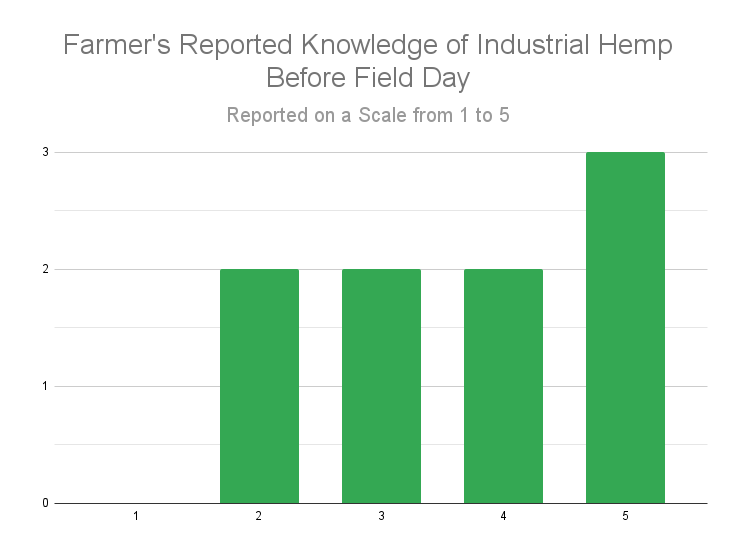 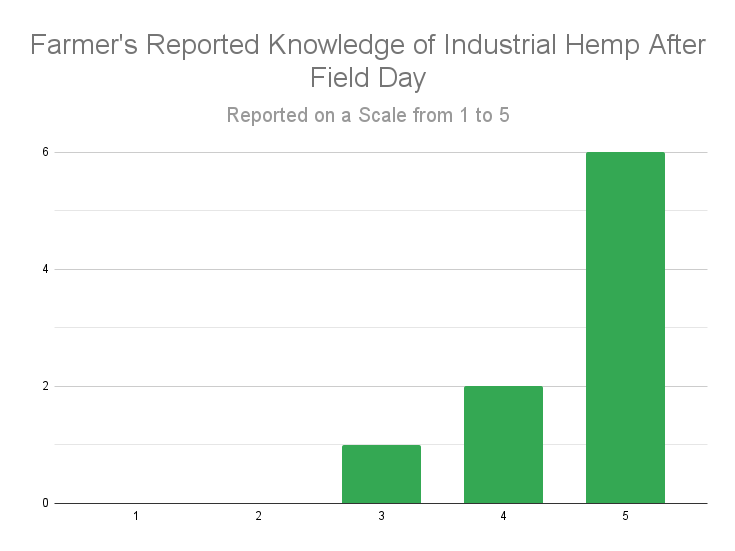 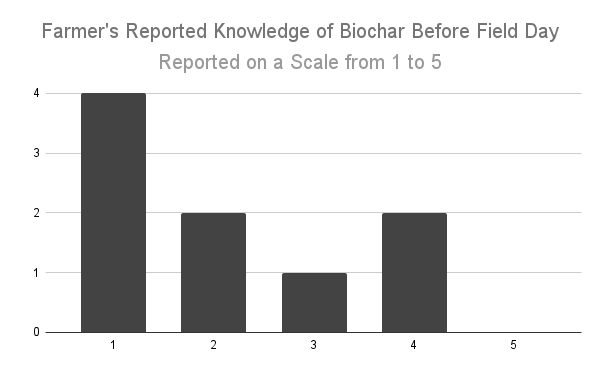 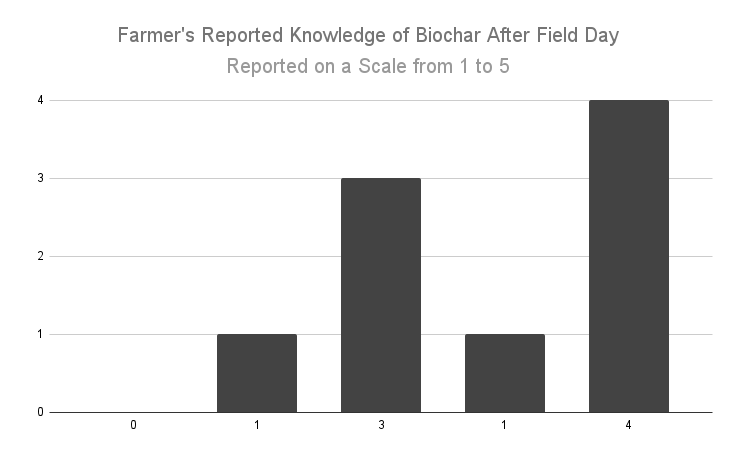 Self-reported biochar knowledge, on the other hand, skewed right and exhibited more variance before the field day programming. After, the skew reversed and self-reported farmer knowledge increased.

With such a small subset of survey respondents identifying as farmers we cannot test for statistical significance or run a deeper analysis. However, we are able to conjecture about the changes before and after for each subject. For industrial hemp, having no respondents rate themselves as “low knowledge” isn’t surprising. The focus of the field day was industrial hemp and it’s reasonable to assume self-identified farmers in attendance had at least some industrial hemp knowledge. Then coming out of the day’s programming a greater share of farmers reporting high knowledge provides some indication there was educational value to the day.

When it came to initially low knowledge ratings relative to biochar this was surprising. This is given the body of research uncovered during our initial literature review documenting biochar’s positive effects on crop yields; moreover, biochar is crop agnostic and applicable to many different feedstocks. Yet, recently reviewed articles suggest mixed results from biochar studies and even potentially harmful effects.

Another explanation could be the lack of research of biochar’s direct effects on industrial hemp. Under the assumption respondents self-selected themselves into the sample because this was a hemp-themed field day; their exposure to outside knowledge related to biochar’s purported benefits to hemp as a feedstock would be less than their peers.

On September 16, 2021 we held another field day at the hemp processing facility in Riverdale. This field day had two main topics: the uses of biochar and the prospects of industrial hemp. We had 50 attendees, primarily growers and dairymen. One of our biochar suppliers, Biochar Now, was present to give a presentation and talk about the uses of biochar and the different ways to make biochar. Principal Investigator Tony de Veyra also gave a short talk about the upcoming biochar experiment funded by Western SARE. We had tours of the field and of the processing facility.

9 Farmers reported changes in knowledge, attitudes, skills and/or awareness as a result of their participation

We collected the first set of soil samples in October. These were collected from the field before any amendments were added. These samples were sent to the Los Angeles Pierce College Horticulture Department for Testing. Due to a combination of weather and illnesses caused by the Coronavirus, we were unfortunately delayed by six weeks from our originally intended start dates.

We prepared our test plots and amended them with our six treatments on January 21st. After amending the plots with the experimental treatments, we planted our first cover crop of the experiment, a blend of Oats, Peas, Beans and Vetch on the entire field on January 22nd.

Due to delays in amending the plots and planting the first cover crop, we postponed our first webinar, which was originally planned for mid-February, to coincide with the maturation of the cover crop in mid-April.

Our first cover crop is growing well. We will collect a second set of leaf tissue samples from our cover crop in early-April and submit them to Ward Labs for testing. After getting those results, we will host our first webinar, which will go over soil and leaf data from the first cover crops and any observable differences between the treatment plots.

After the webinar, we will terminate the cover crop by mowing it. We will seed hemp into the stubble to initiate the first hemp planting for the experiment.

At this point in the project due to delays we’ve just begun to implement the project. We need to collect more data to modify our methodology. However, we will continue to observe the project closely and adjust our approach as needed. No till

However, recently discovered research runs contrary to our team’s understanding of biochar’s effects on soil health (Gale et al., 2016) . This element of doubt did not exist during our initial literature review which indicated overwhelming benefits to soil and plants. As the project continues to generate data we may test for the presence of heavy metals during soil testing should the budget allow. This is important because as this new strain of biochar literature exists this research has the potential to corroborate those findings.

Even further, as suggests, the conditions under which biochar is produced may be the key to avoiding detrimental effects to soil health (Yaashikaa et al., 2020). Should any negative effects be observed we’ll need to scrutinize the process of our biochar supplier.

Future data collection via planned surveys are going to hone in on respondent knowledge of industrial hemp and biochar. For example, the quality of sources respondents are obtaining their knowledge from. Is it by word of mouth or from online sources? Our initial pre-post assessment of educational programming can be improved by exploring these nuances. This is key to painting a clearer picture of our target demographic’s prior knowledge of industrial hemp and biochar.