Negative effects on environmental quality and human health can be minimized by harnessing natural pest control mechanisms. Natural systems limit 99% of agricultural pests and contribute $54billion - $1 trillion in global pest control services (Naylor and Ehrlich, 1997). Knowledge of natural systems that control arthropod pests can be used to develop strategies that take advantage of natural process that limit pests without the use of pesticides. One natural control of arthropod pests that is possibly undervalued and often overlooked are bats (order Chiroptera). Nearly two-thirds of bat species are voracious predators of arthropods. Many species are known to eat important agricultural pests worldwide (Kunz et al., 2011). One study estimates that bats provide 3.7 – 53 billion US dollars in agricultural pest control across the United States (Boyles et al., 2011) from the direct consumption of insect pests. Estimates of the ecological services provided by bats can be improved by understanding the diet of bats in various geographic regions and crop types.

Corn and Soybeans account for over 50% of cropland acres and 92% of insecticide use in the United States (Pimentel and Peshin, 2014).  However, not studies of diets using modern molecular techniques have examined the diet of bats in these areas. Understanding the diet of bats in this dominant agricultural system can improve estimates of the ecological services provided by bats and reduce pesticide use by informing ways to harness the services of bats. Therefore, we sought to:

We collected bat guano from bats captured near agricultural areas in Lancaster County, NE. We analyzed the insect species present in guano samples using metabarcoding techniques. We then evaluated the pest status and prevalence of observed insect genera to establish pest control potential of bats in the corn belt.

This research documents the agricultural pest diet found in bat diets. Specifically, those insect species that two generalist bat species consume throughout the mid to late growing season were determined.

Although outside the immediate scope of this grant, the ultimate motivation and desired outcome is farmers adopting Integrated Pest Management (e.g., decrease the use of pesticides, increasing bat habitat).  Bat consumption of insects results in increased yields, lower insecticide application and costs, increased profits, greater environmental quality, and improved health and quality of life. Additionally, the results of this study could guide further research.

We examined the diet of Big Brown (Eptesicus fuscus) and Red (Lasiurus borealis) in a typical agroecosystem of the United States Corn Belt. These species are two of the most abundant species in much of the Midwest United States and therefore the most likely to provided substantial ecological services to agriculture.

Fieldwork was conducted at two sites in Lancaster County Nebraska (Fig. 1). The Lancaster County (219,210 ha) landscape is dominated by row crop agriculture (56% of land area). Grassland, which is primarily used for haying, is the second most common land cover type (22%). Developed area in Lancaster county is concentrated around the city of Lincoln, NE and accounts for 13% of landcover (U.S. Geological Survey Gap Analysis Program, 2016).

Bats were captured June-September 2016 using mist nets systems 2.6-10.4 m high. All captured bats were identified, weighed, and measured. Bat capture and handling was conducted in accordance to guidelines of American Society of Mammologist (Sikes and Gannon, 2011) and in accordance with University of Nebraska IACUC protocol (Project 1556). Bats were kept in cloth bags for up to 1 hour to deposit guano samples and released on site. Fecal pellets were stored in silica and frozen at the end of each sampling night.

Custom taxonomy and trimmed reference sequence databases formatted for Qiime were imported into QIIME2 v2018.11 along with preprocessed FASTQ files from Geneious. Chimeric sequences were removed, and de novo clustered at 99% identity using vsearch (Rognes et al., 2016). We then used QIIME2’s feature-classifier plugin with the classify-consensus-blast to identify sequences against out custom reference database at 97% and 99% identify with minimum consensus threshold of 60% and 80%. These resulting feature tables were collapsed at the species level and exported in BIOM format for further analysis in R. We tested other analysis methods using DADA2 (Callahan et al., 2016) to denoise and remove chimeras, followed by clustering with vsearch, and using classify-sklearn to identify sequences.

We first examined the species composition of diets using heat trees (Citation). We developed a heat tree of subfamilies consumed, and individual heat trees for the 4 most dominate orders consumed. Additionally, we quantified the number of families, subfamilies, and genera in each sample. Finally, we classified each prey species as pest or non-pest and determined the number of pest subfamilies and genera present in each sample. Furthermore, we calculated the proportion of total reads attributable to pests and non-pests in each sample as a crude measure of relative abundance.

Table 1. Number of samples and reads from 4 most prominent prey orders of Red and Big Brown Bats in Lancaster county, NE

The order Coleoptera was present in all Big brown bat guano samples. The family Carabidae and pest subfamily Harpalinae were also present in every big brown bat sample. Lepidoteran and Hemipteran subfamilies were in most Big brown bat samples (Fig. 4A). Red bat diets most often contained species in the families Crambidae and Erebidae, both of which contain pest species. Tortricidae and Noctuidae were also consumed in over half of the samples (Fig. 5 A). The diversity of big brown bat lepedotra prey (Fig. 4B) was limited compared to the diversity of red bat lepidopteran prey (Fig. 5B).  Conversely, the big brown bat diet consisted of many coleopteran species (Fig. 4C), while red bat samples were less diverse and notably lacked the presence of the highly diverse and abundant carabid family (Fig. 5C). The Hemiptera order, particularly the pest containing subfamily Mirinae were also present in a large percentage of samples of both big brown (Fig. 4D) and red bats (Fig. 5D). Both Big brown and Red bats were documented to consume mosquitoes, most commonly of the Aedes genus (Fig. 4E; Fig. 5E).

While abundant in our samples, plant bugs (particularly the genus Lygus), are not considered and economically important pests of corn and soybeans Plant bugs can be abundant in soybean fields, and have been detrimental to seed quantity and quality in the lab, however abundance did not contribute to crop loss (Nagalingam, 2016). However, plant bugs can cause extensive damage to alfalfa seed crops.

Melanotus spp. (wireworm) were also preyed upon by both big brown and red bats with similar frequency (~20%, Fig. 3). Wireworm occurrence in agricultural settings is difficult to control as there are no rescue treatments and they are difficult to manage with seed-applied insecticides.

The consumption of Diabrotica spp. (corn rootworms) and Stenolophus spp. (seed corn beetle) is a notable pest control service by big brown bats. Corn rootworms are a major pest species across the Corn belt and are represented by 3 primary species, the western, northern, and southern corn rootworms. Corn modified to express bt toxins that prevent damage from these species are abundance; however, resistance to these modifications are increasingly being observed and bats may play an increasingly important role in the control of these species, especially since they are difficult to control with insecticides do their rapid ability to build resistance. The primary Diabrotica species in big brown bat diets was the southern corn rootworm (D. undecimpunctata), a late season pest of soybeans. The seed corn beetle is an important early season pest of corn plantings. While our study was only conducted in the mid-late growing season, it is likely that big brown bats consume this pest throughout the growing season. Late season consumption could contribute to lower overwintering populations.

Green clover worm (Hypena spp.)  was found in about half of red bat guano samples. While not a pervasive pest species, it is part of a defoliator complex of soybeans that can combine to cause extensive damage to crop yield and quality. It is believed that green clover worm populations are primarily controlled by parasites and disease – however the prevalence of the pest in red bat guano warrants examining if bat populations contribute to maintaining non-damaging populations.

Our work largely confirms previous studies that examined the diet of big brown and red bats. However, we are also able to document the presence of important agricultural pests in both big brown and red bat diets. Because we showed similar diets to other geographic areas, it is likely that the species level consumption we present is representative across much of the corn belt. Similarly pest control services may be similar across a larger geographic region.

Establishing the presence of pest species in bat diets is an important first step in understanding natural pest control services offered by this diverse taxon. This information can be used to address the uncertainty in the role that bats play in suppressing populations and thus the exact value of pest control services to agriculture. However, this uncertainty does not have to slow conservation efforts.

We have made an infographic to promote bats as agricultural pest control agents in Nebraska. 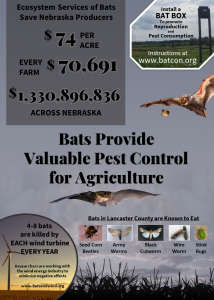 We are in the processes of submitting a journal article of our results.

We wrote a popular news article about the role of bats in agricultural pest control for the Lincoln Journal Star.

We presented at multiple public events for conservation groups on the bat research we are conducting at the University. We also participated in two state park bio-blitz events where we captured bats and told participants about the agricultural benefits they provide.

These strategies likely reached agricultural professionals and farmers/ranchers, however, we did not ask if participants fell into these categories.

Our work largely confirms previous studies that examined the diet of big brown and red bats. However, we are also able to document the presence of important agricultural pests in both big brown and red bat diets. Because we showed similar diets to other geographic areas, it is likely that the species level consumption we present is representative across much of the corn belt. Consequentially, pest control services may be similar across a large geographic region.

Establishing the presence of pest species in bat diets is an important first step in understanding natural pest control services offered by this diverse taxon. This information can be used to address the uncertainty in the role that bats play in suppressing populations and thus the exact value of pest control services to agriculture. However, this uncertainty does not have to slow conservation efforts.

Through reading for this project, I gained considerable knowledge about the economics of pest control in sustainable agriculture.

Additionally, I became more knowledgeable about the role bats can play in limiting agricultural pests. I was surprised that certain common pest species were not present in our samples. However, a detailed look at pest life cycles and conversations with agricultural pest specialist allowed me to understand why these pests were absent (often a disjunct between seasonality of pest flight and bat activity).