One of the most valuable fruit crops in the USA, apple, is attacked by many pests. The apple maggot fly (AMF), Rhagoletis pomonella (Diptera: Tephritidae) is endemic to eastern North America from Canada via the USA to Mexico (CABI, 2019), and is considered as one of the key insect pests in the Northeast. The pupae (soil-dwelling stage) overwinter under the top 5 cm of soil beneath the apple trees and emerge as a new generation of univoltine adults in late spring. To control R. pomonella, growers typically apply up to three broad-spectrum insecticide sprays to the entire orchard. Foliar sprays target the adult stage. No management options are currently available to kill larvae and pupae of R. pomonella in the soil. Entomopathogenic nematodes (EPNs) have been evaluated as biological agents against many pests. For R. pomonella two EPNs species, Steinernema carpocapsae and Steinernema riobrave, showed promising results and effective candidates under laboratory conditions. The field evaluation results indicated that S. riobrave, as high dose, (= 200 Infective Juveniles (= IJs) per cm2 proved to suppress the immature stages of R. pomonella in the field during fall and winter. Hence, growers would have another integrated pest management (IPM) tool, leading to reductions in insecticide use against R. pomonella supporting more sustainable apple production.

The research objective of this project was two-fold:

Field study: Evaluated the virulence of S. riobrave (high = 200 Infective Juveniles (= IJs) per cm2) against R. pomonella pupae in four commercial apple orchards. The previous research by Pinero et al. 2019 with plum curculio (another apple key pest) proved that these two nematodes are highly effective to plum curculio in the apple orchard condition. Therefore, if these two nematodes show to be highly effective for apple maggot fly larvae and pupae, we kill ‘two birds with one stone.

The purpose of my project was to evaluate two promising entomopathogenic nematode (EPNs) species to control larvae and pupae of the apple maggot fly, Rhagoletis pomonella (Diptera: Tephritidae), potentially leading to more sustainable management of this key apple pest. If successful, then growers could reduce insecticide use against R. pomonella because they will have a low-cost biological control tool that is not currently available to control this pest.

Apple is one of the most valuable fruit crops in the USA. In fact, the most recent data in the US value of utilized non-citrus production apple place in the second in the nation with 4.94 billion tones just after grape (USDA NASS, 2019). In New England, Massachusetts ranked first with an average value of utilized production of approximately 31 million /year (USDA NASS, 2019). In eastern North America, apple maggot fly, Rhagoletis pomonella, has been ranked as a key pest of apple. If left uncontrolled, it brings economic damage at about 30-70% or even 91% out of total production (Prokopy et al. 2003). To maintain AMF populations below economic damage, apple growers depend on applying broad-spectrum chemical pesticides to the entire orchard. Inevitably, it negatively impacts the biological community such as beneficial arthropods, including many species of predators and parasitoids that suppress several pests, as well as wild pollinators such as bees and syrphid flies in the orchard ecosystem. Pesticides also influence the functioning of agricultural soils, while their leaching to the surface produces a threat for the provision of the water resource and for the functioning of aquatic systems (Putten et al. 2006).

For many years, apple growers in Massachusetts and other New England states have supported apple IPM. They are likely to adopt ecologically-based IPM tools and strategies if those options are economically feasible and effective. However, in recent years the bulk of research and extension efforts related to fruit pest management has focused on evaluating newer chemistries that could replace the use of broad-spectrum insecticides, and research aimed at developing alternative IPM methods for arthropod pest has decreased substantially. I believe research in the area of biological control of apple pests is needed. A survey of 88 commercial apple growers from Massachusetts and Rhode Island was implemented by Dr. J. C. Piñero (project advisor) in mid-April 2018. Survey results revealed that for 32% of the growers AMF is the most damaging pests in apple orchards. Most growers indicated that more IPM-oriented research is needed.

EPNs: The EPN S. riobrave (355 strain) was shipped overnight from the USDA ARS Southeastern Fruit and Tree Nut Research Laboratory in Byron, GA, to UMass Amherst for the field study.

Sources of apple maggot fly: Wild populations were collected originally from field-infested (unsprayed sections) of UMass and Amherst where abandoned apple trees  exist. To get R. pomonella pupae for the experiment, infested fruit was placed in groups of 35 each on top of a wire screen (0.5 x 0.5x m) 5 cm above a 2.5-cm thickness of moist sand, the pupation medium stayed there until developing larvae had formed puparia. The laboratory population (Fig. 1) was provided by the USDA ARS Appalachian Fruit Research Station in Kearneysville, WV.

Laboratory experiments: Two different experimental groups were structured. In the first one (A), the wild population of R. pomonella pupae (as univoltine) had exposure to different dosages of S. carpocapsae and S. riobrave (high dose = 200 Infective Juveniles (= IJs) per cm2, and low dose = 50 IJs per cm2) alone and in combination. The soil source was collected from autoclaved soil under standard conditions for this exposure. Control had no exposure to EPNs but was associated with water.

In the second group (B), EPNs dosage was similar while R. pomonella pupa population and soil type altered, so that the laboratory population of R. pomonella (multivoltine) was exposed to EPNs. The soil was applied from the University of Massachusetts Cold Spring Orchard Research & Education Center, where EPNs were applied to the soil against plum curculio in July 2020. The Control group had no exposure to EPNs and was associated with water. 840 R. pomonella pupae were exposed to EPNs in transparent plastic containers under ambient conditions for both groups. Four replications for each dosage were conducted. All samples were observed during the first 72 hours to record the infestation rate. All samples were kept under ambient conditions to emerge R. pomonella and record the mortality data (Fig. 1).

Field experiments: This research was conducted at four different commercial apple orchards in Massachusetts (Red apple orchard in Phillipston, Sentinel farm in Belchertown, University of Massachusetts Cold Spring Orchard Research & Education Center in Belchertown, and Small Ones farm in Amherst). I used a powerful lure (AMF blend) to attract R. pomonella to specific trees. Those trees were not sprayed with insecticides leading to more significant fruit infestation by wild R. pomonella. In September 2020, two areas were marked under each apple tree canopy. Each area (1m2) received 35 wild R. pomonella pupae, which were placed on the top 5 cm of the soil. Then one of the blocks received a high dose of S. riobrave (200 IJ cm2) and the second block just received water as a control. Sixteen experimental units were created across all four orchards. In December 2020, we returned to the blocks to collect all pupae to transfer under laboratory conditions to record R. pomonella adult emergence (Fig. 2). 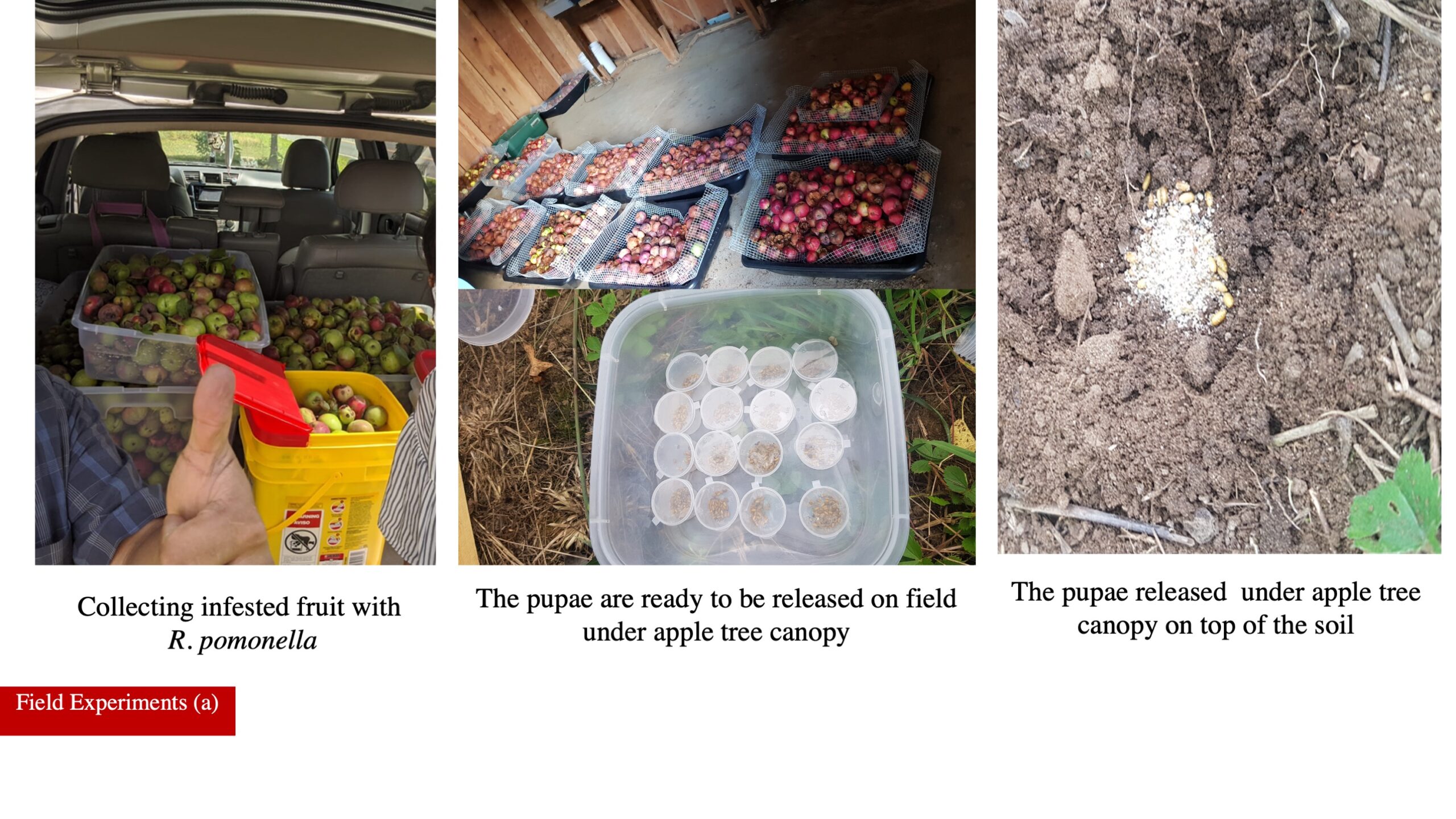 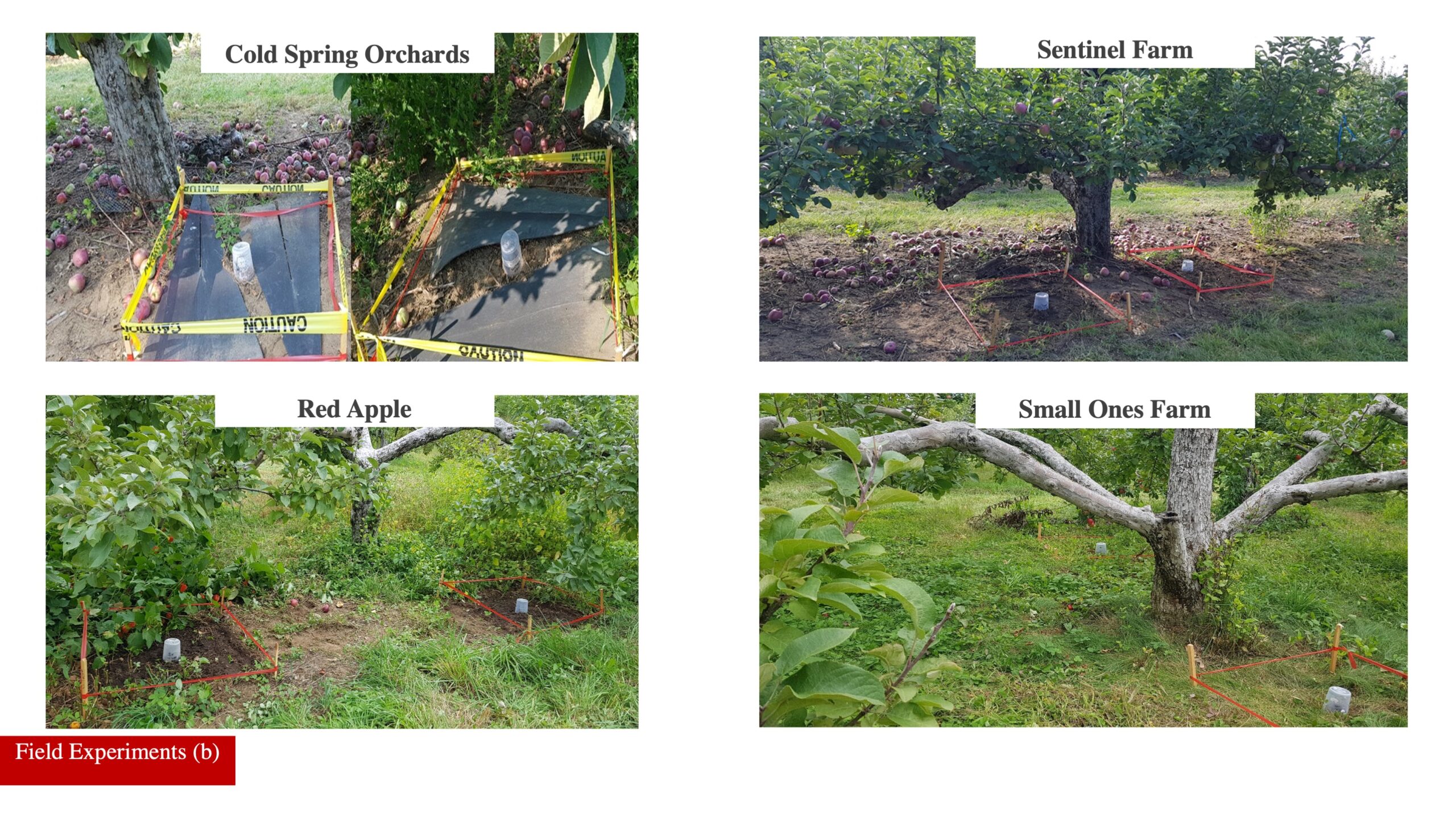 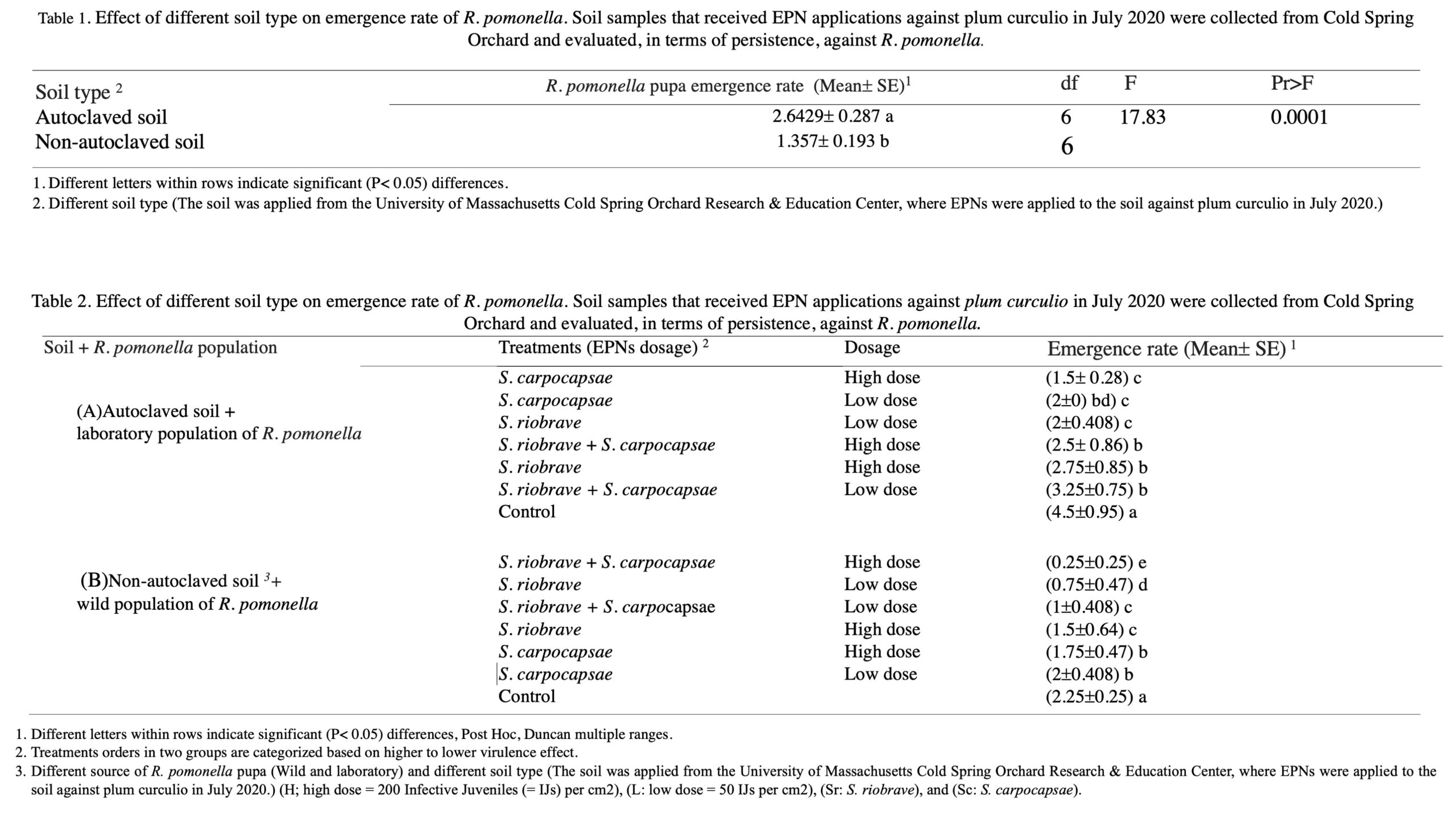 Appraising suppression emergence rate based on the interaction effect of soil type and different EPN application dosages, indicated that the combination of two EPNs as (S. carpocapsae+ S. riobrave) in a high dose in the soil showed the highest suppression of R. pomonella pupae (0.25± 0.25) while control treatment in autoclaved soil showed the lowest suppression power (4.5± 0.95) (F= 3.53; df=13; P< 0.0009) (Table 3). 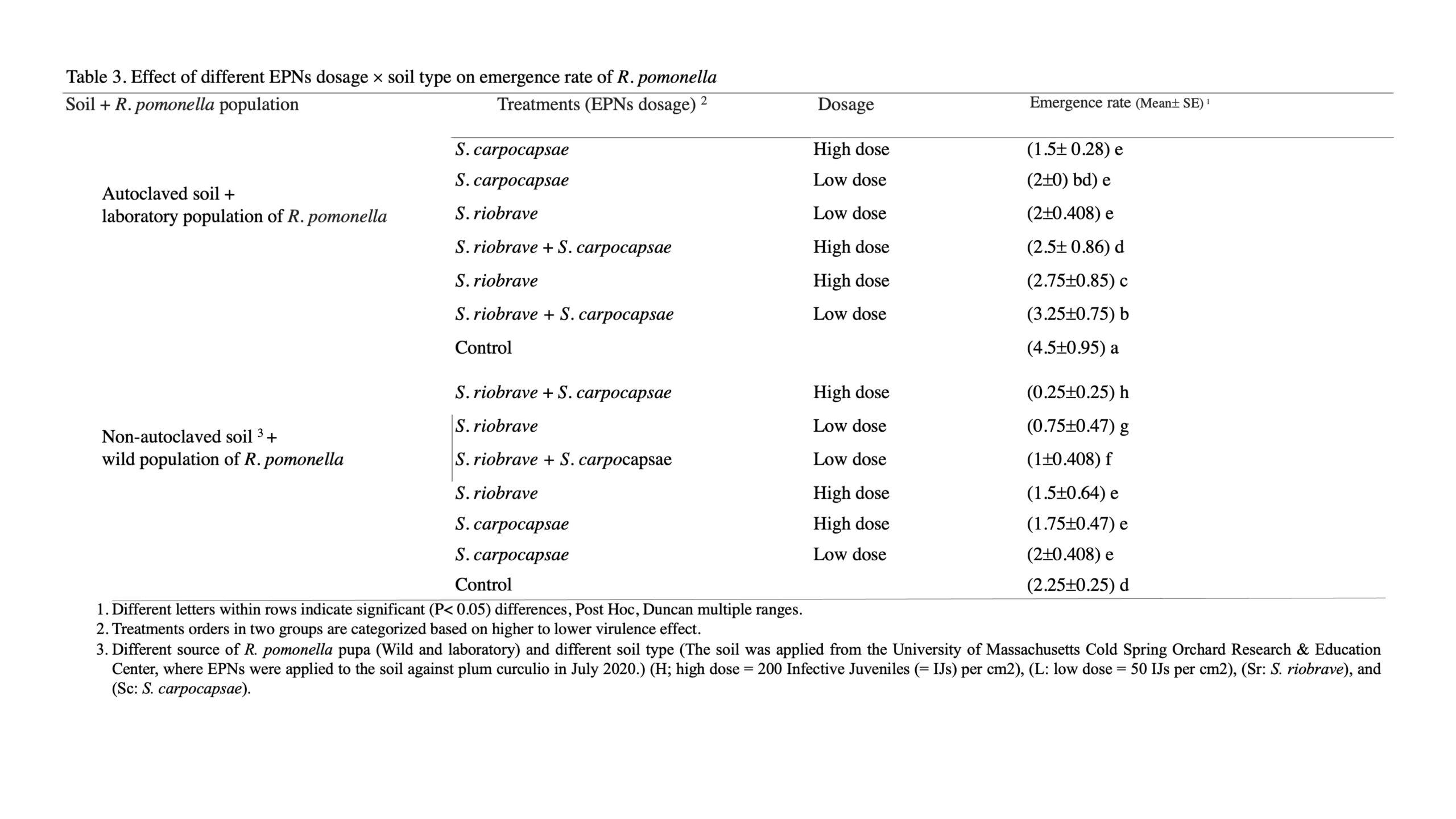 Results of the fall application of fly pupae and the EPN S. riobrave under field conditions demonstrated that R. pomonella pupa emergence rate was significantly reduced in the blocks where there was the application of S. riobrave high dose (t = −2.72; df = 14; P = 0.017) (Fig. 4A). This confirms that S. riobrave can markedly reduce the survival rate of R. pomonella pupae to emerge as adults during late fall, under colder soil conditions as those experienced in the summer (Fig. 4B).

Additional data: During our procedure, we found out that there was a fungal infection in some pupae. We went for further fungal culture and diagnostic steps including the histology procedures and Koch’s postulates. As a result, we discovered that Fusarium sp. could penetrate through the pupal cuticle and be responsible for the mortality of some pupae. (Fig. 7)

This research is the first report about the efficiency of entomopathogenic nematode against the soil-dwelling state of R. pomonella under field conditions. Our study indicated that:

a) High dose of entomopathogenic nematode S. riobrave (200 IJ/cm2), as a biological control agent, could suppress significantly the soil-dowelling stage of R. pomonella under field conditions, especially during the fall seasons. In other words, the application of S. riobrave on the orchards can reduce the survival rate of apple maggot fly pupa in the soil.

b) Our laboratory research showed that the suppression effect was higher in the non-autoclaved soil where EPNs were applied to the soil against plum curculio in July 2020.

d) Primarily data revealed that Fusarium. sp had a deteriorating effect on the emergence rate of R. pomonella pupa.

The product of this project included online participation in the Soil Health Innovation Conference (March 2021) with video and poster presentation which leads to achieving second place in the competition section. The prepared video has been observed by at least 150 national growers and researchers. Moreover, one extension document was published on a fruit note article.

This study satisfied critical needs regarding control of soil-dwelling stages of apple maggot pupae in apple orchards which in turn can bring promising outcomes for biological pest control via entomopathogenic nematodes, as an ecological friendly agent, to reduce the amount of pesticide and bring more sustainability. For instance, by applying less pesticides there could be improved soil microbial community and less pesticide residue in fruit products.

This study determined that the application of S. riobrave under apple trees where most pupae overwintered could significantly suppress the adults' emergence rate. Moreover, fall evaluation indicated that this biological control agent could be persistent and active on the soil during the fall and winter. Specific knowledge gained in the laboratory included insight to use the optimum dosage of EPNs, predation rate, persistence, and activity of these nematodes as evaluated using soil collected from Cold Spring Orchard after receiving EPN applications in July 2020. This described that S. riobrave and S. carpocapsea can be persistent on the soil under an apple tree canopy, and their survival will not diminish via harsh winter. This field research was done for the first time against a soil-dowelling stage of apple maggot pupa emergence rate and provided a valuable turning point to develop functionally integrated systems.

Through the execution of this research project, my advisor and I learned about the performance and potential use of entomopathogenic nematodes (EPNs) as biological control agents of a key apple pest. Specific information was not available about whether EPNs were able to (1) attack the pupal stage of the insect, in the soil (we got positive results) and (2) whether EPNs applied in the fall, under colder conditions, would be able to kill the pest (positive results).

In addition, knowledge was gained when via experimentation, I discovered that one species of Fusarium (a fungus) was able to kill apple maggot pupae. This is important because we now understand that various types of organisms (EPNs, fungi) can kill the pest in the soil.