This project addressed knowledge gaps for management of Chrysobothris mali (Horn), Pacific flatheaded borer, (PFB; Coleoptera: Buprestidae) in Oregon hazelnuts. This native pest is particularly damaging in new plantings of tree crops, and recent expansion of hazelnut acreage in Oregon has resulted in major economic impacts. Very little research has been conducted on this pest. Typically, young hazelnut trees (1-2 year old) are targeted for oviposition by the adult females beetles. Literature suggests that PFB are attracted to stress signals emitted by establishing trees (Burke 1929). Female borers find vulnerabilities in the bark to lay their eggs. After hatching form the egg, larvae create galleries in the cambium beneath the bark, typically near the soil line. They may live in the galleries for one or two seasons. The tunneling can result in girdling the of tree.   Trees that survive initial attacks can be severely weakened, risking trunk failure due to wind or nut load. Inadequate knowledge of PFB has resulted in devastating losses of young trees for some growers. The goal of our project was to increase understanding of phenology of PFB and help develop effective management strategies to increase sustainability of the hazelnut industry. Our project had 3 objectives.

We were successful in developing phenological data describing the flight period of PFB, which we feel is broadly applicable to western Oregon and can be used to predict when trees will be most susceptible to borer attack. The monitoring strategies we evaluated were relatively unsuccessful, which is similar to past efforts to monitor Chrysobothris spp. with traps. More research is needed to evaluate the effect of trap type, color and potential use of volatile attractants.  We were successful in evaluating plant protection strategies and much of the information generated has been incorporated into published plant protection guidelines for hazelnut growers. We were also able to disseminate results through a workshop, on-farm visits, and through presentations, flyers and other means.

Our objectives were designed to provide the most relevant information for management of PFB in young hazelnut orchards. We prioritized research on borer biology and phenology, monitoring, and plant protection. The research formed the basis for Extension resources provided to the industry and a basis for future research projects.

We collected trees infested with PFB from collaborating grower orchards during the fall and winter. We considered trees to be infested if they showed signs of sawdust frass or girdling of the trunk, typical characteristics of PFB damage. We remove canopies and roots because borer larvae are typically found close to the soil line or in the lower 24 inches of the trunk. Each end of the trunk is capped with paraffin wax to prevent desiccation and borer mortality. We store infested wood in five-gallon buckets, arranged by grower field, with small holes drilled in the bottom of buckets for rain drainage. Buckets are labeled with location and date collected and individually covered with mesh to prevent borer escape. They are stored outside in field cages at North Willamette Research and Extension Center in Aurora, OR. Data loggers recording temperature and humidity are stored with the wood. In the spring, we begin dissecting a subset of borer sticks to monitor transition from overwintering larvae to pupae and finally adults, then we begin checking for borer emergence twice a week and continue through August. We count and record each emerged borer. At the end of August, we calculate the percent of PFB emergence throughout the season.

We placed the traps along the borders of the orchard separated by 50 feet to limit influence of other traps. Each multifunnel trap was coated with fluon (a water and polytetrafluoroethylene (PTFE)-based liquid), to make the surface of the trap slippery and prevent insect escape. Multifunnel traps coated with fluon caught significantly more EAB than untreated traps (Francese et al. 2013). We hung each trap from a post right next to a tree. We wrapped sticky cards around the trunks of the trees. Traps were monitored weekly through August. Each PFB caught was recorded.

The project team planted weak hazelnut tree whips, or slender and unbranched shoots, into two plots in early spring of 2018 ans 2019. Our preliminary research has shown that planting trees late after dormancy and bud break is an effective way to induce attack by PFB. We've established one plot at North Willamette Research and Extension Center and a second plot near a collaborating grower's orchard in Newberg, OR. Each plot consisted of four replications, 10 treatments and a control per replication, and five trees per treatment totaling 220 trees. We randomized the treatments in each replication. Treatments varied in ingredient, rate, timing and application. We painted the trunks of trees except the untreated control with white latex paint, a common practice for newly planted trees to prevent sunburn. We gave minimal water to trees to induce stress. Timing of chemical applications were based on the adult emergence we found in our field cages. Spray applications were applied using a spray gun fitted with a solid cone diffuser and D8 nozzle attached to a hose reel. An air compressor (Rigid 4.5 gal. air compressor) powered by a gas generator (Ryobi 2,300-watt) was used to achieve the adequate pressure of 40 psi. We assessed borer damage in the fall/winter of 2018 to 2019. The presence of galleries, tunneling caused by the borer, was recorded.

We saw consistent results of PFB emergence from infested wood collected from grower orchards over a three-year period. As the graph illustrates, emergence of PFB was recorded from late May through early August. Consistent emergence results help growers and managers better understand the period where knowledge of when PFB are active and thus they can plan their management actions accordingly. Unfortunately, emergence of PFB from wood in 2020 was very limited and did not contribute new data to the phenology curves already generated. 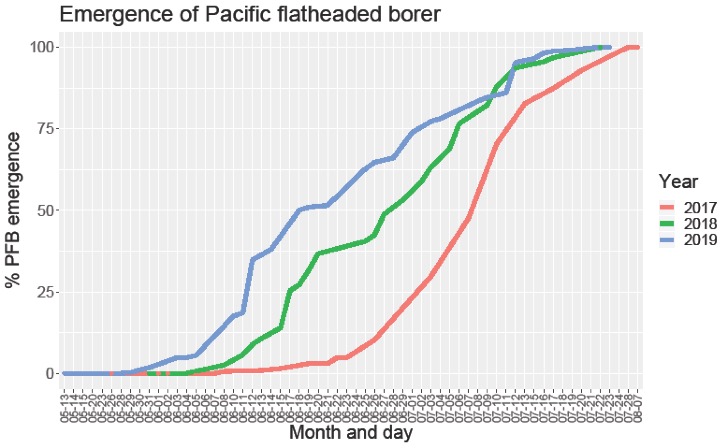 Season-long monitoring at two cooperator sites in 2019 resulted in just two captures of PFB. No PFB were recorded on the sticky card traps that were wrapped around the trunks of the trees. The only captures were on the Lingren funnel traps. It was unclear if volatile lures played any kind of role as unbaited Lindgren funnels worked as well as baited traps. New attractant and trap combinations are needed to develop an efficient monitoring approach. It is unclear if a few number of PFB females are responsible for the damage in orchards, in which case we may not expect to capture many adult PFB.

Many growers apply the systemic insecticide imidacloprid, or another neonicotinoid, against PFB. While neonicotinoid insecticides have been implicated in pollinator declines around the world, hazelnuts are wind-pollinated and not attractive to bees other than for pollen in winter. We regard these materials as safe to use on hazelnuts and much preferable to trunk sprays of chlorpyrifos or pyrethroid materials. In 2019 we saw that neonicotinoids are very effective in preventing attack by PFB, particularly imidacloprid and clothianadin. We also evaluated a numbered compound from the diamide class of insecticides in 2019. The diamides are largely regards as softer, more targeted insecticides and this result gave us excitement that diamides could represent a more sustainable alternative to neonicotinoids. In 2020, we tested three diamide materials (cyantraniliprole, cyclaniliprole, and chlorantraniliprole) and found that they indeed show promise as systemic plant protectants against PFB. Many treatments were made as single vs. multiple applications and typically there was little additional control provided by increased number of applications. We also found that a mixture of white latex paint and kaolin clay painted onto trunks was equally effective as insecticides in preventing attack by PFB. Similarly, plastic trunk guards seemed to help reduce damage by PFB. The product Actigard also reduced PFB infestation, which is interesting as this compound is reported to increase plant resistance to pests and disease.

Curricula, factsheets or educational tools: these examples give an overview of the issues we're facing with Pacific flatheaded borer and the research we're conducting to mitigate its impact.