An 88% increase in the demand of ruminant meat as a result of changing diets and a projected world population of 9 billion humans (Searchinger et al. 2014), is a direct call to ranchers. This challenge is amplified two-fold because 1) non-native plant invasion decreases rangeland productivity and 2) control is expensive- land owners in Montana spend $4,583 annually controlling non-natives on the average grazing unit (Mangold et al. 2018). Alarmingly, the aggressive non-native annual, cheatgrass, is spreading in south-western Montana. We must create effective management solutions against this plant.

We aim to answer the following: 1) Do non-native plants alter nutrients? and 2) Does a novel seed mix out perform a traditional one?  To answer these questions herbicide (imazapic) will be applied to control cheatgrass in the fall, and restoration seeding in the spring at six sites in the Centennial Valley, MT. The site-specific seed mix composition will be informed by site characteristics and soil nutrients as part of a  greenhouse trial, prior to seeding in the field. 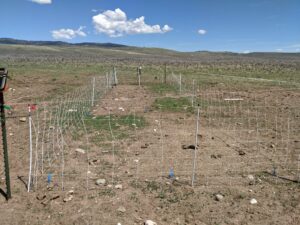 Four high-use livestock water tanks located in the north-central and north-eastern portion of the Centennial Valley, MT were selected as a result of scouting by United States Wildlife Service (USFWS) crews. The level of bare ground, B. tectorum and native grasses, were used as metrics to curate a sense of: 1) degree of invasion by B. tectorum and 2) use by cattle (bare ground). Based on this information, site visits by Drs. Rew, Cutting, and I, selected four sites that were found to be most similar in terms of use by cattle, B.tectorum abundance, and site characteristics (elevation, aspect, etc.).

Our first objective was to apply a pre-emergent herbicide in the form of imazapic at 6oz/ai/ac to control B. tectorum in the fall of 2020, at each of the four water tanks. Additionally, soil was collected from each of the sites for analysis of pH and texture, and soil temperature and water probes were deployed with Hobo data logger stations.

These mixes were assessed in pots, at a density that imposed intra and inter specific competition: 24 plants per pot for my experiment. The seed mix trial was split into three treatments: 1) competition between species within the same mixture, 2) intraspecific and 3) competition of each mixture with cheatgrass.

To quantify the competitive effects of each combination, the height of each species was recorded over the course of the experiment (2 months), and terminal biomass (dry weight) was harvested, and recorded for each species.

The following spring (2021), crews returned to the water tanks to construct grazing exclosures which would allow us to account for the potential impacts of high disturbance from cattle trampling on seed mix establishment. This provided us with grazed and un-grazed exclosures measuring 40.5m2, within each of these treatments six, 6.75m2, rectangles were marked out, half of which received an herbicide application of the fall prior, and the other half did not. Within each of these smaller rectangles, three 1.5m2 squares were established and received a seeding treatment of: traditional seed mix, novel seed mix, or no seed mix. This study design allowed us to monitor both the establishment of the seed mixes and the control efficacy of the herbicide on B. tectorum. For each of the grazed plots centimeter accuracy GPS locations were taken to ensure we could re-visit plots if flagging/road-hairs were pulled by cattle or other ungulates over the course of the season.

Vegetation monitoring of 1-meter squared sampling plots within each of the treatments, will include each species, and its cover, the amount of bare ground, rock, and litter (non-living organic matter), and began in July 2021. These metrics of vegetation monitoring allow for both species richness and diversity to be analyzed.

These plots were sprayed in the fall of 2020, and seeding occurred in spring of 2021, because of this the strong treatment effect of herbicide compared to seeding, on B. tectorum cover is un-surprising. The greenhouse study results (Figures 1-3) suggest that if able to establish, the novel seed mix may have a greater suppressive effect on B. tectorum compared to the traditional mix.

Gave an on-site presentation about non-native plant ecology and restoration practices/research in the Centennial Valley, to a Montana State University Yellowstone Ecology class (15 participants) in conjunction with United States Fish and Wildlife Service biologist Dr. Kyle Cutting. We discussed the implications of non-native plant control, the goals of restoration, and the balance between active management, science, and ranching.