Weed management represents a major barrier to sustainable production of both field and vegetable crops in the NC region.  Conventional growers face increasing pressures to reduce herbicide use and address herbicide resistance. Organic farmers often rely on expensive hand-weeding that reduces profitability.  Advances in material science and engineering have resulted in new tools and techniques for physical weed control (PWC) that can help address these constraints and simultaneously improve profitability and environmental health in the NC region.  These tools have begun to hit the market, but growers need guidance on which tools to purchase and how best to integrate them into their cropping systems.  The primary goal of this proposal was to foster partnerships between growers and researchers in the North Central (NC) region to improve understanding and adoption of efficient, low cost PWC tools.  To achieve this goal our project objectives included: 1) broadening understanding of new PWC tools and techniques through conference participation, farm-tours, and on-farm testing; 2) sharing existing knowledge of state of the art PWC equipment and techniques through a one-day workshop; and 3) developing videos and factsheets to summarize and disseminate innovations to a broad grower audience. A team of farmers and university researchers travelled together to Switzerland in April 2017 to document innovations in PWC from both farmers and manufacturers.  During the 2017 growing season, tools and techniques from Europe were tested on-farm, and demonstrated at the full day "Midwest Mechanical Weed Control Field Day".  Video footage from these activities was compiled to produce three 20 minute videos focusing on in-row mechanical cultivation with finger weeders, torsion weeders and flextine cultivators.  Our work has identified and demonstrated best practices for these tools and has provided North Central farmers with important tools and techniques for improving the efficiency of their weed management.  The farm-industry-research network developed through this project has gained strength and additional funding through various sources to continue building on the work initiated with this project.  We anticipate that adoption of these innovations will improve profitability and quality of life for many growers in the region.

Our project objectives included: 1) broadening understanding of new PWC tools and techniques through conference participation, farm-tours, and on-farm testing; 2) sharing existing knowledge of state of the art PWC equipment and techniques through a one-day workshop; and 3) developing videos and factsheets to summarize and disseminate innovations to a broad grower audience.

Objective 1a.  European information gathering tour.  To broaden knowledge of new Physical Weed Control (PWC) tools and techniques, we traveled with a team of 4 North Central farmers, 2 graduate students and 1 professor (SARE funding paid for 3 of the farmers to join the group which also had funding from other sources) to collect information from growers, researchers and manufacturers in Switzerland, France, Germany and Holland in April 2017.  The trip began with a conference and farm tour sponsored by the “Physical and Cultural Weed Control Working Group” of the European Weed Research Society.  This conference is held every 2-3 years and brings together experts in PWC from around the world to share innovative new tools and techniques (see: http://www.ewrs.org/pwc/ for conference proceedings which included 2 presentations from our group). In addition to the conference-sponsored farm tours, we visited innovative farmers in Switzerland and Holland, including Rathgeb’s Bioprodukte and Tuinderij De Stroom.  We also visit Wageningen Univeristy, a global leader in PWC research and several manufacturers including Stekete and Hak Schoffeltechniek.  During this tour we collected video footage of various tools in action, and interviews of farmers and manufacturers describing the best use of these tools. 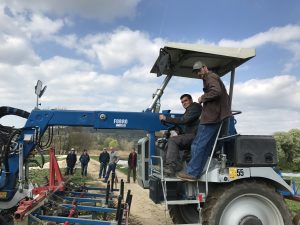 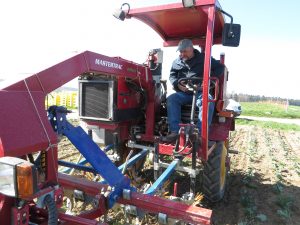 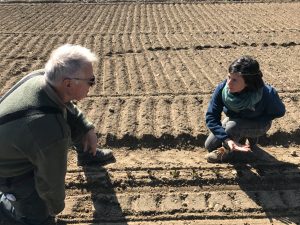 Objective 1b.  Testing tools.  To promote adaptation and adoption of European PWC tools in the NC region, our farmer collaborators selected and adapted tools identified during our research trip, and tested and documented their use on-farm during the 2017 growing season. Two growers (Les Roggenbuck and Sarah Geurkink, MI) selected finger weeders for management of in-row weeds in various vegetable crops.  They tried different finger diameters, durometer (hardnesses) and mounting systems (direct to tool bar; parallel linkage; telescoping linkage), belly mounted to their existing cultivating tractors.  One farmer (Paul Huber, Wisconsin), selected torsion weeders which he adapted to his walk-behind tractor for use on his small scale diversified farm.  Growers videotaped the tools in action, and evaluated their impact on weeds.  In addition, we evaluated these tools as part of MS projects of the two graduate students who participated in the project (Sam Hitchcock Tilton and Marisa Benzle).  Detailed evaluations included tools used alone, or in various combinations in carrots and winter squash.  Pre- and post- cultivation weed counts were used to evaluate efficacy of the tools on weeds, and crop mortality. 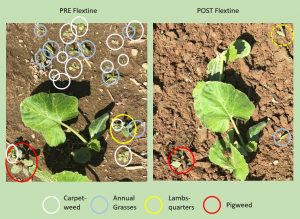 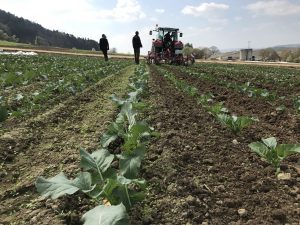 Objective 3.  To disseminate information gathered in Objectives 1 and 2 to a broader grower audience, we produced three 20 minute videos highlighting our experiences with three different "in-row" tools: the finger weeder; torsion weeder and flextine cultivator.  Video footage from Europe, on-farm testing, and the field day was integrated into these videos with assistance from a professional videographer and graduate student Marisa Benzle, who has a degree in video production.

Grower participants were unanimously enthusiastic about the information-gathering trip and have continued to build on the knowledge gained from the experience.  Their opinions about specific tools are documented in our video series.  In general, most growers were especially interested in the finger weeder and flextine weeders, with less success and interest in the torsion weeder.  The consensus from both on-farm and research-farm trials was that the finger weeder and flextine weeders are versatile tools that work well on a wide range of transplanted and large-seeded direct-seeded crops.  Although the torsion weeder can also work extremely well under the right conditions, it is more difficult to calibrate and integrate into diverse farming systems, and works well under a narrower set of soil and environmental conditions.  Our work highlighted for growers the importance of field preparation, and integration of tools into a broader weed management system including both preventive approaches, and systematic strategies for maintaining a size difference between crops and weeds.  We also learned that success with these tools depends critically on appropriate mounting systems, steering systems and calibration.  Another important theme that emerged from our information-gathering and formal testing was the potential importance of combining tools with different modes of action.  For example, in-row tools often performed best when combined with appropriate near-row tools (e.g. knives, cut-away disks or rolling cultivators) run in front of them.  In some cases, we also found synergies when "stacking" several in-row tools (e.g. finger weeder + mini hilling disks). For example, when tested in snap beans, the finger + flextine cultivator killed a larger fraction of weeds than either tool used alone (see figure below). 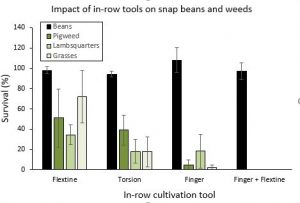 The largest outreach/demonstration event held as part of this project was the "Midwest Mechanical Weed Control Field Day" held at the Horticulture Teaching and Research Center (HTRC) in Holt, MI on September 2017.  This event attracted approximately 140 participants including approximately 100 farmers from throughout the North Central Region.  This full day event included: 1) a presentation by key-note speaker Jean-Paul Courtens on his farm's approach to mechanical cultivation on his organic vegetable farm; 2) displays of mechanical cultivation tools, tractors and mounting systems from a range of manufacturers; and 3) field demonstrations of multiple tools including presentations from our participating farmers (Les Rogenbuck, Paul Huber and Sarah Geurkink), manufacturers, and researchers. 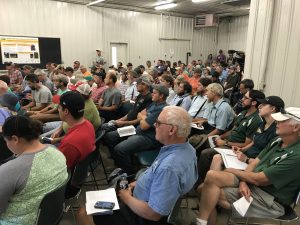 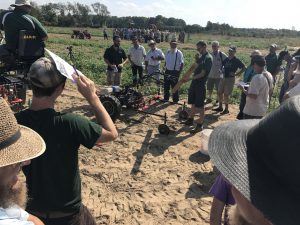 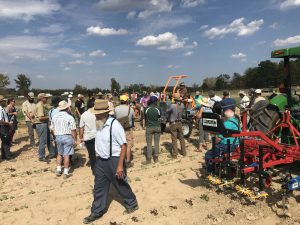 See web links related to this event at:

Other demonstrations and workshops were conducted with groups of growers at the North Willamette Research Station (Oregon), and at MSU Student Organic Farm.

During the summer of 2017 and 2018, we also visited growers in MI, IL and WI to discuss new tools, techniques and adjustments to improve the performance of mechanical cultivation tools on farm. 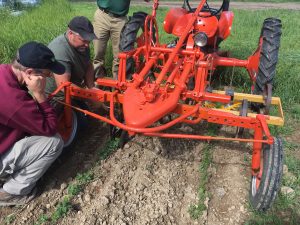 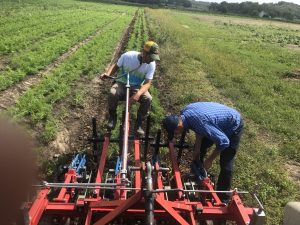 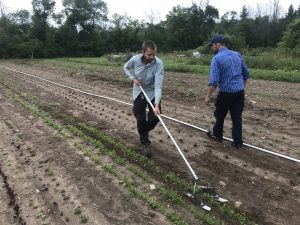 75 Farmers reported changes in knowledge, attitudes, skills and/or awareness as a result of their participation
Key changes:

Short Term outcomes have included 1) Increased awareness of new cultivation tools and their optimal use; 2) improved understanding of the potential economic impact of different tools relative to their cost in the context of NC cropping systems of different scales; and 3) acquisition of new skills (e.g. proper tool selection given crop-weed and soil conditions; proper steps for calibrating to optimize tool selectivity). Evaluation of these short term outcomes were conducted both through participant observation and an evaluation forms at our field days.

The most concrete evidence of these outcomes, came from our survey at the Midwest Mechanical Cultivation Field Day.  Among the 140 participants, we received 73 evaluation forms.  Average responses to two key questions are provided below:

Overall ranking of the event on a scale of 0-5 (0=terrible; 5=fantastic)

In the medium term we anticipate that new grower knowledge and skills will result in: 1) increased adoption of new cultivation tools and techniques; 2) reductions in weed management (labor and herbicide) costs; 3) reductions in yield losses due to weeds; and 4) increased farm profits.  These medium term outcomes will be evaluated through participant observation and phone surveys with grower participants following the 2018 field season.

Evidence of the likelihood of ongoing impact of our work:  Our field day was used as a model for two successful grants that supported similar field days in 2018:

In addition, information generated through this project was integrated into a successful large grant to the USDA-OREI program, which builds on many of the themes explored in this project.  This new project is briefly summarized here:

Anticipated long term impacts include improvements in environmental quality (due to reduced herbicide use and cultivation frequency), and strengthening of rural communities (through improved profitability and reduced barriers to entry for new farmers).  Evaluation of these long-term impacts is beyond the scope of this project.