Organic grain production is overly reliant upon soil disturbance and hand labor for weed control, undermining soil health and social justice benefits of organic agriculture. Our group of five organic grain growers currently practices rotational no-till, but wants to take advantage of residue management innovations to disturb even less soil. Over a two year period, on five Midwest organic farms (3 IL, 2 IN), we will evaluate the economic, environmental and labor performance of two organic grain production systems that maintain continuous living cover with different soil disturbance regimes. Both will follow a wheat-corn-soybean-fallow crop rotation. System 1, rotational no-till, will use primary tillage in the wheat and corn phases, but no-till plant soybean into crimped rye. System 2, nearly continuous no-till, will establish a white clover living mulch in wheat, seed fall-tilled strips in the clover with tillage radish for winterkill prior to no-till planting in the corn phase, and no-till soybean into crimped rye. Both systems will have a fallow phase with cool and warm season cover crops, to build soil and eliminate volunteer rye. We will conduct outreach through the IDEA Farm Network site both in real time, and at field days and annual meetings.

2019 was our first year to test our no till living cover system. Everyone was successful in raising a no till soybean and small grain crop. Volunteer cereal rye was a problem in both wheat and soybeans. It posed a marketing issue because the rye grain was difficult to separate from soybeans and impossible to separate from wheat. This was not an issued in the tilled fields. Every farm had a total loss in the corn phase of the living cover. The white clover was extremely competitive against the young corn seedlings, especially for moisture. The summer of 2019 was extremely dry and the shallow roots of the white clover prevented any rain fall from saturating past the top few inches. The corn in the tilled trial was poor but still harvest-able. This caused all of the other farmers except myself to drop out of the trial. It also made us consider a strip tillage system instead of a no till system. Mammoth red clover was also used instead of white dutch clover for 2020. On my farm in 2019, I tried using a high residue cultivator to kill the white clover. The HRC worked to kill the clover between the row but not in row and did not help with yield. A prototype “row mow” was used to set back some of the white clover on my farm and it was unsuccessful in setting back the white clover enough to have any effect on yield. The plots with white clover were almost void of any weeds, however the corn crop was a total loss.

2020 I was the only farmer participating in the trial and I decided to focus on finding a method to no till organic corn. I used mammoth red clover rather than white dutch clover because in previous years I have been able to kill the clover by mowing when it is starting to bud. The corn was no tilled in early June and mowed 10 days after planting. One small area was strip tilled. The anhydrous knife type bar that we used had trouble handling the amount of residue of the mammoth red clover and constantly plugged. After mowing approximately half of the clover regrew. Again, the summer of 2020 was dry and the corn suffered greatly from drought stress.  The small area that was strip tilled did significantly better than the no till plot in growth and overall crop health, however all corn plots were a total loss. These plots was not cultivated or “row mowed”. The plots were fairly clean with an acceptable amount of common row crop weeds. I do think that a healthy crop canopy could compete much better with weeds in the future. Along side the corn plot, I planted a small area of grain sorghum. Grain sorghum is a much more drought tolerant crop and proved to do much better no tilled into the mammoth red clover. I was hopeful that I would be able to harvest a crop until we experienced an early frost in September before the grain sorghum reached maturity. I am working with an independent machine shop to develop a strip till bar which can handle high amounts of residue with hope to plant corn on a tilled strip and then use a high residue cultivator to kill the in between row clover. 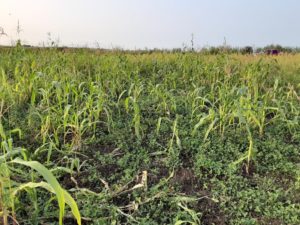 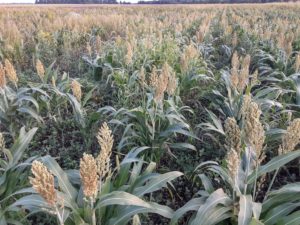 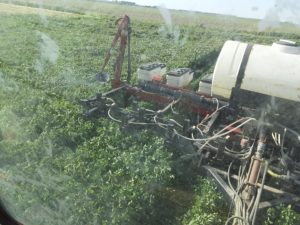 These were the original objectives. We have currently changed our objectives to see if we can grow a harvestable organic no till living cover corn crop. We are also hoping to develop a strip till bar which can handle high amounts of cover crop residue. We do not think that it is necessary to measure farm metrics if we cannot grow a harvestable crop.

No matter what we learn in 2021 we will be diligent in discussing our failures and successes with farmers through field days, meetings and Zoom presentations.

This project will be a 3 crop and 4 year rotation of corn, soybeans, ley (cover crop fallow) and small grain. All crops will be grown all 3 years of this project. The goal of this project is to maintain a continuous living mulch through the entire rotation to assist in weed management and soil fertility under continuous no-till management in an organic cropping system. This will be compared to the same rotation but with limited tillage.

In the no-till rotation corn will be planted into a mowed stand of white clover. We think that by mowing before planting corn we can kill some early emerging weeds and start a decomposition process which will provide nutrients to the corn. We also plan to plant high populations of corn in order to shade the clover and encourage leaf senescence.  A hydrolic powered mowing cultivator will be used to control inter row weeds. This mowing cultivator will be a hydraulic motor mounted to a shaft which powers disk mower knives. Following corn harvest, cereal rye will be no-till drilled at the farmers normal rate for no-till soybeans using the roller crimper method. Soybeans will be no-till planted into the cereal rye cover crop using the roller crimper method and the mowing cultivaor can be used if needed to control inter-row weeds. A ley (cover crop fallow) will be utilized as a method of controlling volunteer cereal rye after roller crimped soybeans and for weed control. Fast growing cover crops will be used based on farmer preference. The ley will be mowed or grazed as often as necessary for weed control. Small grains will be no-till planted into the residue of the ley. Depending on the farmer choice of cover crop, it may be necessary to mow the ley or it may winter kill. White clover will be frost seeded into the small grain and mowed or grazed if needed after small grain harvest to control weeds.

This idea came about based on the success of the roller crimper method of no-till planting soybean and the research being conducted at the University of Georgia with no-till planting corn into white clover.

Some methods have changed. We are now using mammoth red clover instead of white dutch clover. The rotation has changed as well. Small grains are being planted after corn (oats or rye) and cover crop rye for crimping is planted in early September after a small grain crop.

Currently we are just beginning out trial. It took a year in advance to establish the white clover.

So far, no till corn has resulted in an unharvestable crop compared to tilled corn as a normal harvest. No till soybeans have been successful when the cereal rye cover crop is planted in September following a small grain crop of oats or rye. No till small grains has been successful following corn in the fall with cereal rye and on frozen stalk ground with oats. No till small grains seem to yield slightly less and have less weed pressure than tilled small grains. Soybeans yields are similar in no till and tilled when weed biomass is the same. High levels of giant foxtail greatly effect soybean yield.

No outreach has happened yet so all of these are estimates. We plan to get started this year (2019).

4 Farmers reported changes in knowledge, attitudes, skills and/or awareness as a result of their participation
Key changes:

This project has gained a lot of interest from farmers and we are anxious to see how well the crops grow this year.

Because of the poor results in no till corn, farmers have become more cautious with this phase of the rotation. Our success with no till soybeans and small grains has gained interest and we are working on way to fine tune these methods.