Western bean cutworm (WBC) is a native North American pest that since 1999 has been moving east from its historical range in the western Great Plains states. WBC attacks sweet corn, field corn, and dry beans. We released the egg parasitoid Trichogramma ostriniae (Tost) in three sweet corn, five field corn, and three dry bean fields to determine if they could parasitize western bean cutworm (WBC) in the field and if WBC damage was lower where Tost was released. We released at a rate of 90,000 wasps per acre, initiated releases the week after moths were first detected in pheromone traps, and continued weekly releases through the week after peak flight. We collected egg masses from sweet corn and held them in the lab to determine the percent parasitized and estimate percent parasitism within egg masses.

In field corn, damage in the release and no-release areas was not different. In dry beans, damage levels were too low to draw any conclusions despite the moth population being very high at this location the previous year. More work in all three crops is needed to determine if Tost can provide economic control of WBC.

Western bean cutworm (WBC) is a native North American pest that since 1999 has been moving east from its historical range in the western Great Plains states. WBC moths were detected in New York and Pennsylvania in 2010, and numbers have increased each subsequent year, with a dramatic increase in 2015. WBC has one generation per year and attacks corn (both field and sweet) and dry beans. Eggs are laid in masses of up to 200, and in corn, larvae feed on reproductive tissue such as tassels, silks, and ears. Multiple larvae may infest a single ear. In sweet corn, it renders infested ears unmarketable. In field corn, it can cause yield reductions of up to 30% and the damage may increase the risk of ear infection by mycotoxin-producing fungi. In dry beans it feeds on developing beans, and depending on the amount of bean consumed, can either decrease yield, as small damaged remnants of beans are lost during harvest or cleaning, or decrease quality and the ability to sell to premium markets if larger damaged beans remain in the packed product.

Conventional growers have both effective insecticides and genetically engineered Bt corn as options for managing WBC. In organic production, genetically engineered corn is not an option, of course, and the efficacy of insecticides allowed for organic production against WBC is unknown because populations just this year reached levels in NY to make it possible to conduct trials. Organic growers need demonstrated effective options for managing WBC on the increasing acreages of organic field and sweet corn (31,000+ acres in NY and PA) and dry beans, which are increasing in acreage in NY as a result of new premium markets for organic beans.

Determine if Tost can parasitize WBC eggs in sweet corn.

Releases of 90,000 wasps per acre were initiated the week after first trap catch and continued through the week after peak trap catch with the exception of the added Erie county sweet corn field, in which releases were started at peak trap catch when corn was in the late whorl stage (See Table 1 for details). In field corn and dry beans, areas of approximately two acres and release rows were flagged at the edges of the field. In sweet corn, releases were throughout the entire field. Release rows were 100 ft apart. Release packets each containing 30,000 wasp pupae were distributed evenly throughout the release area. Previous research has shown that wasps disperse about 50 ft. around the release site. The first packet was placed on a plant 50 ft. from the edge of the field and subsequent packets were placed at 100 ft. intervals. Release locations were flagged and used for subsequent releases. All release packets and flags were removed from the field when damage evaluations were conducted. Sweet corn fields were scouted weekly, using a 1% infestation with WBC to trigger a spray. In Jefferson county, the fields were sprayed with Entrust if they went over threshold. In Erie county, the grower did not have a sprayer for the sweet corn.

In sweet corn, WBC egg masses were collected weekly by cutting out the section of leaf with the egg mass, and held in the lab in petri dishes with moist filter paper until either WBC larvae or Tost wasps emerged. Percent parasitism of egg masses was estimated.

During this project, all three areas we worked in were in a moderate-severe drought condition, which negatively affected crop growth and resulted in one of the Jefferson county sweet corn fields being mowed down. Effects on Tost adult survival and fecundity are unknown.

WBC populations were highest at the Jefferson county sweet corn site (Fig. 1), where scouting the week of 7/29 indicated the need to spray based on the presence of multiple WBC egg masses. Based on our 7/29 scouting report, the grower sprayed both fields with Entrust and repeated each week until harvest. He reported very low levels of infestation or damage at harvest. We also found newly hatched egg masses with associated dead larvae indicating that Entrust was effective.

Twenty-eight egg masses were collected from the two small fields that week, and a total of 52 were collected over the three-week peak flight period. We had never followed Tost parasitized WBC eggs in the lab before but learned the appearance of different developmental stages and confirmed the appearance of parasitized eggs once adult wasps emerged from them (Fig. 2). Summarized over the three-week collection period, 59% of egg masses and an average of 64% of eggs within an egg mass were parasitized (Table 2).

Egg masses with no parasitized eggs typically hatched 100% WBC larvae. Parasitized egg masses were often a mixture of parasitized eggs, eggs that didn’t hatch and may have been killed by host feeding (wasps feeding on egg tissue), and eggs that hatched WBC. We did not attempt to estimate the level of potential host feeding. In Erie county, trap catches at the original release field were extremely low, and when a second sweet corn field was in the late whorl stage at peak moth flight we shifted releases and evaluations to that field, which was adjacent to field corn in which releases had been initiated the first week after moth detection in pheromone traps. 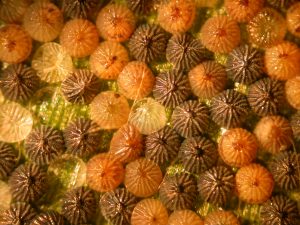 In Erie county, the growers have relied on releases of Tost for European corn borer control and do not own a sprayer set up for spraying sweet corn. WBC populations were lower than in Jefferson county (Fig. 1). We were only able to collect three egg masses from this field due to the delayed initiation of releases, electrical storms, and time constraints. One hundred percent of the egg masses collected and an average of 89% of eggs within egg masses were parasitized (Table 2). We found 4.6% of ears infested during our harvest evaluations and the growers reported low levels in their harvests as well (Table 3).

Field corn results were surprising. In Jefferson county, there was a trend toward higher levels of damage in the release areas of the fields (Table 3). After evaluating damage in the three fields that received Tost releases we became concerned that wasps had dispersed throughout the entire field, eliminating our untreated control, so we evaluated another of the grower’s fields that had not had releases. The damage in this field was noticeably lower than in the release fields. Planting records were not available from the grower to see if this was possibly related to variety. When I shared these results with the grower he said “what are they doing, calling the moths in? A colleague at NYSAES who works with chemical communication between insects responded, “given what we’ve been learning recently, it doesn’t seem out of the question.” We will be following up on this hypothesis this spring in a flight tunnel with WBC moths from a colony being maintained in Nebraska. In Erie county, overall damage levels were lower than in Jefferson county, but in only one field pair showed lower damage in the release field. More work, including collecting egg mass, is needed in field corn to confirm Tost’s ability to parasitize WBC in field corn.

The farm we worked with had very high WBC trap catches in 2015 and sprayed their dry bean fields. In 2016, trap catches in the area were substantially lower. Infestation levels in the dry beans were too low to draw any conclusions about the effectiveness of Tost releases for reducing WBC damage (Table 3). Our scouting enabled us to recommend that the fields not be sprayed for WBC in 2016.

In summary, our results show that weekly releases of 90,000 Tost per acre from the week after the beginning of the moth flight through the week after peak flight resulted in an average of 59% of egg masses and 64% of eggs within an egg mass parasitized in sweet corn in a high WBC population area. This level of parasitism did not keep fields below the very low 1% of plants infested action threshold for fresh market sweet corn. Weekly applications of Entrust provided good control of WBC, fall armyworm, and European corn borer. At lower population levels in Erie county, 100% of egg masses collected and 89% of the eggs within an egg mass were parasitized, and damage levels in sweet corn were acceptable despite releases starting later in the moth flight than planned. In field corn, average damage levels in release and non-release areas were nearly identical, 14% in release areas and 15% in non-release areas. Given the level of parasitism we saw in sweet corn we would have expected to see some level of damage reduction in field corn, but we did not. The WBC population in the dry bean fields was too low to draw any conclusions.

Results are too preliminary to share with growers as recommendations. This report will be one form of outreach and we will link to it from the NYS IPM web site.

Our results are too preliminary to conduct an economic analysis

Both sweet corn growers participating in this study were already releasing Tost against European corn borer and plan to continue to do so, releasing at higher rates during the WBC flight. Until we have additional information, we would not recommend that sweet corn growers who are not already using Tost in sweet corn begin using it for WBC control. Nor would we recommend it to organic field corn or dry bean growers at this point.

Many questions need to be answered to determine if Tost can provide economic control of WBC in sweet corn, field corn, and dry beans. They include:

Is economic loss in field corn in NY high enough to need intervention?

Is economic loss in dry beans in NY high enough to need intervention?

What is the ideal release rate and timing in the three crops?

Would the use of a degree-day forecast for adult WBC flights for timing releases to coincide with the beginning of the flight improve control?

How much mortality does host-feeding contribute?