This project addresses Northeastern vegetable farmers’ needs for sufficient production and yield, careful nutrient management and climate resiliency, by using a natural and potentially locally-produced item made from a waste product from sheep farms: pelletized raw wool.  We conducted a study of how wool pellets affect nitrogen and phosphorus interactions with plants and soils, and how wool pellets are affecting soil moisture content.

Incremental and final findings will be shared through field walks, print and web-based materials, video and social media with vegetable growers, shepherds, agricultural service professionals and other colleagues throughout the region.

This project seeks to:

These are important questions for vegetable farmers.  If we find that by using wool pellets for N and K, plants utilize existing soil P, that means less leaching into nearby waterways – a win for producers and the community. And if we find the pellets release N slowly enough so there is minimal, if any, runoff of excess, that too, is a win for both producers and the community.  And if we find the hygroscopic properties of the pellets shows they can help absorb the moisture in excessive precipitation events, and then release in drier periods, this could help eliminate much of the need for irrigation and running electrical pumps, both promoting resilience and saving money for  producers.

This project explores two agricultural issues: nutrient management on vegetable farms and utilization of wool, currently a waste product and cost for sheep producers to dispose of. We are specifically interested in how well pelletized raw wool performs for plant and soil needs of nitrogen (N) and phosphorous (P), and soil moisture content over time.

Vermont vegetable growers must carefully consider fertilizer use on their crops, seeking to balance productivity, costs, regulatory limits of N and P, and needs of their sites and soil type(s). Commonly used products, such as compost and chicken manure, often applied at rates that result in higher concentration of P than a crop’s ability to utilize it, result in water quality issues.
Meanwhile, Vermont shepherds contend with costs that currently do not contribute to their revenue.  Shearing sheep is a necessary step in the husbandry of this small ruminant. Whether raised for meat or milk, an annual “haircut” is required for their health. Since much of the clip produced in the northeast is coarse wool, not suitable for value-added products that require softness like yarn or clothing, it has little value.  Since 1994, the market price for raw wool has been dropping, and is now below the cost of shearing and the transport of it.  A small percentage has the fine softness used for many small batch cottage industries, but generally, if not sold to the local wool pool collection, many simply pile it in a corner of their barn or haul it out to the woods to dump it.

Findings from a USDA Rural Development-funded project conducted from 2016 – 2019 indicate an opportunity to address these issues for both vegetable growers and shepherds with this natural, locally produced item. Analysis of wool pellets, reveals an NPK profile average of 9-0-4, supplying nitrogen, virtually no phosphorus, and contributing small amount of potassium. The nitrogen slowly releases due to physical properties of fibrous wool pellet’s slow breakdown. For many vegetable farmers in Vermont this is an ideal combination. Many are over their regulatory limit for P, and need a source of N that supplies the nutrient at a time a crop needs it.  A slower N-release rate helps to avoid the risk of nitrate leaching and runoff before plants can utilize the nutrient.   Additionally, fifty percent of the weight of wool is carbon and thus pellets may also provide an opportunity for farmers to sequester carbon through their choice of fertilizer by incorporating the wool pellets into the soil.

Trials conducted with three Vermont vegetable farms in 2019 indicated that wool pellets may, in some ways, have superior qualities to the commonly used peanut meal or compost.  Wool’s hygroscopic quality means an ability to ameliorate climate/weather extremes that contribute to excessive or limited soil moisture content because it can absorb, hold and release moisture as well as nutrients, over time.

The experimental design is a completely randomized design with four replications of  four treatments, including: non-treated control; grower-standard fertilization; wool pellet fertilization at 25lbs wool pellets per 100ft as recommended by the manufacturer; and wool pellet fertilization standardized to match N input of grower standard treatment. The experimental plots are 3.3 m sections of a single field bed, totaling 160 bed feet. Data were collected from 1 m  sections within the center of each plot to minimize edge effects between treatments.  All data are being  analyzed for mean differences using one-way ANOVA (SAS v.9.3, Cary, NC) with fertilization treatment effects separately analyzed for each crop and site.

This trial was conducted in two Vermont locations, one at the UVM Horticulture Research and Education Center in Burlington and Cedar Circle Farm and Education Center in East Thetford. The soil types in these locations are Adams and Windsor loamy sand and Hartland silt  loam, respectively. The experimental design is a randomized complete block design with four replications and four treatments for both crops, spinach and tomatoes.

At each site, one bed each of spinach (Spinacia oleracea, cvr. ‘Kolibri’) and tomato (Solanum lycopersicum, cvr. ‘Skyway’) were grown for use in the trial. Both crops were seeded in the greenhouse for later transplanting into the research plot. Spinach was grown with three rows per bed with 0.3 m between rows and 0.3 m between plants within the row. The crop was managed using each grower’s standard practices for cultivation, weeding, and irrigation.

Tomatoes were planted in one single row per bed with 0.6 m between plants. Spinach was transplanted on 4 May and 26 April for CCF and HREC sites, respectively. Tomatoes were transplanted on 24 May at CCF, and on 23 June at HREC, with the later date selected in order to better align with the farm’s fall markets. In midsummer, tomatoes at CCF were infested with Colorado potato beetle (Leptinotarsa decemlineata) and organic pesticide treatments applied twice. Despite treatment, the plants were decimated by the insects, and no further work was done at that site with the crop.

The primary variable in this study was the type and/or amount or fertilizer used to provide supplemental nutrition to each crop beyond that supplied by the soil. Wool pellets were from Wild Valley Farm (Croyden, UT).  Commercial fertilizer used in comparison treatments was Pro-Booster 10-0-0 (North Country Organics, Bradford, VT). Pro-Booster is a mixed, pelleted fertilizer blend certified for use in organic production systems. In addition to soil building through cover cropping and prior-season compost application, farm managers at both research sites use this product as their standard fertilizer to meet crop nitrogen needs beyond that provided through decomposition of soil organic matter (SOM).

Spinach and tomatoes will be harvested per the grower standard, and marketable yields will be recorded by weight in pounds.

Pre-season and post-harvest soil samples were taken at 6-8" depths. Soil samples were submitted to the University of Vermont Extension soil analysis lab. Temperature and soil moisture were measured weekly using a soil thermometer and TDR soil moisture probe. Wool pellets were submitted to the University of Maine soil analysis lab and are found to have a 9-0-4 (NPK) mineral nutrient profile.

Analysis, summary, interpretation and presentation of any data gathered or program results, whether qualitative or quantitative.

Due to a shift in personnel after one key personnel left UVM and another retired (but stayed on the project part-time), this project has shifted into an undergraduate student-centered service learning project. Data in fall 2021 were collected by a team of students and summarized in December 2021. In January-February 2022, a team of student interns are completing full statistical analysis of all project data for publication in a scientific journal and a project fact sheet in spring. Preliminary analysis shows great promise for wool as an alternative fertilizer treatment compared to standard, commercial organic fertilizers: 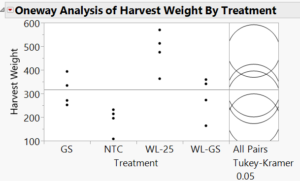 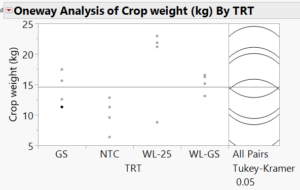 Data are being analyzed by our student research interns. However, this preliminary analysis of crop yield suggests that wool pellets at the full manufacturer’s suggested rate yielded greater produce than the non-treated control. This is useful, but does not indicate whether or not the high rate led to reduced fertilizer efficiency and potentially greater runoff or leaching. Equally important, the wool pellets applied to a standardized equivalent rate of nitrogen as the grower’s standard, commercial fertilizer rate was no different from the grower’s standard. This suggests that wool pellets may be a viable alternative to the fertilizer programs presently used on commercial organic vegetable farms in the Northeast.

The UVM Center for Sustainable Agriculture is well-positioned as a trusted resource for information, with robust engagement with farmers and regional agricultural service providers, and as a part of UVM Extension.  We will seek to broadly share our findings within our networks - indeed it is the enthusiasm and interest of these networks that are inspiring our pursuit of this work's next phases.

This research is being done for the benefit of the region's vegetable growers and livestock farmers, and the outreach and communications will be offered with those audiences in mind. Kimberly Hagen, with support from Center for Sustainable Ag. colleagues, will take the lead on outreach by: