Organic row crop vegetable growers are overly reliant on tillage to manage weed pressure due to their inability to spray herbicides. These farms are limited in methods they can employ to control weeds. For small-scale farms that are attempting to reduce/eliminate tillage, the main method used for cultivation is hand labor which is increasingly expensive and hard to find. Recently, growers across the United States have started experimenting with a process called occultation. Occultation involves irrigating a growing area and then putting a black, 5 millimeter tarp over the top of a growing bed and leaving it there for 2-6+ weeks. Weeds in the bed germinate in warm, moist conditions, and die due to lack of light. Once the tarp is removed, the clean seed bed is planted/seeded and minimal soil disruption occurs.

Our research question simply is, “What positive effects does occultation have on produce production?” More specifically we will measure the effect of occultation on labor hours, product quality and yield, and weed pressure in the growing area. After the results are gathered, we will co-present the research findings at two conferences (CA Small Farm Conference, Ecofarm) to at least 50 people total and create two podcasts with two of the farmers we partnered with, which will be downloaded at least 200 times total. We will write a short report on the experiment which will be published for free electronically. We will print 200 copies of the report and distribute them at conference presentations. This practice is potentially significant because with minimal up-front investment, small-scale organic farms could significantly reduce costs, improve product quality, have higher profit, implement an environmentally friendly practice, and cause less wear and tear on their bodies.

We have added all major project activities (related to the objectives) and all outreach activities to a GANTT chart that is attached. Please see that chart for more detailed information on who is responsible for what project activities during particular time frames.

Objective 1: The experimental design will be a complete randomized block design with four blocks at each of the five farms. Farms may trial either carrots or beets, but they will maintain the same crop in both the treatment and control sub-blocks, herein referred to as “plots”. Each plot within the experimental blocks will be 25-50 feet long and between 40-60 inches wide. All five farmers will occultate their treatment zones for four weeks prior to planting/transplanting into it. The Project Coordinator will lead this process and work one-on-one with each farm to make sure they execute all the steps correctly.

Objective 2: The experimental design will be the same as mentioned in objective one. Farmers will use the same production methods in both the control and treatment plot, except that the treatment plot will be occultated prior to planting/seeding. The control plot will be managed using typical ground management practices for that crop (e.g. tilled right before planting/seeding). Once the control and treatment plots are planted/seeded with the crop, they will both be irrigated & cultivated exactly the same (drip, overhead, weeded by hand, hula hoes, cultivating tractor, etc). The Project Coordinator will work one-on-one with each farmer to make sure this process is followed. There will be minimal work by the farmer except with placing the tarp and removing it.

Objective 3: Data will be collected on the amount of labor hours required to move the tarp on and off, to complete any minor maintenance during its use, and any time spent on cultivation. This will help determine a cost-benefit analysis of the tarping vs. non-tarping practice. This objective will require a fair amount of collaboration by each of the partner farms as they will be collecting these data and reporting to the Project Coordinator.

Objective 5 & 6: Measuring the produce quality and yield in the control vs. treatment plots at each of the farms will occur by taking a composite sample of 10 units (carrots/beets) from each plot. The treatment and control plots will be gridded off into ten uniform sub-plots and one unit will be gathered from each block. Then all ten units will be photographed and notes taken on product quality (uniformity, surface defects, leaf defects). Each of the 10 units will be given a 1-10 score (1 poor, 10 excellent) based on quality characteristics. All 10 units will be averaged together to create an average quality score for each of the three times this measurement is taken during the research. We will also measure yield during this process by weighing and recording the 10-unit samples from each plot (leafy matter excluded). Each partner farm will be expected to communicate the date of transplant/germination to the Project Coordinator. The Project Coordinator will go to each of the farms at two and five weeks after the transplant/ germination date to record produce quality and yield data. These data will also be collected by the Project Coordinator on the date of first harvest of the crop, for a total of three data collection points.

The public report was completed at the end of the project, providing a summary of the project, key findings from the occultation trials and benefits, tradeoffs and recommendations from the participating farmers. This report, including the data analysis, was review by Nicole Tautges of UC Davis to ensure accuracy and appropriate presentation of data. This public report is oriented toward farmers interested in the practice of occultation and has been distributed to farmers who signed up for a copy during presentations, as well as distributed online through CAFF’s social media, e-newsletter and website. A digital copy will be maintained and available for download on CAFF’s website under the Climate Smart Farming program pages.

The two podcast episodes were developed in collaboratively with partner farmers Tim Van Wagner of First Rain Farm and Jeremy Minaeu of Super Tuper Farm, respectively. Each episode includes an interview with the farmer, a tour of the farm and narration providing background information about the practice. Both podcasts were published in early July as the first two episodes of season 2 of CAFF’s podcast, “The Farmer’s Beet,” which is available on iTunes and Spotify. 10 days after publishing the podcast episodes, there had been 62 downloads of episode 1 and 90 downloads of episode 2. We expect these numbers to increase significantly in the coming months as a result of outreach through social media and CAFF’s e-newsletter. Links to the podcasts will also be available on CAFF’s website. See the information products section of this grant report for podcast episode files.

In addition to these outreach activities, CAFF also posted project updates throughout the duration of the project on CAFF’s social media platforms.

5 Farmers reported changes in knowledge, attitudes, skills and/or awareness as a result of their participation

5 Farmers changed or adopted a practice
28 Farmers intend/plan to change their practice(s)
1 Grant received that built upon this project
Project outcomes:

This project has affected agricultural sustainability in multiple ways. The project has contributed data and farmer knowledge to the agricultural community about an important weed management tool appropriate for organic farming systems. While little research has been done on this practice, interest in this practice is high among small-scale organic diverse vegetable farmers. This interest was demonstrated by two well-attended conference presentations, including 45 farmers who signed up to receive the final project report. Furthermore, occultation is considered an essential weed management tool for small-scale organic no-till systems as it effectively replaces tillage, which is the primary tactic for weed control in organic vegetable farming systems in California. By researching and providing education and outreach about this practice, this project has contributed to the overall sustainability of agriculture, especially for small-scale organic and no-till vegetable farmers.

Environmental benefits from the practice of occultation reported by the participating farmers during the project include enhanced crop residue decomposition, reduced tillage, soil cover and protection during fallow periods. Reduced tillage in this project/practice implementation is perhaps the most significant environmental benefit to farming systems by reducing erosion and loss of soil carbon associated with tillage.

In addition to labor, the project demonstrated that the practice of occultation resulted in fewer weeds than control plots for 4 out of the 5 farms with significant differences found in 2 out of the 5 farms. To assess this, the project included weed survey collections in occultation and control plots throughout the trial (at 30%, 60% and 90% of crop maturity). High variability in data occurred at both Kern Family Farm and First Rain Farm. Higher number of weeds surveyed at Kern Family Farm may be due to weeding error by the farm crew as well and multiple natural disturbances (deer and rodent damage), which were reported by the farmer. Data collected at First Rain Farm may have been influenced by compost spread in the control zone that was not covered by the tarp, leading to the compost drying out. Once the crop was planted and irrigated, the compost biologically activated which may have contributed to both less weeds and crop in the control bed. The data for the Hillview Farms trial reflected the challenges the farmers faced with establishing a new vegetable field in what was previously a pasture with a large weed seed bank.

Another economic benefit of this project is that it demonstrated that the practice of occultation can also increase overall crop quality, which was the case in 3 of 5 farm trials. Overall crop quality was a qualitative metric developed with input from the farmers based on a visual rubric ranking system from 1-10 (forking, top quality, root smoothness, uniformity). Higher overall crop quality is anticipated by growers to increase the marketability of the crop.

At each farm CAFF also measured quantitative indicators for crop quality such as root length and root weight. For these indicators, differences between the crops from the occultation and control beds were not found to be statistically significant, with the exception of root length at Kern Family Farm which was higher in the occultation beds. 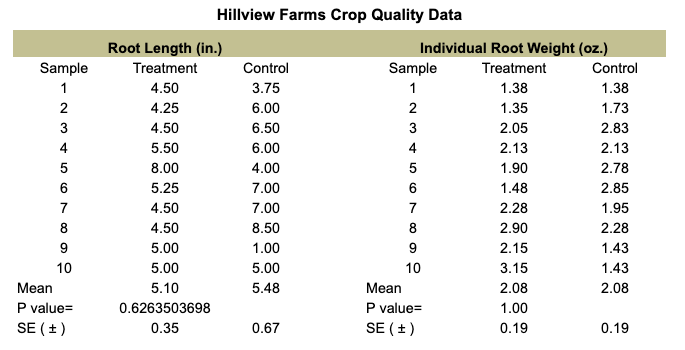 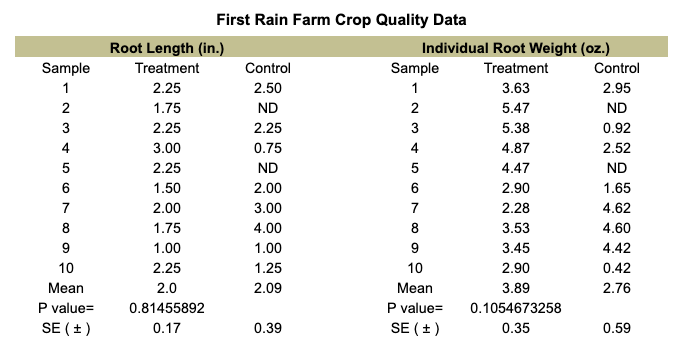 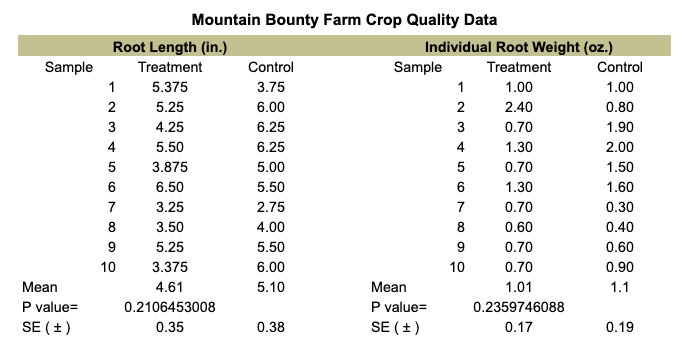 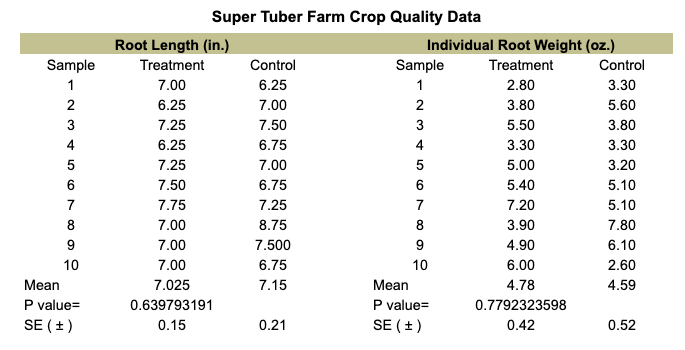 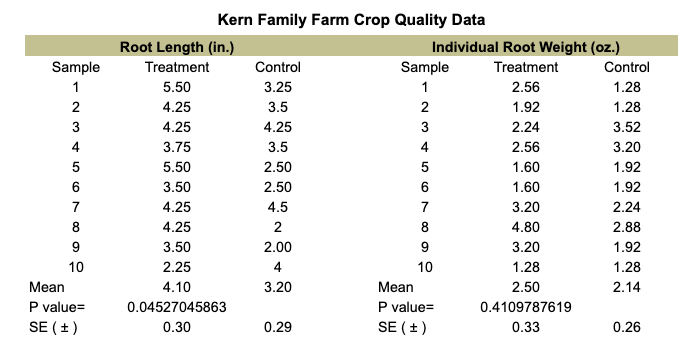 The primary social benefit of this practice is that by reducing the need for hand weeding, there is a reduction in the amount of stoop labor for the farms, contributing in the long run to their overall increased well-being. This was demonstrated in the weed labor data as well as observations made by the farmer.

While the practice of occultation, or weed with tarps, has a strong tradeoff of requiring plastic materials, it is considered an important tool that enables the successful implementation of more sustainable farming systems, particularly no-till, through effectively managing weeds without tillage. See the “On-Farm Occultation Research Trial Report” uploaded in the information products section of this grant report for a public-facing summary report of results and farmer benefits and tradeoffs.

This project was a good first step in researching the practice of occultation. While this project focused on the assessing the labor savings, agronomic and economic benefits associated with the practice of occultation, additional research is needed to better understand soil health benefits associated with the practice. During the process of occultation, weed and crop residue are able to decompose in warm, moist environment. In the future, it would be beneficial to conduct research on the impact of this practice of soil microbial population and soil carbon and nitrogen in comparison to weed management with tillage.