Beekeepers in the United States have reported high colony losses for more than a decade. Among many stress factors experienced by honey bees, beekeepers report queen failure as one of the highest contributors to colony loss. Beekeepers can effectively reduce the rates of colony mortality in their apiaries by replacing failing queens, which are available through queen producers. Beekeepers assess their colonies in January and February in preparation for almond pollination services in California. Accompanied by high colony losses, beekeepers may struggle to fill their pollination contract commitments with healthy queenright colonies.

Reports on management practices suggest that the rate of queen replacement by U.S. beekeepers has drastically increased in recent years. This heavy increase in demand for new queens warrants exploring solutions to increase queen supply. One available technique involves overwintering queens in "bank" colonies. For this technique, beekeepers purchase late-season queens and suspend them inside a single bank colony during the winter. After winter, beekeepers can use these queens to replace failing queens in colonies prepared for almond pollination services or introduce them into newly divided colonies after the almond bloom to offset winter colony losses.

We proposed to investigate the technique of overwintering honey bee queens in bank colonies with Oregon beekeepers that pollinate almonds in California. We overwintered queens in bank colonies with three commercial beekeeping operations (September 2020 – January 2021). Bank colonies were assessed for strength (frames of bees, frames of brood), amount of stored honey, and pest and pathogen levels (Varroa mites, Nosema spp.). We sampled queens from these bank colonies for morphometric and reproductive metrics and will compare results from queens confined in banks with unconfined queens from established colonies. We also introduced banked queens into new colonies at the end of the almond bloom, and their performance was assessed throughout the year (March 2021 – January 2022).

We gathered feedback from producers when we presented preliminary results at several industry conferences in 2021. Taking advice from these producers, we followed a stringent protocol for selecting bank colonies and overwintered queens in bank colonies with two different stocking rates in Western Oregon (October 2021 – January 2022). We will continue to evaluate performance of banked queens by introducing them into new colonies alongside Hawaiian-sourced queens in March 2022.

Our goal was to evaluate the technique of overwintering queens in bank colonies for beekeepers in Oregon. We posed some research questions regarding this technique: will overwintering queens in bank colonies for approximately 4-5 months effect their reproductive potential? How will these queens perform compared to the standard Hawaiian-sourced queens? What is the optimal positioning for queens inside bank colonies to maximize winter survival? We will continue evaluating this technique next winter. The following is the progress pertaining to the study:

Refer to the two attachments of a Gantt chart for a timeline covering all project objectives.

The research team (PI, co-PI, and five producers) determined necessary attributes of bank colonies based on published research findings and personal experiences. We also agreed on a bank frame design that holds 20 queens. In September and October 2021, we constructed five bank colonies with three producers, each residing in different regions of Oregon. We assessed every colony in one of the producers’ highest performing apiaries and chose five candidates to serve as bank colonies based on criteria from our discussion. We placed 20 experimental queens in each of the five bank colonies. An additional 32 colonies were assessed in the same apiary to serve as control colonies. The original queen was removed from each control colony and replaced with an experimental sister queen. Queen survival was determined in bank colonies before and after transit to California in January.

After approximately two weeks in California, we sampled queens that were confined in bank colonies and unconfined in established colonies for each beekeeping operation (n=120 total) and sent to North Carolina State University’s Honey Bee Queen and Disease Clinic and analyzed for morphology, total sperm count, and sperm viability. We successfully replaced each queen sampled from control colonies.

In March 2021, we introduced queens from bank colonies 0f two beekeeping operations (BK1 and BK2) alongside Hawaiian sourced queens into newly made colonies (n=36 per treatment group). Hawaiian-sourced queens are the solely available mated queens in the U.S. in March thus serving as the control group for our colony performance evaluation. We evaluated the performance of these colonies in June, August, October of 2021, and February 2022. Performance metrics included colony strength, brood pattern, and queen survival.

In October 2021, we constructed ten bank colonies with one Oregon producer and tested two different stocking rates—30 queens and 60 queens per bank (n=5 banks per stocking rate). We chose bank colonies by assessing field colonies in this producers’ highest performing apiaries in September and following our current selection criteria.

Queens survival counts were recorded periodically throughout the winter (October 2021-January 2022). The bank colonies were transported to California for almond pollination in mid-January. After approximately two weeks in California, queens were sampled from bank colonies (n=20 per treatment group) and sent to North Carolina State University’s Honey Bee Queen and Disease Clinic and will be analyzed for morphology, total sperm count, and sperm viability.

Similar to last year, we will evaluate the colony performance of queens that overwintered in bank colonies. We introduced queens from bank colonies of 30- and 60-queen stocking rates and Hawaiian-sourced queens into newly established colonies (n=36 queens per treatment group) in March 2022. We will evaluate colony strength, brood pattern, and queen survival in these colonies during June, August, October 2022, and February 2023.

In 2020, bank colonies had the following attributes when the queens were introduced.

Bank colonies that were selected in 2021 followed the same selection criteria from 2020 (see above) and also included the following:

Table 1. Average and range of queen survival (%) in queen banks (n=20 per bank) that overwintered in three beekeeping operations in Oregon (September 2020-February 2021).

We compared morphometric and reproductive metrics of queens that were a) confined in bank colonies and b) unconfined in established colonies during the 2020-2021 winter from three beekeeping operations. We found no significant differences in queen head width, thorax width, and total sperm count with banked and non-banked queens. However, queens were significantly heavier in the control group of the third beekeeping operation (BK3) than banked queens from all three beekeeping operations (Fig. 1; p<0.001). This finding provides slight evidence that queens lose weight due to the prolonged banking process. Additionally, the banked queens from BK3 had significantly lower percent sperm viability than the unconfined control group of queens from BK3 (Fig. 2, p=0.006), but the percent sperm viability among queens from BK1 and BK2 had no discernible differences. We speculate that the poor survival associated with bank colonies from BK# (Table 1) may be associated with the lower sperm viability of these banked queens. 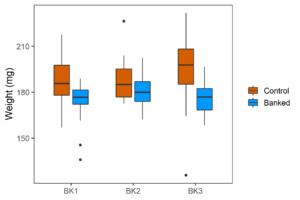 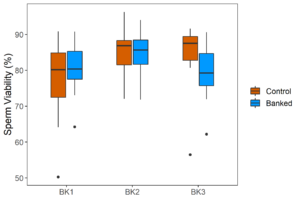 We evaluated the performance of colonies headed by banked queens from two beekeeping operations (BK1 and BK2) and Hawaiian sourced queens (n=36 per treatment group) in June, August, October 2021, and February 2022. Performance metrics included queen survival, brood pattern, and colony strength. We found no differences among the three queen sources based on the odds of survival within the 11-month evaluation period. Analyses of brood pattern and colony strength (frames of bees) assessments are pending.

18 Farmers reported changes in knowledge, attitudes, skills and/or awareness as a result of their participation

Both current and future results from this project can be used to increase the sustainability and profitability of the Pacific Northwest beekeeping by reducing colony loss during almond crop pollination. This study also has potential to reduce risk of poor pollination due to healthy honey bee colonies, therefore increasing agricultural crop yield that requires bee pollination. We already received tremendous support for researching the technique of overwintering queens in bank colonies in Oregon. Active producer participation and widespread interest in this project bolsters strong potential for industry adoption of this technique.

We do not have any final recommendations yet, but we have collected valuable data that will help us refine the current methods. Project improvements include determining optimal queen placement in bank colonies, validating pest and pathogen pre-screening methods for candidate bank colonies, and improving bank colonies by increasing colony strength in September.