During the 30+ years we have been raising blueberries in the Missouri Ozarks, we have noticed a decline in the vigor and productivity of a field after it reaches 20 to 25 years of age. Typically at that time, in our area, growers who have found it necessary to replant in the same location have had problems getting new plants established. This is particularly a problem on you-pick farms where all of the farm facilities such as parking lots, check-out buildings, store, restrooms, restaurant, etc., are adjacent to a declining blueberry field. In this project, we are attempting to establish a protocol that will allow us to renovate, replant and reestablish an integral field, rebuilding it to once again be a productive part of our operation. I would also like to mention here that each phase of this project has captured the interest of our farm guests and provided an educational opportunity for them to better understand our approach to sustainable farming practices, from cover-cropping to planting. The project has not only generated many questions but it has our repeat customers pulling for our efforts to renovate one of their favorite fields.

There are five components of this project: Field Cleanup, Cover Crops, Preparation of Soil Amendments, Planting and Data collection/Data Analysis.

We have completed four of these primary project components successfully and have had two rounds of data collection and completed analysis for the new field’s first and second growing seasons. As we anticipated, we feel that a second year of data collection has been valuable as trends in data have changed significantly. This change is likely due to the typical nature of the blueberry root growth during the first year in the field. Blueberry roots have a tendency not to grow much out of the existing root ball over the first growing season. We feel that this characteristic minimizes any effect that our soil amendments could have had on first year plant growth. This theory seemed to be validated in the first year by an observed inverse relationship between the growth and vigor of a plant and the application of amendments. While finding that a certain amendment might have a deleterious impact on plant growth or vigor, I felt that we needed an additional growing season to see better what was going on.  An alternative explanation might be that soil moisture could have been impacted by the addition of the full complement of soil amendments used. We requested and received an additional unfunded extension for this project through the 2017 growing season, to be completed with the final report completed by December 15th of 2017. In addition, we will also continue Fall data collection over the next 3 years so that we will have a more complete view of the impact of these amendments. This information will be made available in outreach efforts as well in years to come.

Preparation of field for one of four sorghum sudan cover crops.

Our project is progressing well with regard to our objectives. Specifically, objectives achieved include:

1. Field clean-up (Completed July 2012) a. Old plants were removed, including the roots as fully as possible. b. Previous irrigation lines were removed. c. Soil that was previously mounded for the raised beds was distributed over the field so as to expose it to full cover crop treatments and to facilitate cultivation of cover crops and solarization of soil.

2. Cover Cropping a. Sorghum Sudan cover crop (prepped field, planted, chopped up and incorporated by turning in with plow in Springs of 2012, 2013, 2014 & 2015) b. Mustard cover crop (prepared field, planted, chopped up, incorporated and rolled field to maximize bio-fumigative impact (early Spring 2013) (Late crop of Sorghum Sudan was also planted in 2013.)  We have used cover cropping since we began our farm in the summer of 1982. We have noticed anecdotally a direct relationship between the number of cover crops a field has had and the health of that field’s plants.  In that the cost of a field failure would be especially great in blueberries, we spent several years cover cropping to help insure this field’s success.  The cost benefit of such extensive cover cropping would be valuable in itself.

3. Plants selected, acquired and scheduled to arrive just prior to planting time. We selected the variety Duke as the trial variety, in that it has typically been a strong variety for us and it is an early variety appropriate for planting close to the location where farm guests enter our fields.

a. Worm casting tea. I attended a composting class which included a vermiculture component, conducted by Dr. Hwei Yiing Li Johnson of Lincoln University. This added to my composting knowledge and aided us in establishing two worm beds for use to inoculate our worm casting tea.

b. Inclusion of worms into planting holes. We planted five worms at each planting site included in the project. We had to first select a variety of worm that would 1) have the desired impact and 2) could function in a blueberry root zone environment. Our research led us to Alabama Jumpers, which are large composting worms that work well in breaking up clay, which is one of our field issues. We tested these worms in soils rich in each of the amendments we were planning on incorporating and found that they did well in a mixture of all the amendments incorporated into soil. Alabama Jumpers were acquired and scheduled to be delivered at planting time.

Various media buckets were prepared and 40 worms were placed in each bucket with indicated media to determine if the worms were compatible. They were left for 34 days. The worms seemed most compatible with the full complement of amendments where nearly all of the worms remained in that media bucket. 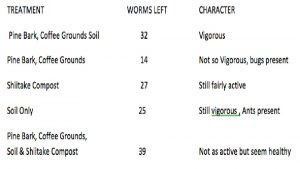 c. Ground pine bark.  We have used pine bark in the past on the farm and have found in a mini study, that we conducted, that it worked as well as sphagnum peat moss as a soil amendment . We located a fence mill that stripped the bark from pine logs and we acquired approximately 40,000 pounds of bark. We ran it through a shredder that produced an amendment with smaller than ¼-inch pieces. This was piled in a conical pile 8 to 10 feet tall. It heated up considerably prior to use but did not fully compost.

d. Composted shiitake logs.  In that our farm has a good supply of spent shiitake logs and mushroom compost can be very beneficial in some planting circumstances it made sense for us to reuse this resource.  Our own spent shiitake logs were ground up using a rented commercial chipper. This process took a bit over a week and yielded two piles of shiitake log chips that were composted. We monitored the core temperatures of the piles and turned when temperature began declining. We added some nitrogen in the form of urea at a very low rate when we turned the piles as per Dr. Hwei-Yiing Li Johnson.

e. Spent coffee grounds. Several years ago I was approached by a company that had access to significant amounts of spent coffee grounds locally.  They asked if I would like to try it as a mulch for our blueberries.  We accepted their offer and applied the mulch in the Spring to about 7 to 10  3-year-old plants and realized an increase in the rate of growth of the plants that were mulched with the coffee.  Approximately 45,000 lbs. of spent coffee grounds were obtained from a commercial coffee brewing plant that produced iced coffees. These grounds were delivered to the farm and covered prior to incorporation into the soil.

5. Planting was accomplished in The Early Spring of 2016.

a. Field was plowed and disked.

c. Beds were further cleaned up, smoothed with a drag, and large rocks were removed from the field.

d. Our planting lister/sub-soiler was used to open up a planting trench down the middle of each raised bed

e. We used our mulch wagon to haul and apply coffee grounds, ground pine bark and composted shiitake logs down the middle of each trench, with the exception of row 81, in which we tested each individual amendment separately.

g. A rototiller (approx. 18 inches wide) was used to till in amendments.

h. Irrigation line was laid out in preparation of planting.

i. Plants were spaced at 4-foot intervals in the row this provided each plant with 2 emitters.

j. As a row was completed, irrigation line was fine tuned near the plants and the plants were watered in by turning on the irrigation system.

k. Each row was mulched with hardwood chips, as per farm SOP for planting blueberries.

l. Plants were maintained, as per farm SOP

i. Weekly fertigation — Not the best situation with young plants the first year but this block was a portion of a mature block that required fertigation.

a. Plants were maintained through the growing season and data was collected after the plants became dormant in the Fall of 2016 and 2017. We chose a time for data collection when most plants were well into their Fall coloration.

b. Four data items were collected for each plant in test row 81. We are including data from the guard plants — the 5 untreated plants between each trial — as controls. We also recorded the same observations from a random sample of plants from the remainder of the planting that received what we termed full treatments (all amendments, worm inclusion, worm castings tea, ground pine bark, composted shiitake log and spent coffee grounds.)

i. Height of plant measured to its longest cane.

iii. Grower interpretation of its vigor, with 1 being least vigorous and 4 being the most vigorous. All observations were made in the same day by the same person, and attempts were made to be consistent in evaluation of all plants. 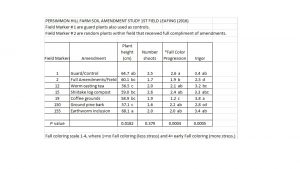 After considering the data collected in the Fall of 2016, we decided that in that it was so inconsistent with our expectations, that we should extend the project an additional year prior to submitting the final write-up.  This decision was based upon the following:

As we compare the various trial groups, it seems important to collect data through an additional growing season because either many of the amendments have had the exact opposite effect than anticipated, or as previously related, the roots have yet to extend out of the root ball far enough for the soil amendments to impact the plant’s growth. We greatly appreciate SARE’s willingness to prolong this project’s data collection phase. 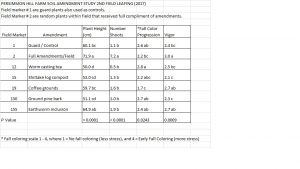 The data collected in the Fall of 2017 showed very different trends than did the first round of Data.

The only variation in this trend was that plants that were amended with only coffee grounds exhibited less stress as indicated by later fall color change than did any other amendment combination.  This validated the initial data collected in the Fall of 2016 which also saw less plant stress as related by later fall color change within the plants that received only the coffee grounds soil amendment.  These plants exhibited less stress than the plants that received the full compliment of soil amendments.

It is entirely possible that subsequent years could alter our results and we anticipate taking data for several years to monitor potential changes.