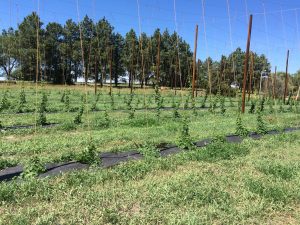 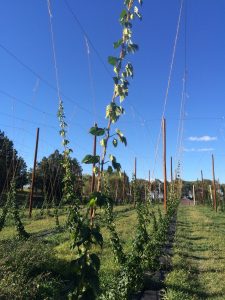 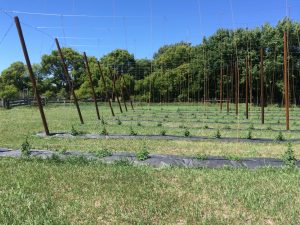 This year I installed two hops plots. One was planted in a heavier clay soil (Martin plot), and the other in sandier soil (cabin plot). Soil tests were obtained from both locations. I prepared the hops mounds by digging holes with an auger, and refilling the hole with the original soil and added compost. I then installed the poles and cabling. My trellis systems are 16 foot tall and contain almost 700 hops plants. I utilized landscape fabric and drip line irrigation. Due to a cold spring in Michigan and Wisconsin where I bought my plants from, the planting was delayed until delivery. I planted as the shipments arrived, from the end of June through the beginning of August. Eight varieties were planted: Cascade, Centennial, Chinook, Cashmere, Triple Perle, Yakima Gold, Hallertaur, and Nugget. Once the plants grew to one foot, I trained them to coconut coir twine. Once the fields where installed, I monitored the irrigation, fertilized, and scouted for insects. Despite the delayed planting, I did have some cone formation. One variety, Chinook, produced enough cones to send off for chemical analysis of oil composition. I was very pleased with the results, as they came back within the expected values for the variety.

I used my grant funding for labor to build the trellis and plant the hops, coir twine, compost, fuel to drive between the plots, and fees for chemical analysis.

RESULTS AND WHAT WAS LEARNED SO FAR

Due to the delayed planting, I was not able to get a measurable harvest to compare the production of the plants on the different sites. However, a visual comparison of the growth and height of the plants indicates that the hops did better in the sandy soil. However, these visual results are anecdotal, and quality conclusions should not be made until quantifiable data can be obtained from a significant harvest at both test plots.

Of the small amount of harvested Chinook from the sandy plot, lab values were obtained. The expected alpha and beta acid oil content for this variety is 10-14% and 3-4% respectively. The Chinook I harvested had contained 11.0% alpha, and 3.1% beta acid. Thus, despite the delay in planting and shortened growing season, this variety was able to produce cones containing oils in the acceptable range for brewing. In addition, I inspected the roots of a handful of plants prior to mulching for the winter. The roots had significantly increased in size and had reached further than a foot from the original planted root ball.

Although there was not enough harvest to perform a comparison, there is strong evidence that hops can grow and thrive in southwestern South Dakota.

Next year I will remove the mulch, then wait for the first shoots to grow. Any winterkill will be noted and recorded. The first set of shoots, called bull shoots, will be pruned. The second set of shoots will be trained to new coconut coir twines. I will then monitor the irrigation, scout for insects, and spray when appropriate. I will take pictures at both plots on the same day to provide visual growth comparisons. In late August and early September I will begin harvesting and oasting the hops cones. Each variety at each plot will be weighed and sent to Alpha Analytics for lab analysis of oil content. Once my results are returned, I will tabulate the data to determine if there is a difference in plant performance among test sites and varieties.

I will submit my report to SARE and Chris Graham to post on the iGrow website, and share it with my fellow members of the South Dakota Hops Growers Association, of which Chris Graham is assisting in the establishment. I will also provide my report to Kim Brannen, the president of the South Dakota Specialty Producers Association, of which I am also a member.