Varroa mites are the single greatest threat to sustainable beekeeping in the Northeastern US, and across the world. Now, a novel genetic trait described by Dr. Greg Hunt (SARE LNC08-295 2008-2011) is Mite-Biting Behavior, the MBB trait is when the honeybees bite off one or more legs from a varroa mite, and the bitten mites will then bleed to death. This project  measured MBB, and its relationship to mite counts, Winter survivorship and colony weight. If MBB can increase Winter survival, it will increase the sustainability of beekeeping by reducing replacement costs of dead bees. This project involves queen breeders, bee clubs and beekeepers in Pennsylvania,Ohio, Indiana, and West Virginis, as well as Penn State and Purdue universities and the extension service. Several recent SARE grants in the Northeast and North Central regions measured varroa sensitive hygienic behavior (VSH) and proved its value for mite resistance. This project builds on that existing work, and incorporates the new grooming behavior MBB, and measured its effects on mite counts, colony weight and currently waiting to see Winter survival.

This project evaluated the relationship between MBB levels and the total number of Varroa mites, colony weight, and Winter Survivorship.  MBB is a recently described grooming behavior trait that has been documented at high levels in some honeybee stocks, but it has yet to be proven as effective and practical tool for controlling/reducing Varroa mite populations, and improved Winter survival.

We compared a test group of MBB selected stocks versus a control group of commercially available stock of unselected bees obtained from a California breeder. The objective is, if MBB proves to reduce mite populations, we can select for this genetic trait in our breeding programs.

The study is currently ongoing in Pennsylvania, West Virginia, Ohio, and Indiana, and, and being conducted by participants from the Heartland Honey Bee Breeders Coop (HHBBC). We made 126 measurements for MBB% in 55 colonies in 7 different beeyards.

The field data has been compiled into an excel spreadsheet, and currently undergoing statistical analysis. Note, the data germane to this report are listed as groups 1 and 2, other group numbers are part of the HHBBC stock evaluations.  See excel sheet attached.

This project had a substantial amount of outreach as part of the PA Queen Improvement Project. We had 2 field days held on Saturday, June 18, 2016, one at Meadow View Beekeeping, LLC in Bethel, PA, and the other at Vorisek’s Backyard Beefarm in Linesville, PA.

In all, there were in excess of 130 people that attended the events. There were 10 county clubs represented, many by their club’s presidents. Over 130 MBB Purdue queen cells, and virgin queens and countless grafts were distributed to the attendees. The Meadeville Tribune covered the event and published and article on June 19, 2016.

Ohio also participated on July 9, 2016 in Findlay, OH.  It was organized by Dwight Wells of HHBBC, 6 clubs participated in the event, and about 90 queen cells were grafted. The skills of queen cell grafting and nuc creation was taught to the participants.

At the PSBA State Picnic we held a queen exchange for mated queens, an estimated 35 queens changed hands on Aug 6, 2016.

During the annual PSBA meeting on November 11, 2016 and the Pennsylvania Queen Improvement Project held and update meeting for all the bee clubs regarding the status of MBB genetics.  Much interest and excitement about the past and future field day events for distribution of MBB genetics. 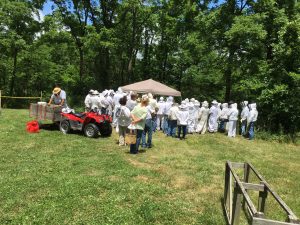