Wild pollinator numbers have diminished over the last 30 or so years in the Lexington, SC area and worldwide. Farmers previously relied on wild pollinators to provide a substantial amount of pollination for their crops. Honey bees have in recent years been used to pollinate crops such as squash, cucumbers, and melons due to the large number of bees per hive. Honey bee colonies may have 30,000 honey bees whereas a bumble bee nest may have only 300 bumble bees. However, honey bees do not fly in inclement weather that includes lower temperatures and wind (1). Honey bees also tend to go down rows whereas bumble bees tend to go across rows or are more erratic in their foraging (1). Farmers are becoming more interested in having alternative pollinators to ensure proper pollination for their crops. 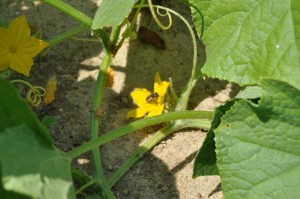 Two, two acre cucumber fields (Cucumis sativus) were planted the first week of May, 2011. We planted the two fields as far apart as we could but this still resulted in the fields being 1.5 miles of each other on this farm. Honey bees typically travel a 2-3 mile area and bumble bees forage in a ¼ to ½ mile range. We were concerned about the honey bee isolation of the bumble bee field and found there were other beekeepers with honey bee colonies within 2-3 miles of the bumble bee field. In addition, we had eight honey bee colonies about 1.5 miles in another field for pollination of other crops. However, this was as far apart the fields could be planted for isolation as possible on this grower’s farm.

The main honeybee nectar / honey flow was over for approximately two weeks prior to the onset of cucumber blooming. There is typically a honey bee nectar dearth beginning mid June in the Lexington, SC area with the cucumbers, in this case, being one of the few nectar sources available. Hence, we had excellent honey bee pollination of the cucumber fields; the cucumbers were one of the main plants blooming in the area.

The bee counts are included in the attached excel spreadsheet and show (using an Excel dual t test) the honey bee visits between the fields are not statistically independent (?=0.05 level). The number of bumble bee visits was insignificant and did not meet the following table bee visit requirements.

The following table is consulted (2) to determine adequate bloom bee visits for cucumbers (need 10-15 visits per bloom per day min):

Feral bee counting occurred prior to placing the bumble bee colonies and honey bee colonies on the field perimeter:

These were all honey bee visits and no bumble bee visits. In the lower field we did notice some alternative unidentified pollinators. This feral bee visit data indicated there were significant honey bees in the area. 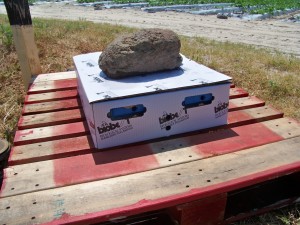 There were insignificant number bumble bee visits ( zero to one visit per counting of the four 10 foot sections) in the bumble bee cucumber field when Table 1: adequate bloom bee visits for cucumbers table was consulted. The number of honey bee visits between both fields, while numerically quite different, was not statistically different using a paired t test at the ?=0.05 level. Using bumble bees (Bombus impatiens) for pollination of cucumbers in the Lexington, SC area in an open field did not work during the middle of June. There were not enough bumble bees interested in the cucumber blooms in an open field to provide adequate cucumber fruit pollination. The bumble bees were going elsewhere. The bumble bee colonies lasted about one cucumber bloom period.

Four 10-foot subplots were randomly selected from different rows in two cucumber fields; one with honey bee hives and another with bumble bee colonies. Plots were harvested twice weekly for two weeks (20 – 30 Jun). Cucumbers were graded into Fancy and No. 1 and pollination culls; numbers in each category and weights of each category were recorded.

These data are not analyzed, but I would not expect any difference. To analyze, you would transform to arc sine square roots, but I felt it unnecessary. Obviously, since bumble bee sightings were so few, other pollinators were doing the job. The outcome of this study shows that there were no significant differences (?=0.05) in either marketable yield or number of cucumbers nor yield or number of culls (due to pollination). Also, although unanalyzed, the percentage of pollination culls was almost identical when averaged over all harvest dates.

Collecting the test harvest in the upper “honey bee” field 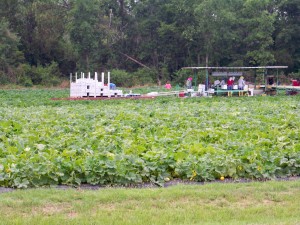 Typical harvesting methods in a squash field. This was the way the cucumber fields were picked on a commercial basis.

Planting and harvesting cost between the two fields were basically the same except for the variable cost of honey bees and bumble bees. Hence, the financial analysis focuses on the variable bee cost with respect to the yield. Yield data for one to 1.5 honey bee colonies per acre from previous years was not available.

This research will assess the value of bumble bees (Bombus impatiens), in addition to honey bees, for pollination of cucumbers in the Lexington, SC area. We will be comparing fields pollinated with introduced honey bee colonies to fields with introduced bumble bee colonies. We know that in both cases there will be pollination from extraneous pollinators that we did not introduce, but we assume that it will be either negligible or equal and our differences will come from differential pollination efficiencies of our introduced pollinators.

It is proposed that one 2-5 acre field be pollinated with three honey bee colonies per acre (approximately 20,000 – 30,000 honey bees per colony), and one 2-5 acre field be pollinated by four bumble bee colonies per hectare (one hectare = 2.4711 acres). The yields from the two fields will be assessed to determine the difference between honey bee pollination and bumble bee pollination. Previously, 1.5 honey bee colonies were utilized rather than three honey bee colonies. Recent reports indicate the production value of 3 honey bee colonies per acre rather than one. (http://www.extento.hawaii.edu/kbase/reports/cucumber_prod.htm). The same cucumber variety will be planted within days of each other in the early May time frame, in anticipation of pollination and picking the end of May to first part of June. We will be assessing the use of bumble bees as compared to honey bees, and a doubling of honey bee colonies.
Objectives/Performance TargetsCucumbers: Honey bee hives and bumble bee colonies will be moved into the field when there is 15-20% bloom (2). Pollination will continue for about a week prior to harvesting. Flowers pollinated less than two hours prior to overhead irrigation fail to produce fruit if water enters the corolla. In addition, it will be determined the length of time that a bumble bee nest is strong enough to provide adequate pollination services, i.e. how many crops. Bombus impatiens recommendations indicate they should last approximately 8 weeks.

In 2- 5 acre fields (this is the minimum size field that is economically viable due to the size of the farmer’s equipment):

Bumble bees will be placed in cool, shaded locations around field #2 at a density of 4 bumble bee colonies per 2.5 acres. The two fields will be located approximately 2-3 miles apart. Three subplots of similar size will be established in each of the fields.

The bee visits and yields from the subplots in each field will be recorded. One person will be hired to count the honey bee visits and bumble bee visits for each field, for a total of two people for two fields over the crop blooming period. Ten flowers will be watched for 10 minutes and the number of honey bees and bumble bees visiting the blooms will be counted. This will be repeated with different flowers for a total of 30 minutes of counting per field. Thirty minutes of counting will occur each day for one week after the honey bees and bumble bees are moved into the field. The following table will be consulted (2) to determine adequate bloom bee visits for cucumbers ( this table was generated in Michigan and may be different for the Lexington, SC area, i.e. bees typically do not visit booms in the middle of the day due to the heat but they still need approximately 10-15 bee visits per bloom per day) :

The cucumbers from each plot will be counted, weighed, and graded based on current grading standards. A comparison of the mean yields and their variances from the two fields will be conducted. Based on the statistical analysis, a financial analysis looking at the yields with respect to the variable cost will be conducted to determine the payback for just honey bees, and just bumble bees.