Our project sought to address the following questions:

1. Given a standardized ration and environmental conditions, what is the input cost comparison between GMO-free and conventional feed to pasture raise Cornish cross broilers?
2. Given a standardized hatch to slaughter timeline (seven weeks), how does the dressed weight compare between these treatment groups?
3. Are consumers willing to pay more at a farmer’s market for chickens raised on GMO-free feed?

We originally proposed to conduct three trials of 50 chicks each, with 25 chicks on conventional feed and 25 on GMO-free. Ultimately we decided to run four trials of 150 birds, with 75 birds in each group. Due to problems with the two of the trials we are reporting of the results of two of the trials, # 1 and #3, with discussion of all of the trials.

We modified our original objectives to increase the total sample size for the experiment. Objectives and performance targets are as follow: 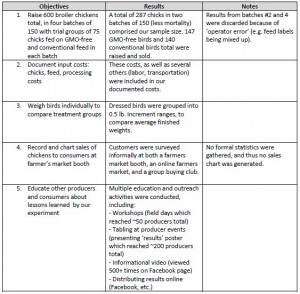