Understanding the biology of beneficial insects in agricultural landscapes for the development of conservation biological control schemes is an understudied area of research that is of vast importance. Hover flies (family Syrphidae) uniquely provide multiple beneficial services for growers during different life stages. Adults are important pollinators of several crops while many larvae are voracious predators of soft-bodied insects like aphids. While most research focuses on attracting adult hover flies and other natural enemies to agricultural landscapes during the growing season, little work has explored methods to retain populations over the winter, which is critical for controlling early aphid outbreaks in the spring. This project is exploring hover fly winter survival strategies and developing methods for predicting and enhancing their prevalence in the landscape during the spring. This knowledge is of substantial interest to growers as it reduces wasted resources spent seeking control measures during the growing season. Using a combination of field observations and lab experiments, three objectives were addressed to investigate two key aspects of hover fly winter behavior: migration and diapause. Objective one was to use stable isotope analysis to determine if hover flies migrate south in the fall to avoid winter temperatures. Objective two was to use a series of laboratory experiments to determine the lower temperature survival thresholds of three common hover fly species, allowing predictions as to their ability to survive winter conditions. Finally, the third objective was to determine whether diapausing hover flies and other beneficial arthropods preferentially overwinter within cultivated fields or managed field margins. The results of these three objectives are presented below.

Hover flies (Family Syrphidae) play multiple key roles in agricultural systems, serving as important pollinators as adults (Orford et al. 2015) and voracious predators as larvae, controlling aphids on a variety of crops (Bugg et al. 2008). They are among the most important predators of aphids feeding on Michigan winter wheat (Safarzoda et al. 2014), lettuce (Nelson et al. 2012), and soybean (Noma and Brewer 2008), consuming as many as 20 aphids in 15 minutes (Rotherey 1983). Current conservation biological control schemes that utilize hover flies focus on attracting adults using flowers (Colley and Luna 2000), weedstrips (Frank 1999), aphid pheromones (Verheggen et al. 2008), and hedgerows (Wratten et al. 2003). However, these studies often fail to discuss retaining populations over the winter, which is critical to ensuring eggs are laid early in the spring when aphid populations are low and more easily controlled (Safarzoda et al. 2014). Understanding the winter strategies of hover flies is key to retaining them in the landscape, providing efficient and cost-effective pest control.

In response to onset of winter, many insects seek shelter in dirt and dead vegetation where they enter a state of dormancy known as diapause (Hondelmann and Poehling 2007) and remain until conditions become favorable in the spring. Many aspects of this strategy in hover flies, however, are poorly understood. It is not known which life stages enter diapause, where in agricultural landscapes they do this, what cues cause them to emerge, and what temperatures ensure survival, all of which are important for predicting abundances in the spring. It is possible, for example, that if winter temperatures are less harsh, more individuals will survive and thus provide better aphid control in the spring. Additionally, if hover flies prefer to diapause within fields, agricultural practices such as tilling could be timed to allow for higher survival. As an alternative to diapause, some hover flies may migrate in response to winter cues, which could significantly affect the source of hover flies on a year-to-year basis.

A subset of individuals for some hover fly populations may migrate in response to decreasing temperatures rather than enter diapause immediately (Ouin et al. 2011). Although migrations of hover flies were observed in Europe (Aubert et al. 1976), little is known about the migrations of North American hover flies and the consequences for pest suppression. Migrations may provide an opportunity for farmers to boost hover fly populations before winter by attracting migrating individuals using fall-flowering plants and providing overwintering habitat. This is of particular benefit to farmers as migrating adult individuals likely emerge earlier than individuals that diapause as pupae or larvae, making them important for stopping aphid outbreaks early. No studies to date, however, have investigated the mass migrations of North American hover flies, although field observations suggest some hover flies exhibit this behavior (Skevington 2016). Knowledge of this unique winter survival strategy, therefore, is critical in designing conservation biocontrol schemes.

The purpose of this project is to investigate two key strategies that hover flies use to survive the winter, which are important for controlling pest populations in the spring: migration and diapause. The three major objectives (see also Figure 1) are as follows: 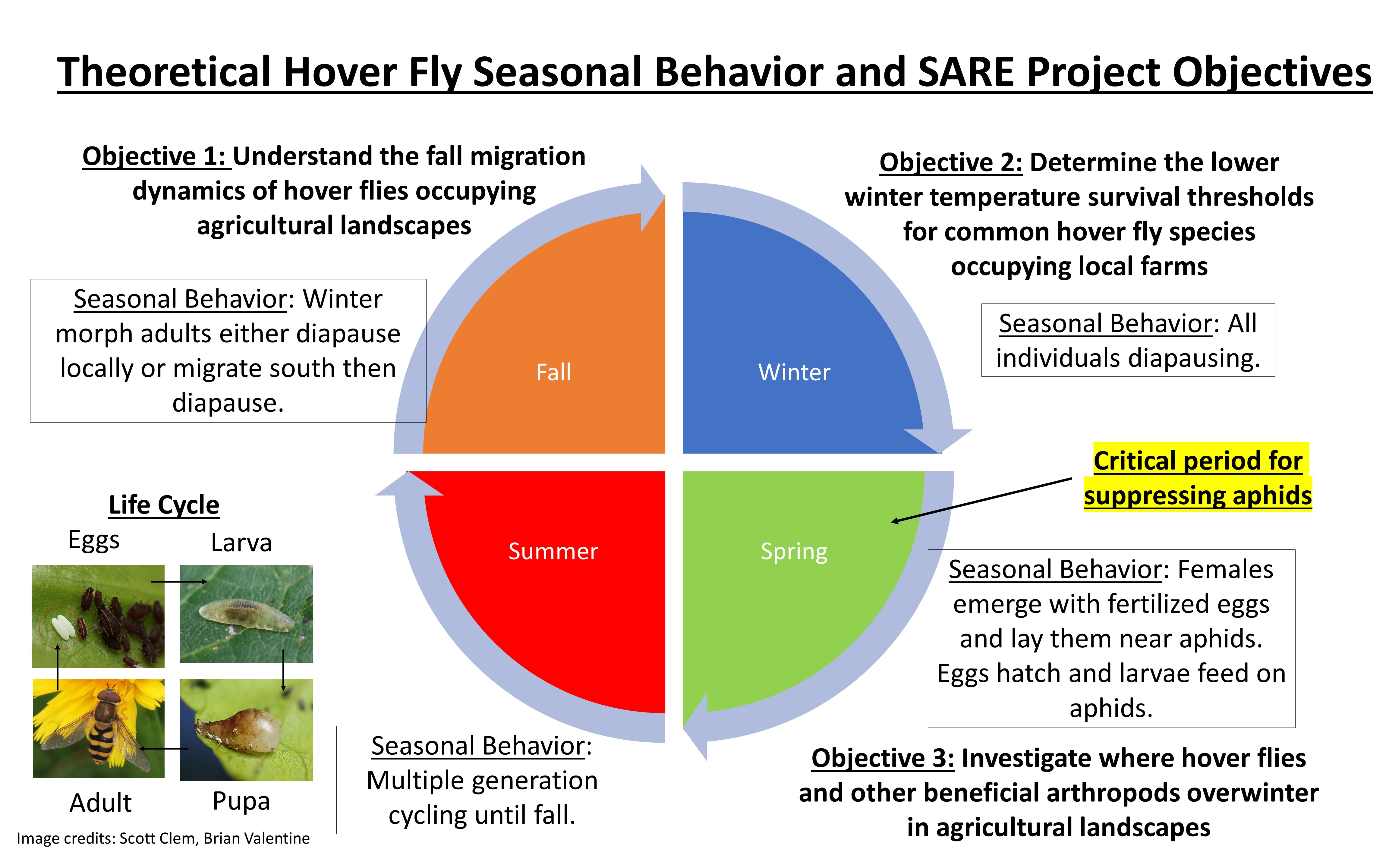