The overall goal of the project was to improve the productivity and environmental sustainability of specialty crop production by evaluating biodegradable plastic mulch as an alternative to polyethylene-based plastic mulch.

Objective 2: Determine the effects of biodegradable plastic mulches on agroecosystems

Field experiments (Figure 1) were established in May 2016 to evaluate the performance of biodegradable plastic mulches under pie pumpkin (Cucurbita pepo L.) production at two distinct environments in the US: hot humid (East Tennessee Research and Education Center, Knoxville, TN) and cool humid (Northwestern Washington Research and Extension Center, Mount Vernon, WA). The treatments constituted four biodegradable plastic mulches (BioAgri, PLA/PHA, Naturecycle, and Organix), and then bare ground, paper mulch, and polyethylene mulch, which served as control. The mulches were mechanically installed on raised beds of 0.2 m high, 0.8 m wide and 11 m long. Each treatment plot consisted of five raised beds with a 1.6 m buffer between each bed. The treatments were arranged in a randomized complete block design with four replications.

Pumpkin was transplanted or direct seeded as per grower practices at Mt Vernon, WA and Knoxville, TN, respectively. The plants were provided with supplemental water by drip irrigation.  Irrigation was triggered when the water content at 20 cm depth in the polyethylene mulch plots dropped below 0.16 m3/m3. Total nutrient application (initial soil test amount + quantity added) was 114 kg/ha for nitrogen and 112 kg/ha each for phosphorus and potassium. Pumpkins were harvested at maturity in September.

Soil temperature and moisture sensors were installed at 10 cm and 20 cm depth. Hourly data were recorded with Decagon data loggers. Also, hourly weather data (precipitation, atmospheric temperature, solar radiation, wind speed, and relative humidity) were collected within each field experiment from adjacent weather stations. Light penetration through mulch was also monitored with sensors placed directly underneath the mulch treatments. The weather and soil data are being used to develop a 2-dimensional Hydrus model to predict soil water flow under the different mulch treatments. 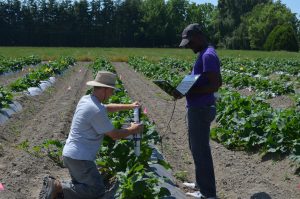 Figure 1. A field experiment with biodegradable mulches and pumpkins in Mount Vernon, WA.

From this first field season, we have obtained preliminary results, which are being analyzed in more detail in the next few months. Most of the biodegradable plastic mulches remained intact even at the time of harvest, except Naturecycle, which underwent significant premature breakdown. There was no difference in pumpkin yield among the mulch products in Knoxville, but significant differences were observed in Mount Vernon. There was no significant yield difference between the biodegradable plastic mulches, and their yield was similar to the polyethylene mulch but greater than the bare ground and paper mulch. The mulch treatments impacted soil water content and temperature, but the effects were more pronounced in Mount Vernon than in Knoxville. In general, the plastic mulch treatments increased soil temperature over the bare ground and paper mulch during the early growing season. Also, soil water content was higher in the plastic mulch treatments compared to the bare ground and paper mulch (Figure 2). Light illuminance below the different plastic mulches was similar, and it was two orders of magnitude lower than the bare ground.

Objective 2: Determine the effects of biodegradable plastic mulches on agroecosystems

There was no significant difference in the measured soil quality parameters among the mulch treatments in the spring of 2016 at the two locations. Data of the fall 2016 soil quality assessment are yet to be statistically analyzed. Leachate samples were collected but have not yet been analyzed.

Degradation of the mulch treatments was assessed in two conditions (soil and compost). For soil evaluation, field-weathered mulch samples from the plots after harvest were cut into approximately 10 cm x 12 cm sizes. They were then photographed and placed into 12 cm x 14 cm white nylon mesh bags with 250 µm openings. The mesh bags were buried in their respective plots at 10 cm depth. They are to be retrieved in 6-month intervals for nano-scale assessment of mulch degradation.

To evaluate mulch degradation in compost, we collected field-weathered mulch samples and also placed them into mesh bags.  The mesh bags were then placed at 60 cm depth into a compost pile. The compost was prepared in October as aerated static pile using yard wastes, dairy manure solids, broiler litter, and fish carcasses to obtain C: N ratio of 25-30:1 and 55-65 % moisture content. The compost temperature was monitored continuously by means of sensors placed at various locations within the pile. The mesh bags are being retrieved at 2-week intervals for a total of 18-weeks. Degradation will be quantified by image analysis, scanning electron microscopy, electrophoretic mobility, organic carbon analysis, and FTIR.

Mulch samples from mesh bags are currently being analyzed with the ImageJ software and data are being processed for interpretation. Composting is still ongoing and will be completed beginning of March 2017. The degradation rate of the biodegradable plastic mulch in compost is fairly high: there was >90% disintegration within 12 weeks of composting.

With the help of Washington State University extension scientists, a pool of producers has been identified and they will be engaged throughout the entire duration of the project. Plans to organize a field day to orient and inform producers on composting and use of biodegradable mulches are under way.

Notes: We would like to acknowledge team members of USDA SCRI Project No. 2014-51181-22382 for their contribution towards this project.