This project emerged from a collaboration among four Iowa food hubs and ten farmers that began in 2014.  This network demonstrated the potential of shared warehousing and transportation for improving logistics efficiency and increasing the volume of regionally-produced food that can be distributed throughout the state.  However, as the participants sought to add more nodes (i.e., farmers) to their network, the challenges of inadequate physical and information infrastructures became apparent.  In particular, it was very difficult for them to track inventory movement among the nodes each week.  This lack of information has lead to sub-optimal system-wide logistics. Additionally, the food hub managers lacked a systematic method for allocating and tracking the costs of shared physical infrastructure and warehousing services, which is necessary for successful and sustained collaboration.

In the last year, we have researched, developed, piloted and began to implement the necessary infrastructure/tools to support this supply chain and accommodate future growth. To accomplish this, we have developed an automated label generated system for farms to label boxes, coolers, bags, etc to ensure that product gets delivered to the appropriate food hub. A mobile and desktop app have also been developed for food hub managers and farms to use to track shipments, track mistakes, and the number of boxes or cases of product moved throughout the distribution network.  These systems and tools are showing the potential of an inventory management system that will enable information sharing across multiple farms and food hubs and support a growing distribution network across Iowa.

In the last year as we researched, developed, tested and began implementing the inventory management system we partnered with several farms and food hubs over conference calls, at in person meetings and one on one at their food hub or farm.

After developing the label scheme Dr. Krecji’s team began to develop an automated label generating system using an excel database and a Brother Label printer. Farmers can input the number of boxes they have and what food hub is its final destination. The label generator speaks with the label printer and quickly outputs labels at a low price.

Simultaneously while the label generating system was being developed an app using google servers and open source software was developed to track and manage inventory moving through the network. The app has been test and piloted with a food hub and their truck drivers. In March the coordinating food hubs will begin using the app and label generating software every two weeks when shipments are coordinated.

Once the app has been fully tested and put into place the app will begin to allow the coordinated food hubs to run reports to determine the true cost of the number of cases shipped throughout the network.

At the unset of this project, it was hopeful to be able to implement barcodes and scanning systems into the labeling and tracking app. It was determined after research of available technology it would not be cost effective to implement scanning technology. In the first version of the app and labeling scheme, food hubs will enter deliveries and items received using drop downs and buttons on mobile devices and on a desktop app.

The following accomplishments/milestones have been achieved during the first year of the project.

Krejci will administer a pre-project questionnaire to project participants to assess:

Dr Krejci and her team administered a survey of food hub managers in the fall of 2016 to survey the food hubs on their process of receiving and managing inventory at their locations.

The Iowa Valley Food Co-op will purchase a pallet jack and dock ramp and will incorporate this equipment into their logistics activities and reduce handling time.

Iowa Valley Food Co-op purchased a pallet jack and dock ramp to assist in material handling when they received deliveries from the Iowa Food Hub and Farmtable Delivery. The pallet jack allowed them to move the two pallets that regularly came off the Iowa Food Hub truck and then to reload the Farmtable Delivery truck the following day.  The dock ramp increased efficiency and strain on staff when loading the Farmtable Delivery truck. Farmtable’s truck has steps on the back and does not allow it to back up to a dock and roll product on and off. The dock ramp bridged gap allowing a pallet track to move product across the gap between the dock and truck.

Leverage funding from an ongoing project for the Leopold Center for Sustainable Agriculture (LCSA), Dr. Krejci and her graduate student will perform background research to establish methods for allocating costs of shared infrastructure across the supply network and to select and develop an inventory management system. 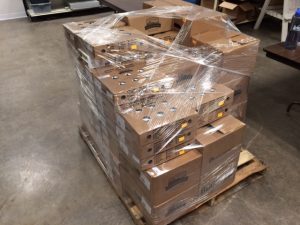 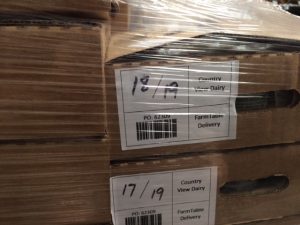 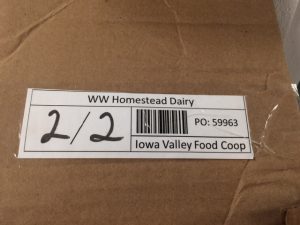 The project team then developed an Excel-based interface to be used by the farmers for generating the labels (in the same finalized format from the pilot runs) using standard label printers. A document describing guidelines for the label generation process have also been prepared. This automated Excel-based labeling interface has been installed and successfully piloted with one farmer (Country View Dairy) in the second week of February 2017.

Besides developing standard labeling and packaging guidelines, the research team is also currently in the process of developing a mobile application (which can be used on iOS and Android-based smartphones and tablets) and a desktop interface that will enable the farmers and the food hubs to track the movements of products in real time, as they are transported from producers to food hubs across Iowa. The overall idea behind the development is to keep the system low-cost and easily maintainable by the food hub managers.

In order to fairly allocate collaboration costs among the food hubs and farmers, accurate data on duration of temporary warehousing of products at various nodes and transportation time and distances is needed. This data will be collected after the labeling interface and the mobile app have been fully implemented, and it will be used to devise a cost-allocation mechanism for the system participants.

Dr. Krejci and Jason Grimm held conference calls and exchanged emails with two groups of food hubs in the fall of 2016. In October, a conference call was held with Appalachian Sustainable Development. Their food hub was interested in this project as they are putting necessary procedures in place to track deliveries and pickups of produce from farmers along multiple routes on the east coast. They are interested in seeing the app developed from this project and if they could use it in their business.

In December Dr. Krejci and Jason Grimm held a conference call with the Center for Regional Food Systems at Michigan State. Rick Pirog and Noel Bielaczyc told us about the Michigan food hub network that they assist in coordinating. They reached out to their network and Cherry Capital Foods and Eastern Market in Michigan expressed interest in traveling to Iowa to consult with our foods and network and learn about our food hub network in Iowa. Jason Grimm and Kayla Koether who coordinate the Iowa Food Hub Managers Working Group are currently organizing plans for April to bring Cherry Captial Foods, Eastern Market and some staff from Michigan State to Iowa for two days.

The team will write a report to document preliminary findings, to be shared at the Iowa Food Hub Managers’ Working Group (FHMWG) quarterly meeting.

Since the beginning of the project presentations have been made at all the meetings of the Iowa Food Hub Managers Working Group in 2016. Meetings were held in Harlan, Cedar Rapids, Davenport and Mason City in 2016. Project staff presented to all the food hub managers in attendance during this meeting present updates about the project. 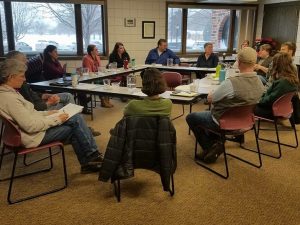 The selected consultant(s) will travel to Iowa for a two-day site visit to all participating farms and food hubs to assess the current collaborative network structure and operations, and to provide recommendations.

Jason Grimm and Kayla Koether who coordinate the Iowa Food Hub Managers Working Group are currently organizing plans for April to bring Cherry Capital Foods, Eastern Market and some staff from Michigan State to Iowa for two days. The two days will include traveling between the different food hubs who are coordinating the shared transportation systems.

Based on consultant feedback and Dr. Krejci’s research results, an inventory management system will be designed and proposed to project participants.

The beta version of the Excel-based labeling interface (Figure 1 and Figure 2 below) has been successfully piloted with one of the participating producers (Country View Dairy) in the second week of February 2017. Pilot test of the mobile app (Figure 3 and Figure 4 below) is scheduled in the third week of March 2017. 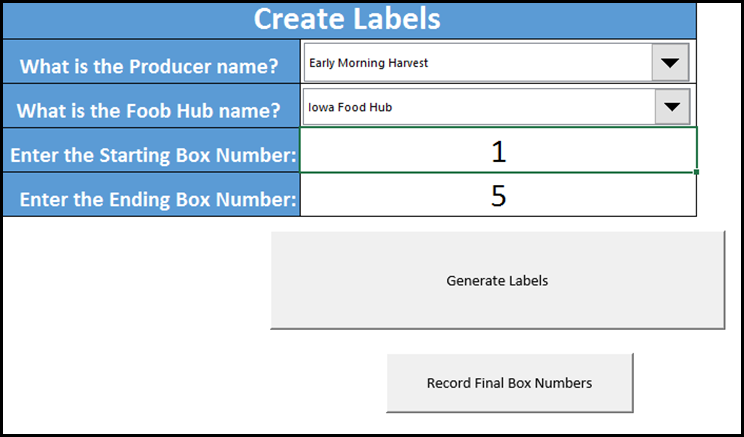 Figure 2: Screenshot of labels being generated from the Excel-based labeling interface 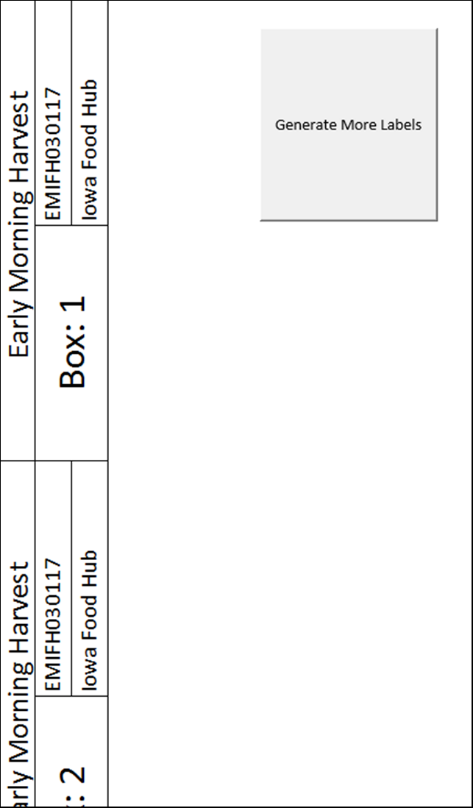 Figure 3 & 4: Snapshot of the mobile app developed for tracking the movements of the products in real time 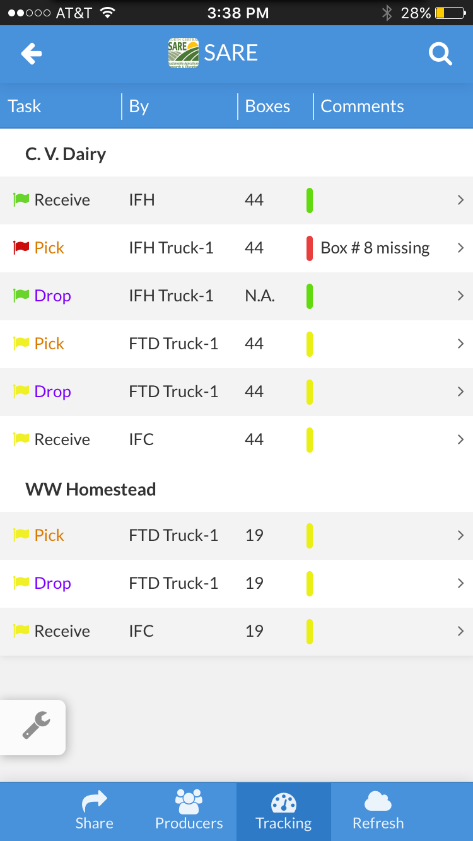 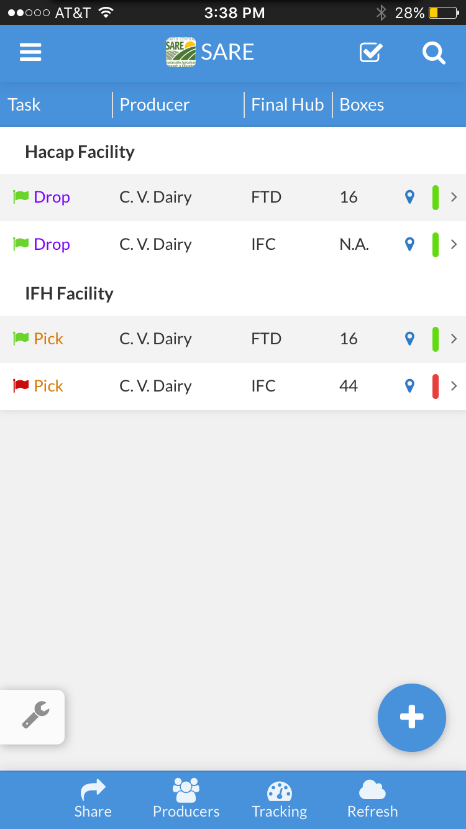 Label printers, cartridges, and label materials have been purchased and delivered to the participating farmers. The mobile application has been built using the trial version of the AppSheet software. The full version of the software and all the necessary server space required to run the app will be purchased in March 2017.

Dr. Krejci will train one participating farmer and all four food hub managers on the new system, which they will incorporate as a pilot study.

The project’s inventory management system and labeling protocols have already had positive impacts on the participating food hubs and farmers who are collaborating in the transportation network. While piloting and testing the labeling scheme during the summer of 2017 the labels ensured that, the proper boxes were delivered to Iowa Food Co-op several times. Staff who received the orders caught mistakes several times before the truck driver left their location.

The project has helped to improve communication between the food hubs and have improved the understanding of peers food hub operations and sales patterns. This has improved mutual support for each others well-beings.

After the mobile app has been implemented throughout the network during the next several months, it is expected the project will only increase the impact and provide new data and tools to improve the food hubs and farms’ efficiency and sales.