The invasive Brown Marmorated Stink Bug Halyomorpha halys (BMSB) continues to be a high-risk insect pest of tree fruit crops. The physical size, feeding habit, use of primary host resource for food and habitat and broad alternate host infestation all contribute to the BMSB pest status. The greatest impact from the insect is in injuring late-season fruit and vegetable to reduce marketable yields. BMSB is primarily arboreal, moving from forest edge into fruit during two periods of the season. The insect highly prefers peach during early fruit development while migrating to apple particularly towards the latter part of the season to feed, prior to moving on to overwintering sites in early to late fall.

This study focused on employing wooded edge perimeter trapping as a monitoring tool to predict BMSB presence and subsequent trap threshold for management decision-making. Upon reaching a 10 weekly adult threshold in orchard edge trap, a perimeter application would be made in place of whole orchard or alternate row applications. In 2016, very low BMSB populations in our primary project sites were observed (2016 BMSB Pheromone Trap Data in NYS below.). This was also found in most regional tree fruit sites warranting application restraint. To this end we employed a secondary site for this study (Liberty Orchard), where populations exceeded threshold (Highland trap site), employing threshold in late August for border management. Employment of two border applications of Bifenthrin EC (Bifenthrin) plus Assail 30WG (acetamiprid), used for apple maggot management throughout the two blocks, compared to the neonicotinoid insecticide Assail 30WG alone, resulted in statistically significant higher BMSB control throughout the entire block when compared to the adjacent blocks treated with Assail. 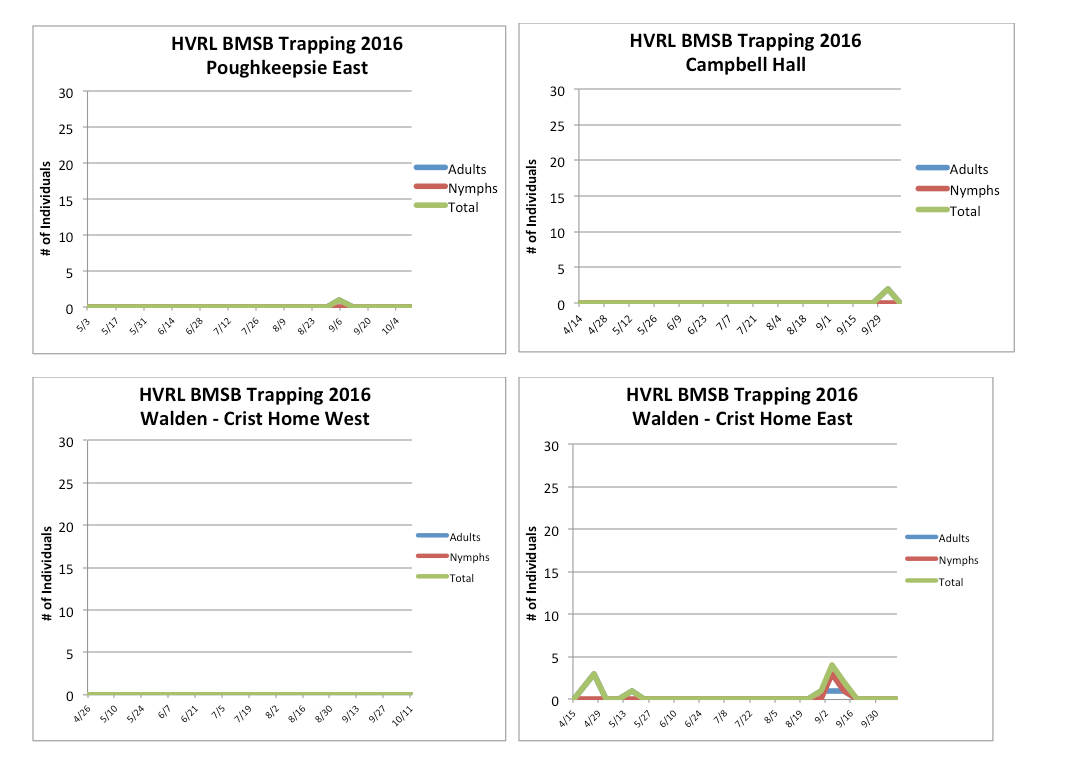 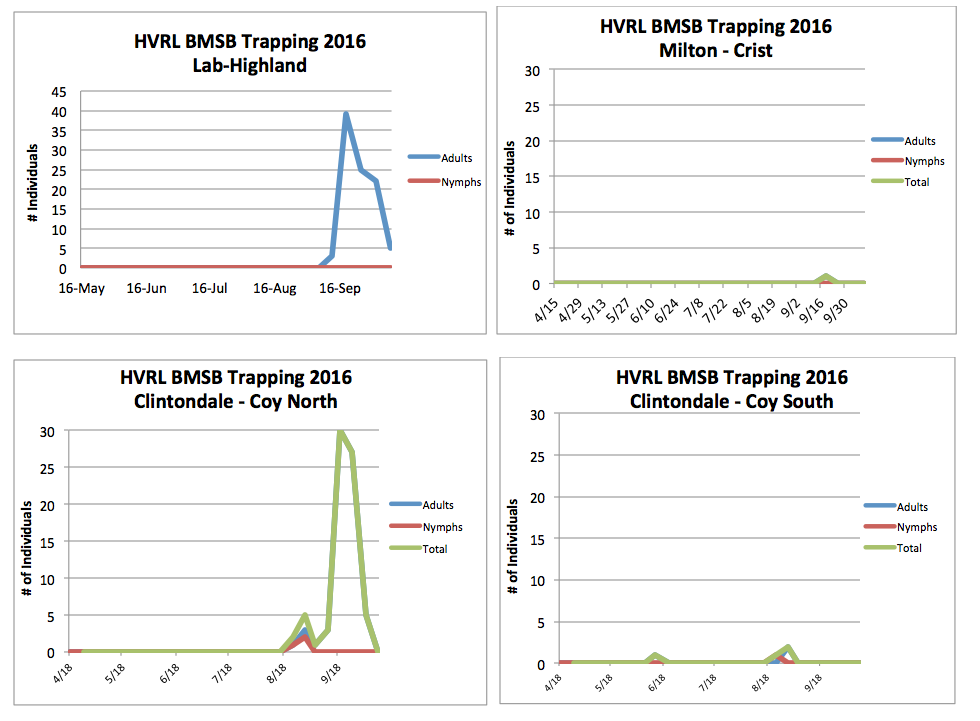 In 2012, BMSB were observed on late season fruit causing unprecedented injury to Red Delicious and Pink Lady apple varieties. Pheromone of BMSB had not yet been fully identified and developed for use to monitor populations for management. We employed the newly developed USDA #10 lure along with the brown-winged green bug, Plautia stali pheromone, methyl (2E,4E,6Z)-decatrienoate, to detect late season migratory populations of BMSB that year. We observed trap captures of adults moving from forest to late season pome fruit beginning to feed on and cause greatest damage to apple bordering deciduous edges (Image 1). From this experience and research from the mid-Atlantic, fruit damage was found to be highest in years when populations are present in high numbers, above current thresholds, with perimeter fruit exceeding 90% and interior fruit injury reaching or exceeding 10%. The study objective was to determine the efficacy of orchard border applications to sufficiently protect border and interior fruit from late season BMSB infestations to apple. 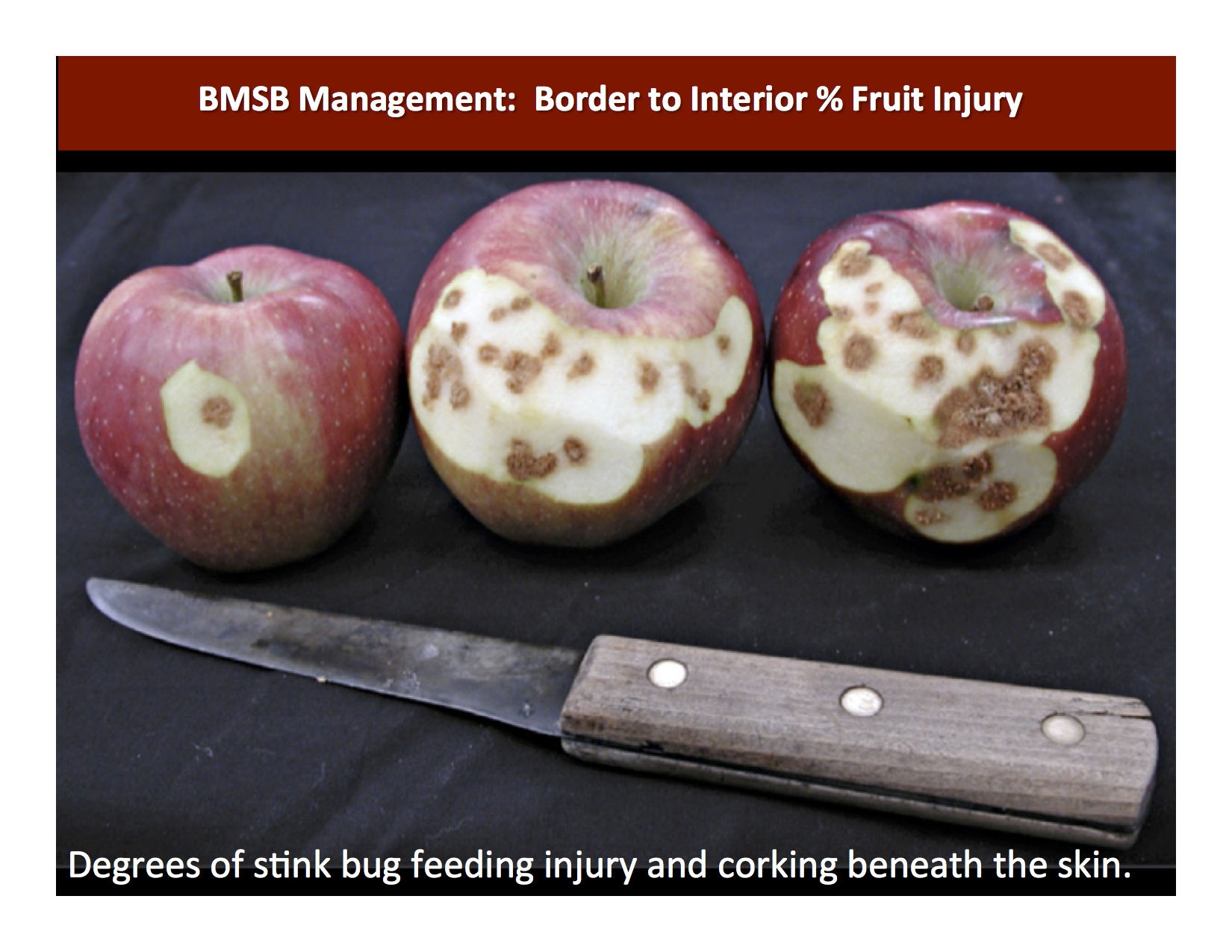 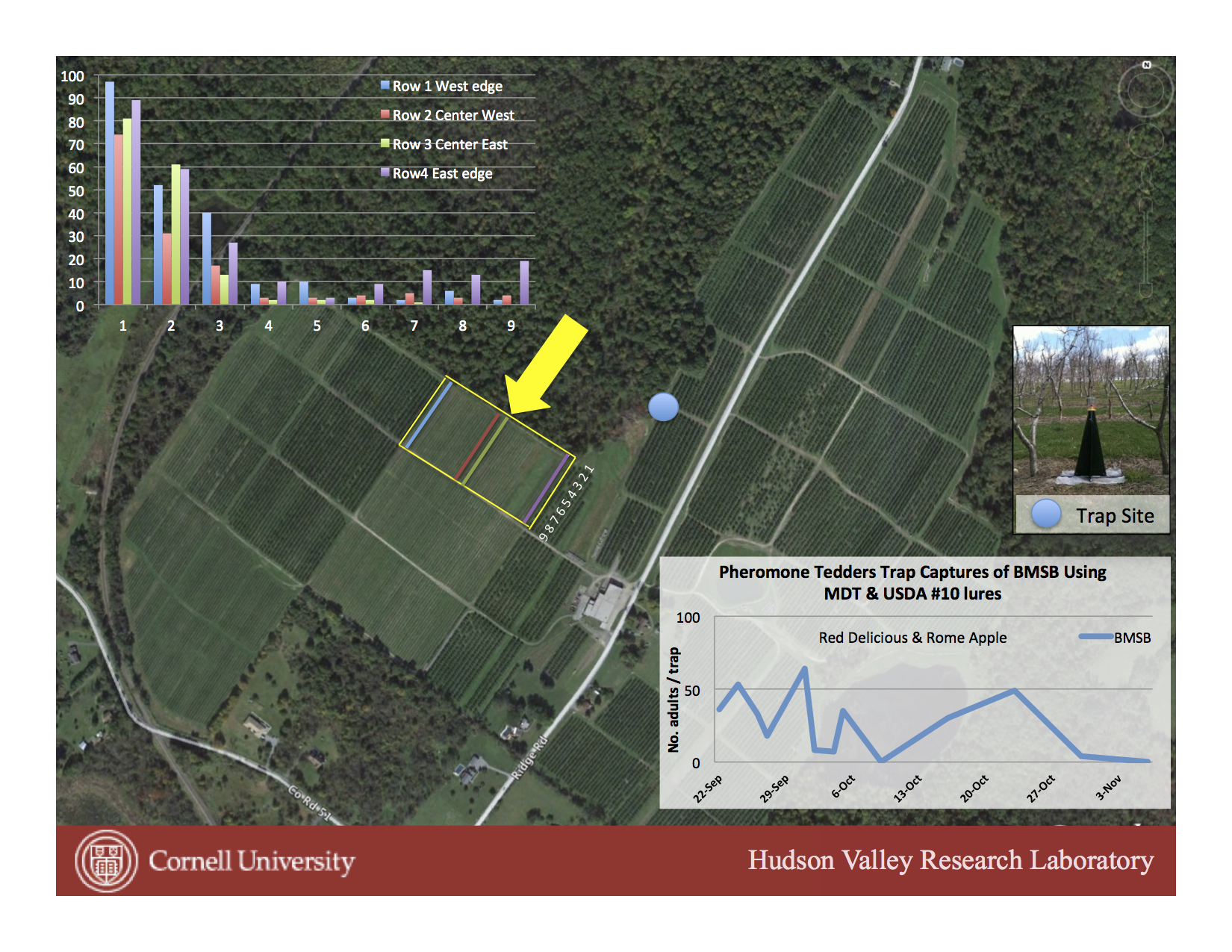 To confirm the benefits of border applications for BMSB management, on-tree ratings were performed in two treatment blocks of mature, 45 year old apple on M-7 rootstock, 15’ high at 25’ drive row spacing and 15’ in row tree spacing. In the western portion of a 50-acre orchard, a 30-acre block of trees was divided into two 15-acre blocks. These consisted of a Southwestern block which received two perimeter applications of Bifenthrin EC at 12.8 fl.oz. /A upon trap threshold of 10 BMSB adults per week. Two wooded edges along the South and West of approximately 22 rows or 550’ along the Southern edge and 15 trees or 225’ along the Western edge. The insecticide Assail 30SG at 8.0 oz. /A was applied across the entire 30A block.

Fruit were rated from a single row in the middle of each block beginning with the outermost edge tree, alternating every other tree toward the middle of each of the two blocks. A total of 300 fruit per block was assessed, 150 from edge, and 150 from middle. Subsample assessments of 50 fruit were returned to the HVRL for microscope evaluation of depressions to confirm BMSB feeding sites. Fruit on each tree was sampled randomly from each quadrant at chest height within the canopy. Percent BMSB injury was calculated. Variability was stabilize, transformed using arcsine (Sqrt(x)) prior to analysis with mean separation by Fishers Protected LSD (P ≤ 0.05) with the arithmetic means reported. In Table 1, treatment means followed by the same letter are not significantly different. Stink bug injury in the Southern block was lower overall, while the edge three trees within 90’ of the edge treated with Bifenthrin and Assail, had significantly less stink bug damage than the edge of the North block in which Assail alone was used. The data indicate that edge sprays protect the edges and interior rows within the treated block. In Table 1, results also indicate that border applications protect against the general insect pest complex within the border treated block. 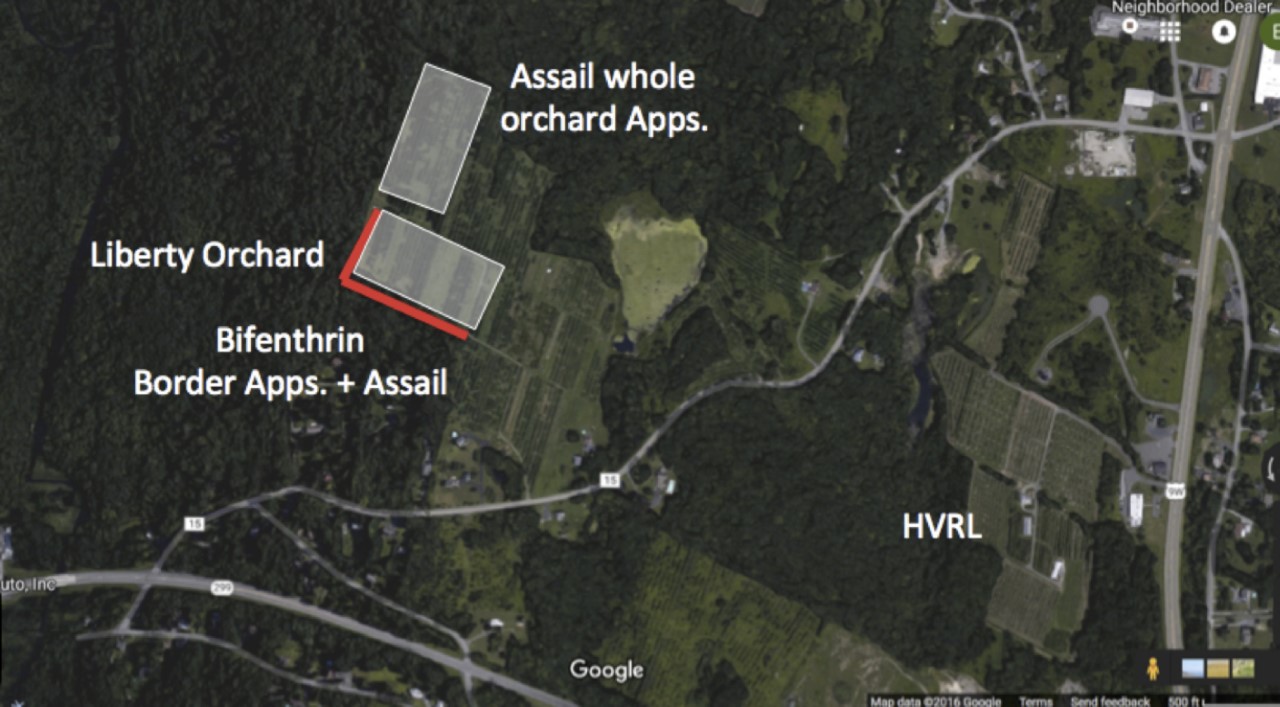 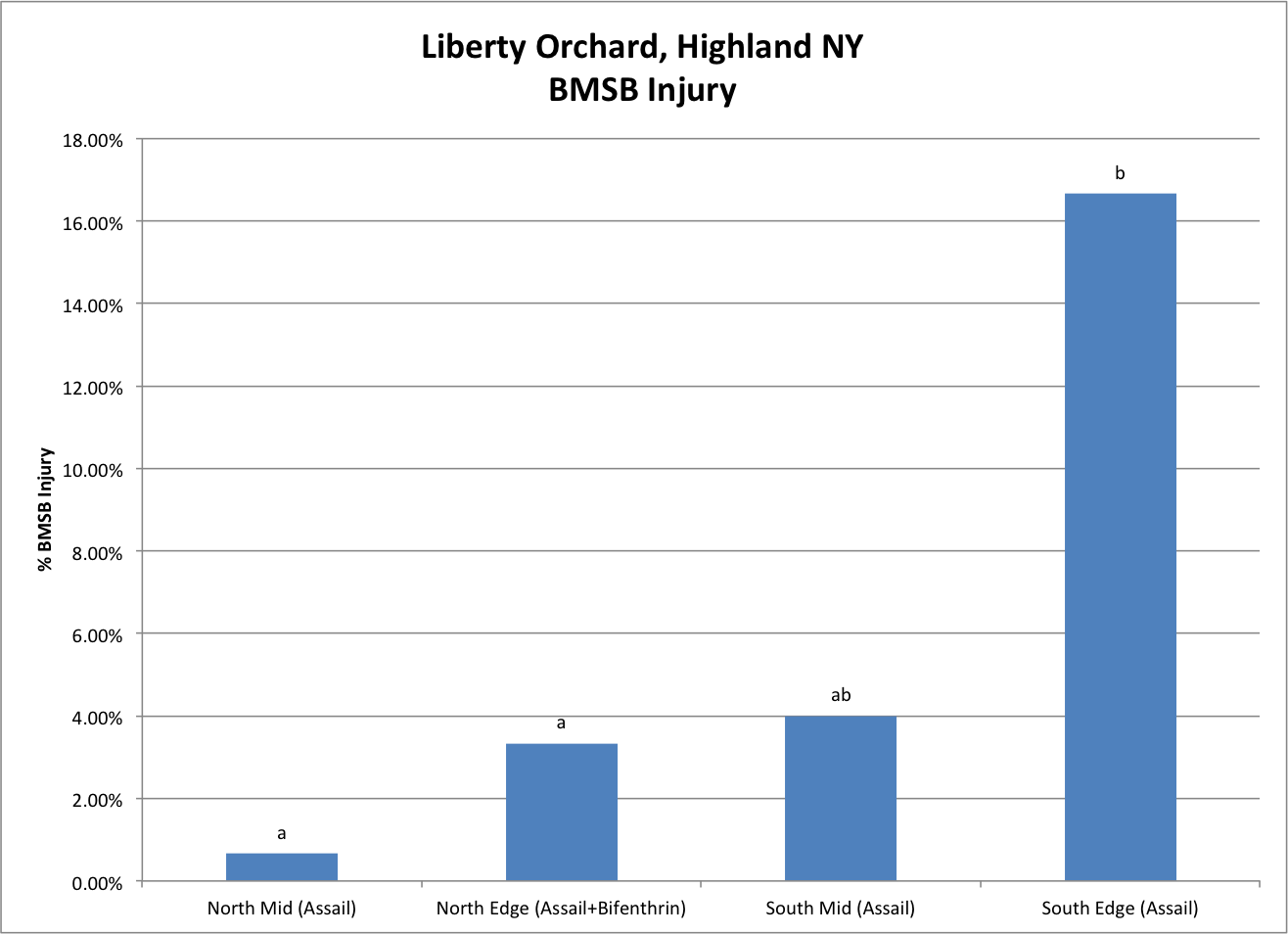 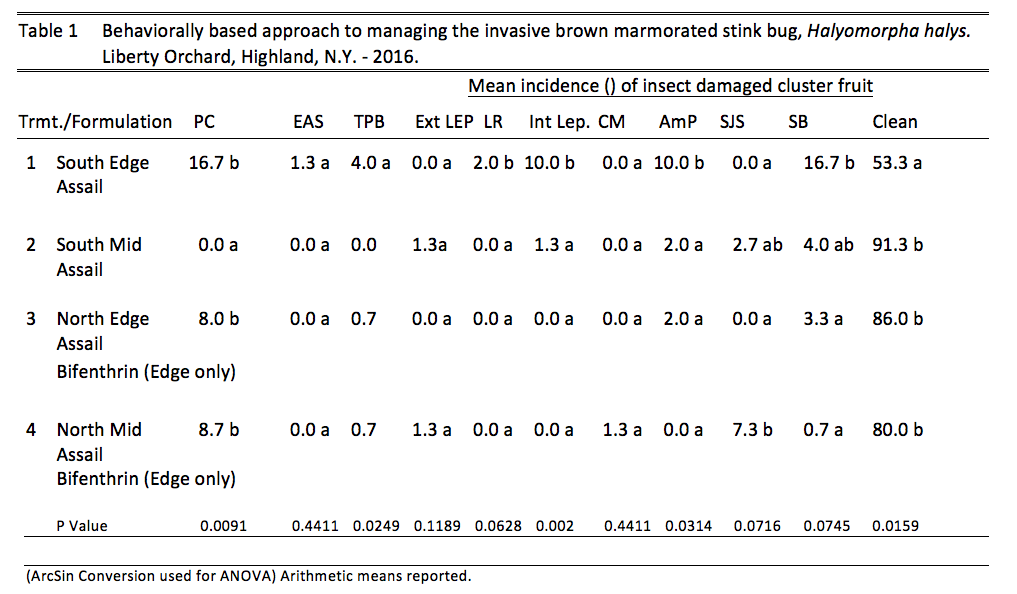 Generally, the pyrethroid group has broad-spectrum efficacy, strong insect repellency yet low residual activity for BMSB. As effective as some individual pyrethroids within the group may be, late season applications of a pyrethroid my exceed the MRL (minimum residual limit) for export to countries with very tight MRL restrictions. The use of pyrethroids, and specifically Bifenthrin across the entire orchard put greater load to fruit, especially under drought. Border applications for BMSB management, made to the wooded edge bordering orchards and hedgerows within the orchard where BMSB reside, will significantly reduce late season insecticide loading and reducing the residual of pyrethroids on late season fruit.

During this project the HVRL has provided web based on-demand information to alert tree fruit growers of BMSB activity throughout the state through blog emails to subscribers and updates to EDDMaps.org indicating BMSB in NYS counties. Variable economic impacts are provided to growers using this approach and are relative to seasonality of rainfall. In years with weekly late season rain events, the need for full orchard fungicide applications to control summer diseases will negate savings of border applications. However, during years of drought, fungicide applications are few, economizing the use of border applications. In a ten-acre block then, a 50-70% savings can be achieved using single or multiple, alternate-row, border applications.