The long-term goal of this project is to improve nitrogen fertilizer management on farms implementing biologically-intensive soil-building practices to grow diverse crops. Cover cropping and organic amendments contribute to the soil’s fertility beyond the year they were incorporated by building active organic matter. Through this participatory research we will be able to place dollar values on the importance of optimizing soil fertility. Growers will be able to more accurately estimate nitrogen mineralization from soil organic matter and adjust fertilizer applications up or down accordingly. Extensive outreach efforts will be used to directly reach over 200 growers in Washington and Oregon.

Field Trials: An experiment to assess nitrogen contribution from organic matter and the economic benefit of five different rates of fertilizer application was performed with 5 organic farms. Two farm sites were located near Royal City in central Washington (Sites 1-2) with a semi-arid climate. Three farm sites were located in western Washington (Sites 3-5) with a maritime climate.

Fertilizer rates were determined through interviews with cooperating farmers and by consulting broccoli production guides (farmers reported applying between 20 and 60 pounds total N per acre). At each farm, organic feather meal fertilizer (11%N, 0%P, 0%K) was applied at 0, 60, 120, 180, and 240 lbs N/acre in a randomized complete block design with 3 replications.

Certified organic broccoli transplants were prepared at a central location and transplanted following ground preparation and fertilizer application. Transplanting occurred in central Washington on 14 April 2016 and on in western Washington on 17 and 18 May 2016. Plant spacing was determined by individual farmers and was similar at sites 1,2,3, and 5. Site 4, the smallest farm, planted broccoli more densely. Weather stations were set up at each site to record air temperature for calculation of growing degree days.

Crop Yield and N uptake: Marketable broccoli yield was taken from each plot. Additionally, three adjacent broccoli plants from each replication of each treatment were destructively harvested and combined into a single sample and analyzed for biomass, total N and total C.

Statistical Analysis and Interpretation: The average of 3 field replications was calculated for bulk density, basic soil analyses, Haney tests, 7-day anaerobic NH4 incubation, and seasonal soil NO3 with EM Quant™ and lab test. The aerobic NO3 mineralization rate (lbs NO3 day-1) was calculated by fitting a linear model with nitrate mineralization versus days of incubation and averaging the rate across replications. Broccoli yield and above-ground biomass were fit to linear models for each site. The statistical significance of fertilizer effect was tested with analysis of variance and means were separated with Tukey’s HSD.

Despite the different climates, growing degree days (GDD7.2) were similar at sites 1-4 and ranged from 652 to 701. Site 5 required more days to reach first harvest and accumulated 802 GDD7.2 (Table 1). Site 5 was a silt loam while the other sites were sandy loam, fine sandy loam, or very fine sandy loam.

1The weather station at Site 2 was compromised, but GDD were likely similar to Site 1. GDD7.2=Growing Degree Days with base temperature of 7.2 C

Soil organic matter ranged from 2.0% to 7.7% and pH ranged from 5.8 to 7.8 (Table 2). Organic matter was higher and pH was lower in the soils from the western Washington maritime climate than in the soils from the semi-arid climate in central Washington. Tests to predict N mineralization were consistent in their ranking of the soil sites with the exception of Site 5. The Haney tests predicted greater N mineralization from Site 5 than Sites 1 and 2, while the aerobic and anaerobic incubations predicted less mineralization from that soil than Sites 1 and 2 (Table 3). The Solvita test and 7-day anaerobic incubation showed the greatest range of potential mineralization among soils.

At Site 1, broccoli transplants in several plots were completely lost to rodent damage, so Site 1 data was not included in above ground biomass or marketable yield analyses. Fertilizer rate had a significant effect (p<0.05) on above ground biomass at Sites 2 and 4, but not Site 3 or 5 (Figure 1). Fertilizer rate significantly affected marketable weight at Sites 2-5 (p<0.05; Figure 2). 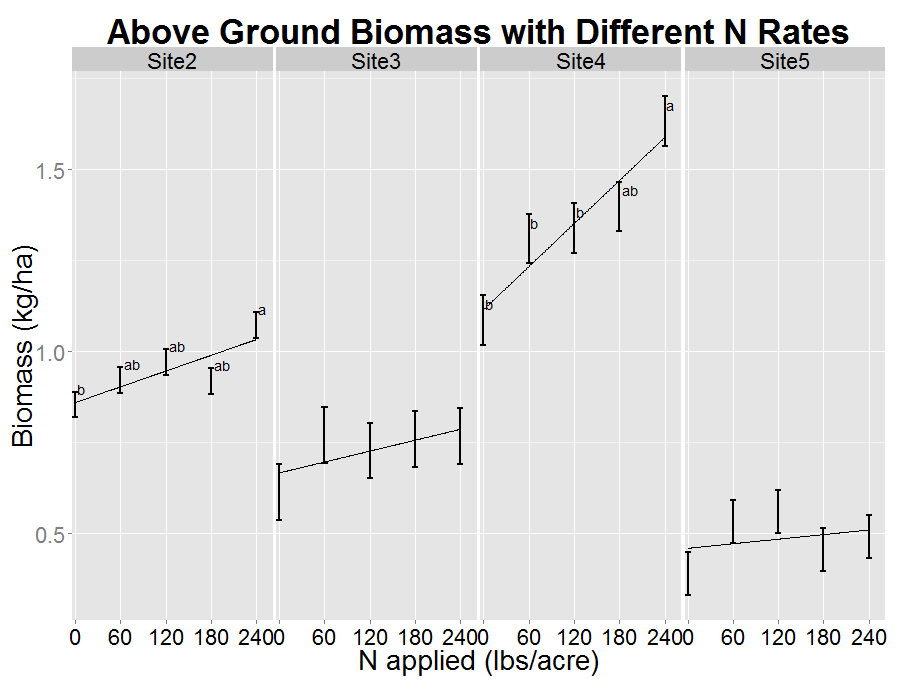 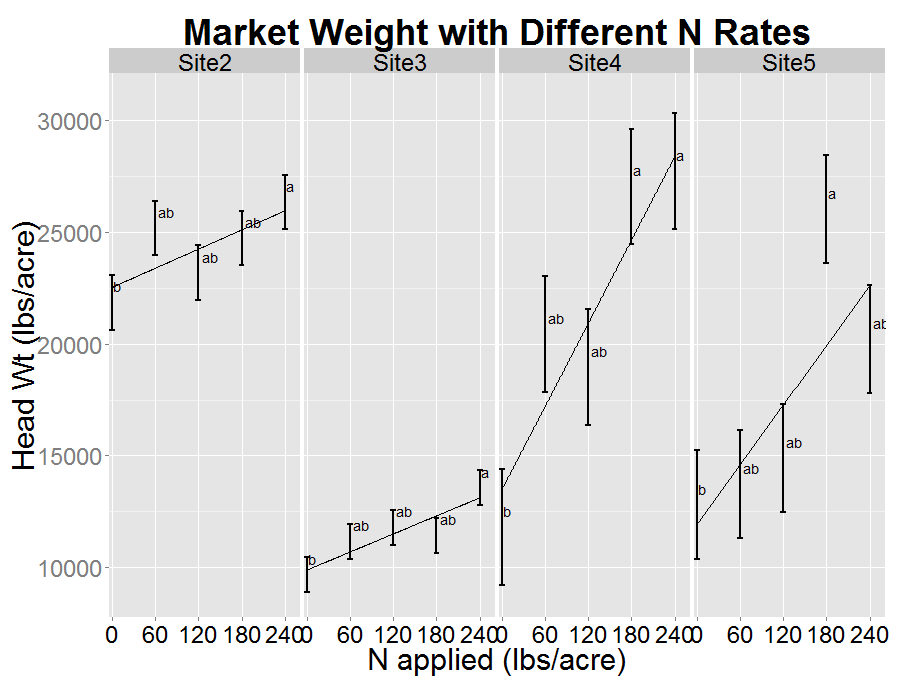 Figure 2. Market weight with different N rates. A linear model was the best fit for all sites and only Site 4 could be fit to a nonlinear logistic model, which is shown.

That a linear model fit best for market weight at all sites suggest that N was not applied at a high enough rate to find the rate where N availability did not limit market weight. However, fall soil nitrate levels are another indication of appropriate nitrogen application rate; leaving excess nitrate in the soil after harvest can degrade water quality. Soil nitrate at 30 ppm or greater is considered high and equates to about 105 lbs NO3-N a-1 . Sites 4 and 5 had excess nitrate in the soil with fertilizer application greater than 60 lbs N acre-1. These soil nitrate values are based on the EM Quant quick test and are being validated by laboratory analysis. Economic analysis is also underway and the experiment will be repeated in 2017. 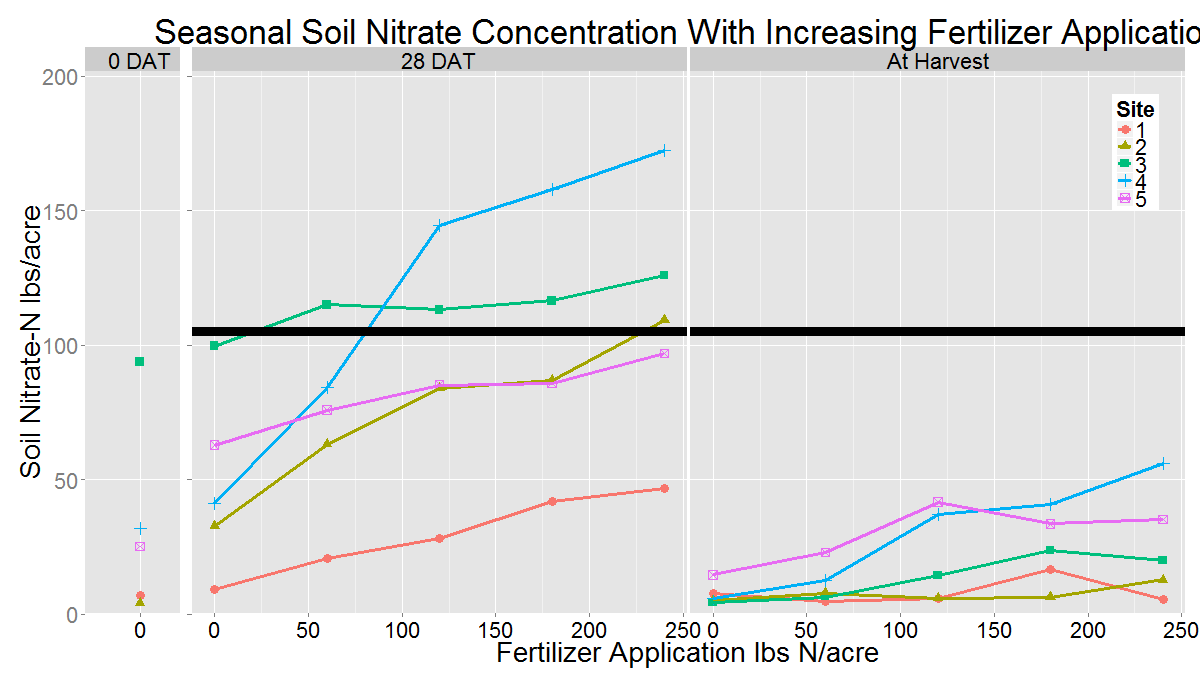 While broccoli yield significantly increased with fertilizer at all sites, the rate of increase varied. Sites 4 and 5 both had the steepest increases in broccoli production with increased fertilizer (62.1 and 44.5 lbs broccoli / lb fertilizer, respectively) (Table 4).

Of all of the predictive tests considered, aerobic incubation at 22 C had the strongest association with fertilizer effect on broccoli yield. Sites 4 and 5 were predicted to have the lowest N mineralization from organic matter and these were the two sites the largest rate of increase from fertilizer (Table 5).  Increased plant spacing may also explain the more pronounced fertilizer effect at site 4.