Throughout this two-year PDP project, we conducted five field trials with 6 collaborative farmers to evaluate insect damage on tomato, kale, zucchini, pumpkin and cucumber inside and outside of Do-it-yourself (DIY) screenhouses using 17-mesh insect exclusion nets. Four affordable DIY screenhouse designs using locally available materials were published. The participating farmers received one on one assistance from our team to install the screenhouse using affordable materials at their farms. Based on farmers’ requests, the screenhouse designs became progressively cheaper without compromising durability. Farmers’ testimonies and perception on managing insect pests using insect exclusion screenhouses are generally very positive. Along the way, the PIs recognized that the 17-mesh insect exclusion net did not exclude smaller sized soft body insects, and excluded some natural enemies, which lead to the need for integration of insecticide sprays to control soft body insects. Thus, another field trial was conducted to compare insect exclusion nets with different mesh sizes. While DIY screenhouse structures are suitable for higher value and small-scale crop production (cucumber, tomato etc), vegetable farmers that grow row crops like leafy green are complaining that all screenhouse structures are too costly for larger-scale production. They are also suffering from various caterpillar pests that are difficult to manage due to insecticide resistance. Thus, we conducted another field trial to examine insect exclusion nets as row cover without a screenhouse structure. In addition, farmers were educated on “Turn-the-Page” weed mat method for weed control, “Adopt the Insectary Plants” method to introduce beneficial insects and pollinators into the screenhouse, and “Trap Crop + biofumigation” method to manage nematode pests in the screenhouse. A total of three extension articles that have detailed procedures and prices to construct insect exclusion screenhouses or row covers were published in the University of Hawaii College of Tropical Agriculture and Human Resources (CTAHR) Sustainable and Organic Agriculture Program quarterly newsletter, Hanai’Ai, that reaches out to ~1000 readers in Hawaii including all organic farmers in the State. To use “Adopt the insectary plants” for screenhouses, two YouTube videos were produced to provide specific information on which insectary plants are appropriate to attract beneficial insects to prey on different target pests. Three public clients’ workshops were presented to statewide extension agents in Hawaii as well as farmers associations (Hawaii Farm Bureau, Hawaii Department of Agriculture, Hawaii Agriculture and Research Center, and Monsanto Hawaii). A summary of how to use oil radish as a trap crop and biofumigant against plant-parasitic nematodes for nematode management in a screenhouse is posted on the PI Website (https://gms.ctahr.hawaii.edu/gs/handler/getmedia.ashx?moid=4023&dt =3&g=12). These  resources are significant for organic farmers who are seeking non-chemical approaches for various pest management.

Due to growing environmental consciousness among consumers and growers, organic farming approaches are gaining popularity amongst vegetable farmers. However, organic farmers in Hawaii are concerned about the lack of effective, organic insect pest management tools (Radovich, 2009). Constructing screenhouses with insect exclusion nets for crop production has been practiced elsewhere and proven to reduce pesticide applications and increase crop yields compared to open field production (Romeo-Gámez et al., 2011). Purchasing fabricated screenhouses is extremely costly for farmers in Hawaii as it involves expensive shipping costs. Sugano et al. (2014) had developed protocols to construct affordable screenhouses using home improvement store supplies. Costs can be reduced for farmers if materials are procured from local hardware stores. Screening material can be sewn with UV resistant thread to meet the appropriate dimensions of the screenhouse. There is a reduced cost to farmers with materials from home improvement stores and screen material that can be sewn with UV resistant thread to get the desired width. Strong gusty winds during certain times of the year create a challenge for these structures to hold their shape and stay in place. This article modifies screenhouse designs from Sugano’s et al. (2014) publication to improve performance.

Unlike some of our U.S. mainland counter parts that had been using screenhouses or hoop houses to extend the crop-growing season into the winter, the main objective of the CTAHR screenhouse designs is for managing insect pests that are difficult to be managed with insecticides. Some pest examples include, pickle worm and melon fly on cucurbit crops, imported cabbage worm or other Lepidopteran pests on cabbage or other brassica crops, flea beetle on eggplant, rose beetle on strawberry, taro and many other crops. We used 17-mesh screen material that excludes larger size insect pests like listed above but not smaller soft body insects such as aphids, whiteflies, and thrips. Although mesh size can be substituted for a 60 mesh to exclude smaller insects, ventilation in the house will be significantly decreased and heat related stress can increase.

Unfortunately, high tunnel screenhouse crop production has several challenges. Pollination maybe compromised which is a problem for cross pollinated crops. In addition, natural enemies such as parasitic wasps, lady beetles, hoverflies, lacewings and so on will also be excluded, creating a risk of pest outbreak if the insect pests were to get in. The problem would be greater for organic producers that rely on mechanical weed management. With the screenhouse structure installed, farmers will be restricted to hand held rotovator or weed wacker which is more labor intensive than tractor driven rototillers. The difficulty of soil tillage in these structures could aggravate nematode problems. Organic farmers in Hawaii deal with plant-parasitic nematodes by growing a cover crop, sunn hemp, which produces nematode allelopathic compounds when soil incorporated. Clearly, whole-system sustainable pest management strategies need to be developed for high tunnel screenhouse production.

We are proposing to use the sequential weed mat covering approach known as “Turn the Page method” (TTP) developed by co-PI, DeFrank, who is a weed scientist. The concept is killing existing weeds or cover crops after initial weed wacking in a portion of the field by covering the soil with a light excluding tarp for 1 to 6 weeks depending on weed types and then plant cash crops with no-till. Crops are planted in the freshly uncovered areas while the tarp (or page) will be moved (or turn) to the adjacent weedy areas. Thus TTP offers a sequential weed management tactic without herbicide, tillage and avoids covering the entire screenhouse with expensive woven weed mat. Farmers can sequentially cover a quarter of the house at biweekly intervals, and plant their crop sequentially.

To address the issues of pollinators and beneficial insects being excluded by screenhouse, we propose “Adopt the Insectary” method. PI Wang had evaluated several insectary plants and developed insectary settings to attract pollinators and beneficial insects in Hawaii. Buckwheat and cilantro provide abundant pollen and nectar source for bees, hoverflies and wasps; Pigeon pea is a perennial that attracts lady beetles over a long period; Scarlet milkweed is a host for yellow aphids which are not pests for vegetable crops but are attractive to aphid parasitoids; Sunn hemp and pigeon pea attract Lycaenidae butterflies which are not vegetable pests, but draw Trichogamma wasps to parasitize their eggs; Sunn hemp also attracts alternative pollinators such as carpenter and leaf cutter bees (Wang, 2012). Installing wasps nesting blocks (Wang and Tavares, 2013) or bunched up cut bamboo sticks could serve as traps for these pollinators. Installing insectary garden adjacent the high tunnel screenhouse in the open field for one month, then flip the edge of the screenhouse to "adopt” the insectary settings into the screenhouse would attract beneficial insects inside. 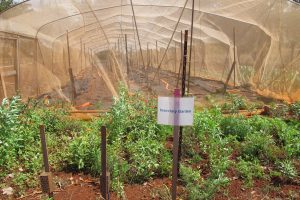 Insectary plants are planted outside of the screenhouse with a retractable screen.

Another common pest that the farmers might encountered inside a screenhouse and could not be managed through regular farming practice is plant-parasitic nematodes. We examine the potential to grow oil radish as a “Trap Crop” to trap root-knot nematodes and soil incorporate for biofumigation effect against other plant-parasitic nematodes. Oil radish is susceptible to root-knot nematodes, but if terminated within four weeks of growth, the nematode cannot fully complete its life cycle, and thus reducing the population of the nematodes in the soil prior to next crop planting. Oil radish is also a good biofumigant crop because it contains glucosinolates that can be converted into isothiocyanates upon contact by myrosinase in the damaged tissues. Isothiocyanates and other by-products of glucosinolate hydrolysis include sulfate ions are toxic to plant-parasitic nematodes. Biofumigation performed by oil radish residues following their trap cropping effect are effective ways to manage plant-parasitic nematodes as the nematodes are more vulnerable to biofumigation during their active stage when a susceptible host is present as oppose to when nematodes are in their survival stage in the absence of a host (Williams and Weil, 2004).

Specific objectives of this proposed project are to: