The Madison Soil & Water Conservation District located in Rexburg, Madison County, Idaho conducted a study as part of the Madison County Soil Health Initiative to provide data that shows sound Soil Health Practices such as Cover Crops, No-Tillage/Minimum Tillage, Variable Rate Fertilizing and diverse crop rotations will improve soil productivity, conserve irrigation water, increase resource savings, reduce erosion and be economically viable to agricultural producers. The study was a three-year study from 2015 to 2017. One of the main goals of this project was to reduce dependency on chemical applications. The second main goal was to improve the soils organic matter, this has and will continue to get accomplished. It is very difficult for most producers to change their farming practices. They generally will say “I will watch my neighbor as they change practices to see how well the new practices are working. That way I don’t have to worry about crop failures if the new practices don’t work”. We are so thankful for the producers that participated in this study who are on the cutting edge and willing to lead the way with cover crops, sound crop rotations, reducing and changing the way they fertilize and ever-changing ways of irrigating crops. One of the benefits of this study is that other producers are interested in the study results. Furthermore, we will be discussing soil health, soil and water conservation, irrigation, cover crops and rotations. Greg Blaser, Chairman of the Madison SWCD and lead for the Madison County Soil Health Initiative, grew up on a dairy farm west of Rexburg. The rotation on his farm was alfalfa, barley and a few acres of potatoes. Most of the farmers he associated with also had some livestock. Therefore, the potatoes were small acreages. Also at that time, the Rexburg Bench, southeast of Rexburg, was dry farm. The Egin Bench, northwest of Rexburg, was irrigated by sub irrigation. Approximately 25,000 acres sub-irrigated. The sub was brought to the crops by running water in ditches, flooding alfalfa, anything to bring up the water table. Even though plows and heavy discs were used for tillage, because of the rotations, manures etc. There was very little soil loss.

Utilizing five agricultural producers and 14 fields each of the three years of the study, partnering with the Natural Resource Conservation Service, SIMPLOT Grower Solutions soil samples and tests were taken to establish a beginning base line for both physical and biological properties of the soil. These fields were monitored for three years using same soil testing and analysis procedures to determine changes due to adoption of soil health practices. In addition, the producers tracked and recorded crop production inputs and outputs along with costs. These inputs were collected each of the three years to determine the cost effectiveness of the soil health practices.

Water conservation -irrigation
In the 60’s and 70’s, approximately 65% of the irrigation in the State was surface irrigation. This was accomplished with flooding, water down the rows and gated pipes. 35% of irrigation was with sprinklers and drip systems. As irrigated acres increased, and dryland acres went to irrigation, this percentage changed to 50-50, and later to 70-75% sprinkler and 20-25% surface.
As producers changed to sprinkler, it was said that this way is a huge saving and that growers would make more money. Water Conservation. Though true, there were also some issues. With wells being drilled for irrigation, also came a reduction in the water table. This caused a reduction in domestic wells and existing farm wells. The Egin Bench water table dropped causing domestic wells drying up and the need for deeper drilling. Mud Lake was also affected as was Thousand Springs. Also, there was a loss of winter water in the canals to reduce “Wasted Water”. This was basically untrue. With the loss of winter water, no recharge took place.
Sprinklers are not bad. It gave the opportunity for the Rexburg Bench and other dryland areas to raise great crops. However, as sprinklers (hand lines, wheel lines, pivots, linear, etc.) came on line, some growers felt that irrigation was easy. Just turn on the system and don’t worry about it. This of course is not true as the systems began to wear out and parts broke and wore out. There have been studies estimating that with broken pipe, plugged or leaking nozzles, and poor maintenance, the sprinkler system were only 50-60% efficient. I am not opposed to sprinklers, just the poor maintenance on some systems. If the weather (wind) is involved, the percent efficiency lowers even more.
One of our study participants has used the Low Elevation Spray Application (LESA) system on one tower. Other growers are also using the system on alfalfa, potatoes, small grains, and pastures. Larsen Farms in Hamer have several pivots that started out as LESA, but were changed to Low Elevation Precision Application (LEPA). Growers that are using this system are finding a reduction of 1/3 or more less water to grow equally good crops.
Two years ago, the Water Resources of Idaho began a project to recharge water in the Snake River Aquifer on the Egin Bench as well as other places across the State. Water is taken from the canal system and sent to the desert below the St. Anthony sands dunes. This recharge looks very promising to help the water table. There is still effort to be made to improve water conservation in Idaho. As growers see this need they generally are anxious to help conserve water in their own operations. 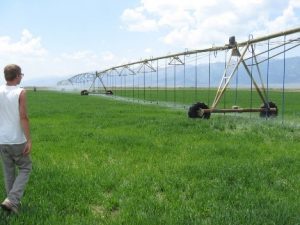 Minimum – Conservation-No – Tillage
As farming practices have changed over the years. Note: With the increase of tillage throughout the Nation and State, there is also increase in Soil Erosion. Of special note: “The dust bowl” in the Midwest. However, we also have issues with our own dust bowl. As farming practices changed with more tillage and less cropping systems i.e. forages and other rotations, there became a decrease in soil conservation. In the 60’s most farmers I knew had discs and plows that they used all the time. There was some soil erosion, but with manures, rotations of legumes and other practices, there was very little soil movement.
Later growers changed to a rotation of potatoes and small grains (wheat and barley). With this reduction of cropping systems came an increase of erosion. The Egin Bench has even more soil erosion. I have seen sand drifted over the north south roads 2 to 3 feet deep after a daylong windstorm. Growers with heavier soils don’t have the same problems, but still erosion occurs.
In 1976 Dr. John Walker came to then Ricks College from Midwest with a strange grain drill. This machine was a Concord No-Till grain drill. This was the first time most people in southeast Idaho had even heard of such a machine. With this drill the need for soil preparation plowing and disking for small grains was eliminated. A few growers were interested, and a few hundred acres were planted. However, most growers were not interested. John had the oldest no-till dryland wheat plot in the nation.
In recent years there has been an increase in conservation/no-till planters. Many of the major equipment companies are involved in the production of No-Till or Zero tillage drills. Growers on the Sare Grant list are among those using these drills. They are finding good results from this operation. One grower has even planted no-till potatoes and the results are very promising. With reduced tillage comes less wind erosion and soil protection. There is also an increase in Organic Matter and moisture availability. 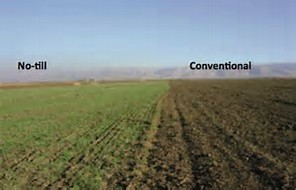 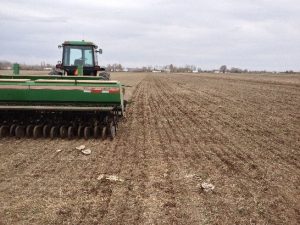 Cover crops & Rotation crops
There are growers in southeast Idaho that plant spring barley after fall potato harvest. The barley provides a good cover to stop potential wind erosion. The spring barley will die out in the winter; however, it still provides good soil protection. In the spring the barley is replanted with a no-till drill. The goal has been achieved. With the residue from the fall planting and the spring growth there will be very limited soil movement with the spring winds. This same producer also plants two pivots of alfalfa. Not only does the alfalfa prevent soil erosion, but also provides N fixation for future crops. This grower has gone from potatoes-barley—potatoes, to alfalfa for organic matter.
Another grower plants a cereal and leaves the stubble after harvest and then plants peas for seed in the spring. He has found a good market for pea seed as well as providing good N Fixation, and reduced soil erosion.
Another grower with cattle grows alfalfa and grass for grazing in the spring and fall, and for winter feed. He also plants winter wheat and following harvest in late summer will plant cover crops. Oil Mustard is his choice and he has found some indication that the mustard reduces the nematode population in potatoes.
Another grower plants radish in the fall after wheat harvest. He is finding not only the radish in the stubble prevents soil movement, but also provides water penetration for future crops.
Over the last few years there has been several hundred acres planted into cover crops with great success following. Even with cover crop success there are a few growers that have not found the same success. However, these growers are still using cropping systems to help soil health. 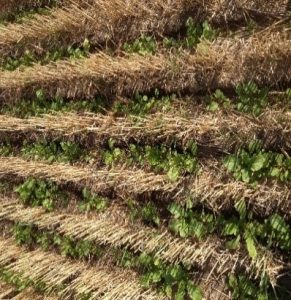 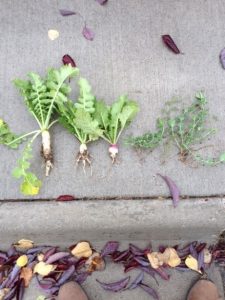 Conclusion
As you can see with the grower summaries which are enclosed to this report, they are all very successful. They all do things different, but are willing to try something new which is the key to increasing soil health, conserving water and increasing agricultural productivity. We are finding as other producers look at these studies, they are willing to increase soil and water conservation and improve their soil health practices.
What this study has found is the benefits of healthy soil in sustaining crop production are most evident when growing conditions are less than ideal. Healthy soils increase the capacity of crops to withstand weather variability, including short term extreme precipitation events and intra-seasonal drought. Over or increased tillage of the soil breaks down and diminishes the soils organic matter thus reducing the quality of the soil and effecting crops quality and quantity.
So what influences soil health? Soil management practices, cropping systems, and weather conditions influence soil health. Therefore, a healthy soil that is well managed can increase soil water infiltration and storage, storage and supply of nutrients to plants, microbial diversity, and soil carbon storage. Soil organic matter (SOM) is a central soil property that is heavily affected by management practices, which in turn influences soil physical, biological, and chemical functions.
Attached below are soil health practice summaries from the five agricultural producers in their own words that participated in this study over the past three years.

This has been a great project for the Madison Soil and Water Conservation District and the agricultural producers not only in Madison County but southeast Idaho as well. We appreciate the opportunity to conduct this study and want to thank Utah State and Western SARE for providing this opportunity.