The Madison Soil & Water Conservation District located in Rexburg, Madison County, Idaho is conducting a study as part of the Madison County Soil Health Initiative to provide data that show sound Soil Health Practices such as Cover Crops, No-Tillage/Minimum Tillage, Variable Rate Fertilizing and diverse crop rotations will improve soil productivity, conserve irrigation water, increase resource savings, reduce erosion and be economically viable to agricultural producers. 2016 is the second year of this three year study.  One of the main goals of this project is to reduce dependency on chemical applications.  The second main goal is to improve the soils organic matter.  It is very difficult for most producers to change their farming practices.  They generally will say “I will watch my neighbor as they change practices to see how well the new practices are working.  That way I don’t have to worry about crop failures if the new practices don’t work”.  We are so thankful for the producers participating in this study who are on the cutting edge and willing to lead the way with cover crops, sound crop rotations, reducing and changing the way they fertilize and ever changing ways of irrigating crops.  One of the benefits of this study is that other producers are interested in the study results.

Utilizing five agricultural producers and 14 fields, partnering with the Natural Resource Conservation Service, SIMPLOT Grower Solutions soil samples and tests were taken to establish a beginning base line for both physical and biological properties of the soil. These fields are being monitored for three years using same soil testing and analysis procedures to determine changes due to adoption of soil health practices.  2016 was our second year of monitoring.  In addition, the producers are tracking and recording crop production inputs and outputs along with costs.  These inputs are being collected each of the three years to determine the cost effectiveness of the soil health practices.

Data continues to be collected on the 14 test fields as was mentioned in the summary. The five growers participating in this study are doing some very innovative conservation practices, not necessarily new, but missing from their traditional production of many years.  Because of mandatory water reduction through ever changing laws and regulations, Low Elevation Spray Applications (LESA) is beginning to move ahead that will potentially reduce not only the amount of water but also reduce electricity and equipment costs while either increasing yields or keeping them close to traditional numbers.  Two growers are planting legumes (peas, alfalfa) and then thickening up with triticale following the cropping year and utilizing for grazing.  Then grow potatoes to utilize the nitrogen fixation as well as cattle waste the following spring.  One grower plants spring barley in the fall after potatoes to keep the soil stable.  In the spring he then replants spring barley.  This grower farms in very sandy soil near the St. Anthony sand dunes north west of Rexburg.  Over 600 acres of cover crops were planted in the fall of 2015 for utilization in the 2016 cropping year.

With cereal (2 years) and potatoes (1 year) – costs for the grower is less due to the reduced amount of fertilizer and chemicals needed due to no tillage.

This grower has been planting cover crops for the last three years. Has no tillage grain drill which reduced tillage costs 10 to 20 percent.

Grower is planning on planting two acres of no tillage potatoes in 2017.

Grower purchased a no tillage drill which reduces the costs of tillage.

The slight decrease in yield on test field 2 (wheat) is due to the conversion to the Low Elevation Spray Application (LESA) system. There was an increase in potatoes.  Water savings were from 1/3 to ½ of normal usage.  Very significant water savings.

The LESA system was introduced on a linear pivot. The advantage of this was the spray nozzle sizes were all the same.  The LESA tower was between the existing towers making it very easy to gather data.

The grower was concerned with erosion on a three percent slope. There was no erosion. 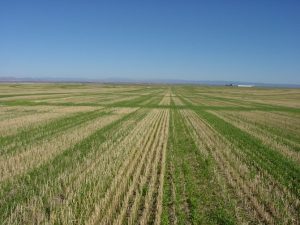 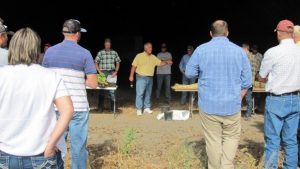 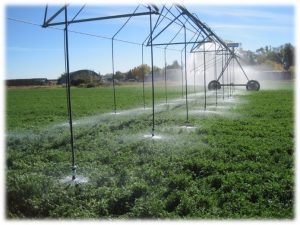 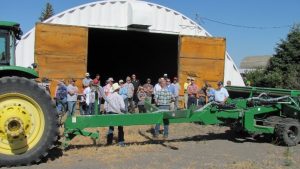